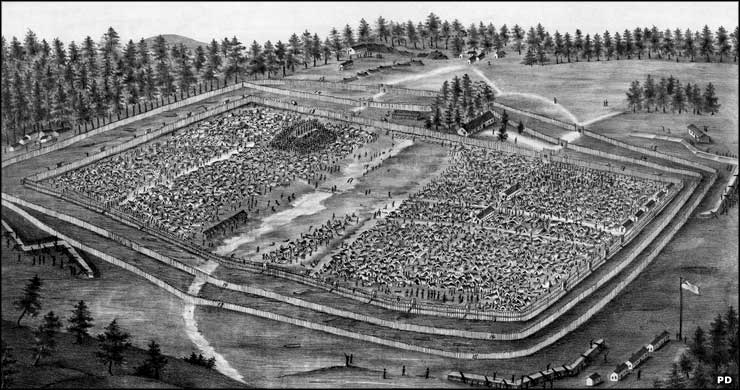 Andersonville Camp, as seen by John Ransom
(Author/Publisher of "The Andersonville Diary, Escape and List of the Dead") 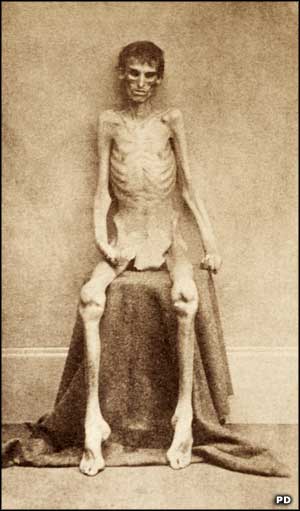 A survivor of Andersonville

Andersonville was a prisoner-of-war camp at Fort Sumter in Andersonville, GA. The prison was in operation for 14 months and more than 45,000 Union troops passed through there. Of those, almost 13,000 died there, making Andersonville the deadliest parcel of non-battlefield land in the American Civil War. Andersonville is the only park in the National Parks System that serves as a memorial to all American prisoners of war.

Of all the prisoner-of-war camps around the world where American soldiers have been held, Andersonville is widely considered to have been one of the most horrific simply because of the number of prisoners who died there. The prison camp was crammed to at least four times capacity with an inadequate water supply, unsanitary septic conditions and reduced (often severely reduced) food rations. The primary causes of death were scurvy, dysentery and diarrhea... but most of the men held at Andersonville were starved to the point where no recovery was possible from even everyday ailments.

The prison was opened in February 1864 and originally was a 16.5-acre parcel enclosed within a 15-foot high stockade. The camp was expanded in June 1864 to 26.5 acres. About 19 feet inside the stockade was a light fence known as "the dead line": anyone who approached too closely, touched or crossed the dead line was shot without warning by the Confederate soldiers manning the the pigeon roosts along the stockade. Hundreds of men died as a result of getting too close to the dead line.

The Confederate government under-supplied the fort with food, both for the guards and the prisoners. The guards, though, never developed scurvy and never starved to emaciation like the Union prisoners in their care. Even when food supplies were better, the prisoners couldn't do much with the poorly milled corn flour because there were no utensils for cooking.

The overcrowding forced the men to use Stockade Creek (their primary drinking water supply) for bathing. In the heart of the camp was a 4-acre "swamp" composed of raw sewage. And even with all these general problems, a group of Union prisoners (the Andersonville Raiders) regularly attacked their fellow inmates to steal money, jewelry, food and clothing. Armed mostly with clubs, they often killed to get what they wanted. Eventually, a group was organized (the Regulators) who caught nearly all the Raiders, tried them and carried out various punishments on those convicted, up to and including hanging.

The Confederate officer in charge of Andersonville, Captain Henry Wirz, decided conditions were so poor in July 1864 that he sent five Union prisoners to Washington DC with a petition signed by the majority of Andersonville's prisoners requesting that the Union reinstate prisoner exchanges... but Congress denied the request and those five soldiers returned to Andersonville with the bad news. By August 1864, there were almost 33,000 Union prisoners at the camp. Then in early August General William Tecumseh Sherman and his Union Army attacked nearby Atlanta. It took a while for Atlanta to fall but during and after the battle, many of the Union prisoners were moved to other camps, then moved back to Andersonville. After the surrender of Atlanta, conditions at Andersonville improved a bit but overall circumstances didn't really change until the prison was liberated and everyone released in May 1865.

Dorence Atwater, a young Union prisoner who was among the first to be sent to Andersonville, was chosen by Captain Wirz to record the names and numbers of the Union dead for the Confederate and federal governments to have after the war was ended. Believing the list would never be seen by the Union, Atwater kept a list for Wirz and the second for himself. When the camp was liberated, he smuggled his list out and went back to his home in Connecticut. His efforts to make the Death List public got him dishonorably discharged and sent to prison by one of those reactionary "cliques" the federal government has been controlled by over the years. Clara Barton (who at that time was in charge of the Office of Missing Soldiers) came to his rescue and he was shortly released with a full Presidential pardon. He then traveled with Barton to the Andersonville site to help place names on the graves of the Union soldiers buried there.

In 1890, the Georgia branch of the Grand Army of the Republic bought the site but had no funds to do anything with it. Shortly they transferred the property to the Woman's Relief Corps (an auxiliary of the Grand Army of the Republic) and the WRC made many improvements to the property with the idea of creating a memorial park. In 1910, the Woman's Relief Corps donated the property to the people of the United States and it was administered by the War Department and Department of the Army until Congress finally designated the site a National Historic Site in 1970. Since July 1, 1971, the park has been administered by the National Park Service.

Between 1898 and 1916 a number of individual states erected monuments on the Andersonville site to commemorate the soldiers each state has buried there. Since that time, the cemetery has become the Andersonville National Cemetery and soldiers from World Wars I and II, Korea, Vietnam and other, more recent conflicts are buried there. 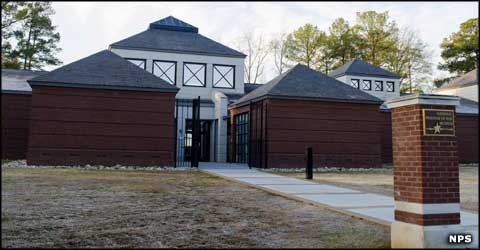 The National Prisoner of War Museum

The National Prisoner of War Museum opened at Andersonville in 1998 as a memorial to all American prisoners of war. Exhibits in the museum use photographs, art, artifact displays and video presentations that focus on the capture, hardships, living conditions and experiences of American prisoners of war in all periods of US history. The Museum is now also the visitor center for the whole park.

The site of Camp Sumter is now outlined with double rows of white posts (signifying the stockade wall and the death line inside the wall). The north gate and the northeast corner of the stockade have also been reconstructed. Most monuments within the park are in the northern section of the camp. The original site of Camp Sumter occupied about 25.6 acres while the Andersonville National Historic Site now preserves some 514 acres.

The grounds of Andersonville National Historic Site are open daily from 8 am to 5 pm EST except for Thanksgiving, Christmas and New Year's Days. There are no fees involved. The property is located in southwest Georgia on State Road 49, about 11 miles south of Montezuma and 12 miles north of Americus, about 1 mile north of the town of Andersonville. 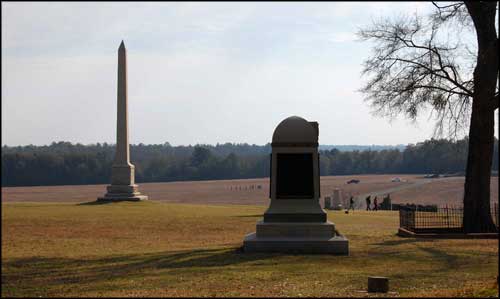