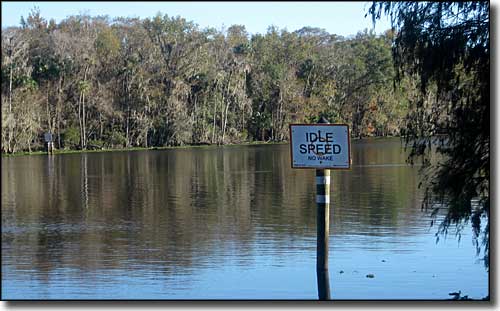 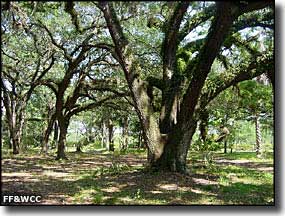 Lake George State Forest is comprised of three tracts of land totaling some 21,176 acres. Vegetation on the property is a mix of bottomland hardwoods, longleaf pine, slash pine, open pasture and interspersed cypress and bay swamp. Nearly half the forest was burned off during the 1998 summer wildfire season. Recovery from that catastrophic event has included harvesting the salvage timber and replanting with slash and longleaf pine.

Lake George State Forest is located near the towns of Astor and Barberville in northwestern Volusia County. On the forest is the Bluffton Recreation Area, containing what's left of the Bluffton Mound and Midden. Originally, the Bluffton Mound and Midden was a huge pile of the remains of freshwater shellfish built up by Native American tribes hundreds of years ago. More recently, the mounds have been excavated to provide road building materials for the county and state. You'll find a 3/4-mile interpretive trail along the St. Johns River at the Bluffton Recreation Area. There's also restrooms, fishing, parking and primitive campsites available there. The western boundary of Lake George State Forest is against the St. Johns River and, while there are no public boat ramps on the forest, there are several boat launch sites on the river bank. The State Forest is just one of several publicly owned properties in the area that almost completely surround Lake George, the second largest natural lake in Florida.

Logging canals were dug through the swamps in this area before 1910 as timber harvesters went after the old growth cypress. By the 1930's, most of the forest had grown back in longleaf pine and slash pine. That was harvested again in the 1960's and then replanted almost completely with slash pine.

Lake George State Forest is open to the public from dawn to dusk, every day of the year. Recreational activities include hiking, biking, horseback riding, picnicking, photography, wildlife watching, fishing, boating, canoeing and seasonal hunting. Primitive camping is also allowed (except during certain hunting seasons) but you'll need to get a State Forest Use Permit first.

Parts of the forest make up the Dexter/Mary Farms Unit and part of the Lake George Wildlife Management Area, both managed by the Florida Fish & Wildlife Conservation Commission. The Lake George Wildlife Management Area also includes land under the jurisdiction of the St. Johns River Water Management District. The Dexter/Mary Farms Unit abuts the Lake Woodruff National Wildlife Refuge to the south and De Leon Springs State Park to the east.

This is an area where you might come across Sherman's fox squirrel, Florida black bear, bobcat, otter, white-tailed deer, American alligator, armadillo, coyote and gopher tortoise on the ground. In the air might be osprey, bald eagle, limpkin, swallow-tailed kite and various species of heron, hawk and owl. 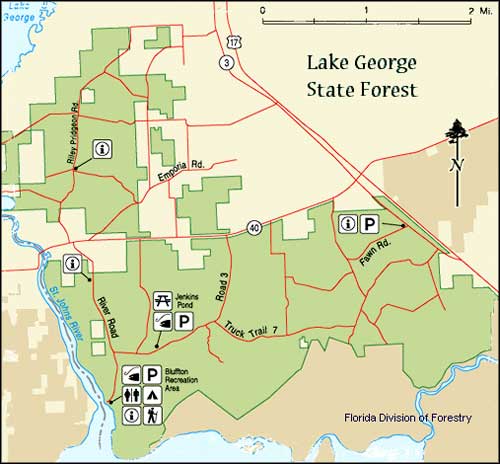