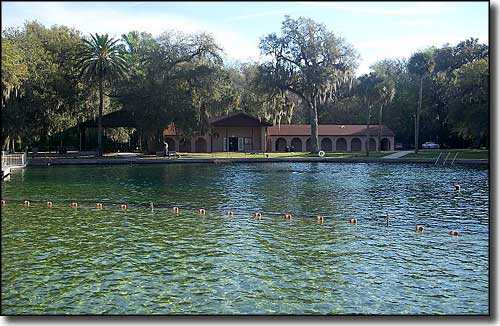 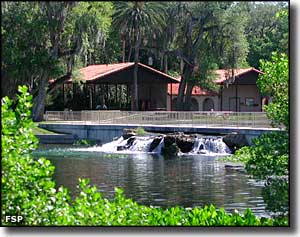 De Leon Springs State Park is comprised of some 611 acres in De Leon Spring (Volusia County). The centerpiece of the park is De Leon Springs, a natural soda-and-sulfur spring flowing about 20,000,000 gallons of water every day at a constant temperature of 72°F. De Leon Springs State Park sits midway between Ocala National Forest and the Tiger Bay State Forest and Wildlife Management Area. In this position, you might come across Florida black bears migrating back and forth with the seasons. In the winter, the springs also often plays host to manatees looking for warmer waters to hang out in. You'll also find American alligators, turtles, otters and white-tailed deer on the property. Birds come and go with the seasons, too, but you'll often see great blue herons, American white ibis, belted kingfishers, bald eagles, ospreys, egrets, limpkins, hawks and vultures.

Native American tribes started leaving indicators of their presence behind as much as 8,000 years ago (a dugout canoe found on the property was dated to at least 6,000 BCE). The Spanish arrived in the 1500's (the name of the place is derived from the supposed presence of Ponce de Leon in his famous search for the "Fountain of Eternal Youth"). The Spanish government granted land rights to settlers who established a cotton, corn and sugar cane plantation nearby in 1783. That was also about the same time the first Seminole entered the area, looking to escape from the American menace to the north. Then the American government took possession of Florida in 1821 and the natives fortunes went downhill from there.

A Colonel Orlando Rees built a grinding mill near the springs to grind the sugar cane and mill the corn grown locally. The Seminoles were chased off shortly but returned during the Second Seminole War and sacked the plantation. The US Army, led by General Zachary Taylor, regained control of the area in 1838 and pushed the Seminoles either to Oklahoma or into the swamps of the Everglades. The grinding mill survived the general destruction of the plantation again during the Civil War and is still in use as a local pancake restaurant. The springs began gaining a reputation for their "rejuvenating" properties in the 1880's, when they first started getting advertised as a fountain of youth. Florida bought the property in 1982 and turned the former resort into a state park.

Fishing, canoeing and kayaking are allowed in the spring run but swimming is restricted to designated areas... something about the presence of alligators. De Leon Springs State Park is a site on the Great Florida Birding Trail and you can also board a boat here for a guided eco-tour of the adjacent Lake Woodruff National Wildlife Refuge. There are several hiking trails available, including one that ends at Monkey Island: a site where monkeys escaped from various circuses over the years have congregated. Among the other amenities offered by De Leon Springs State Park are volleyball courts, a playground, pavilions, picnic areas with tables and grills, a boat ramp, fishing pier, dock and an enclosed swimming area. The visitor center also offers exhibits about the natural history, native cultures and modern historical events centered around the park. 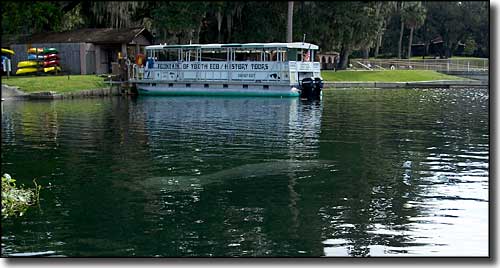 There's a manatee underwater, below the tour boat in the photo 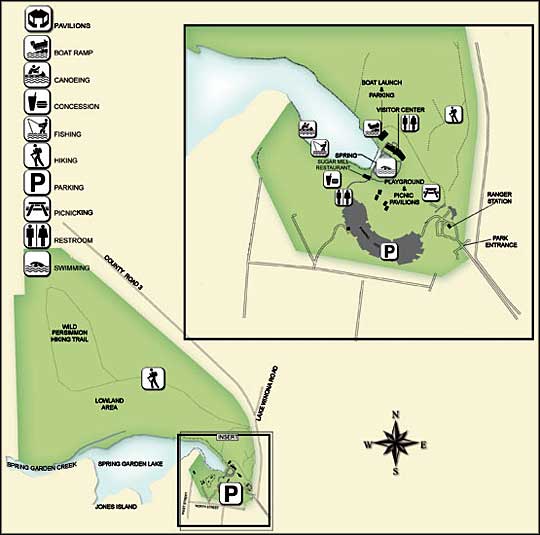