The 66,280 acres of Dominguez Canyon Wilderness are wholly contained within the boundaries of Dominguez-Escalante National Conservation Area. The wilderness was designated by Congress in 2009 and is made up of most of what was previously the Dominguez Canyon Wilderness Study Area. Vegetation varies from pinon-juniper woodlands near the Gunnison River to Ponderosa pine, Douglas fir and aspens in the higher reaches. The Gunnison River itself is not part of the wilderness but does act as a boundary.

There was a private property in Little Dominguez Canyon that was bought by the BLM in 1988. The individual who sold the property was granted a life lease on it - meaning he was allowed to live out the remainder of his life on the property and continue to use it as he had for so many years before. Then full use and control of the property would transfer to the BLM.

This is an area of rugged, water-carved mesas covered with dense stands of pinyon and juniper. Little Dominguez Creek flows year round, creating a long, narrow riparian zone inhabited by many reptiles, birds and mammals. Big Dominguez Creek offers year-round fishing opportunities. The area has mountain lion, black bear, mule deer, elk, coyote, golden eagle, wild turkey and collared lizard. Desert bighorn sheep were re-introduced in the 1990's and the growing herd can often be seen grazing at the foot of the cliffs in the wilderness.

There is evidence all through Dominguez Canyon Wilderness of thousands of years of use for hunting, fishing and as a travel corridor connecting the Gunnison River Valley with the upper Uncompahgre plateau. There are the remains of many wikiups on the mesas and many panels of prehistoric rock art on the canyon walls. Some of that rock art is up to 2,000 years old and is fading in places due to the ravages if time and weather. You might also come across areas that still show traces of early miners and settlers who tried to eke out a living in this wild and woolly countryside back in the early days of Euro-American settlement.

The map below shows several points of access to the wilderness, including campgrounds and trail heads along most of the boundaries. 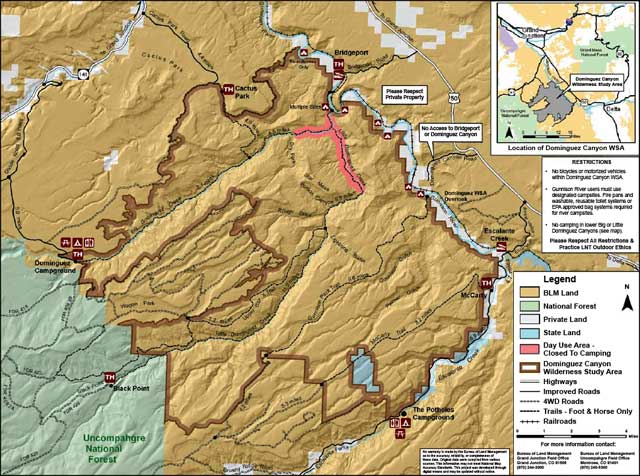