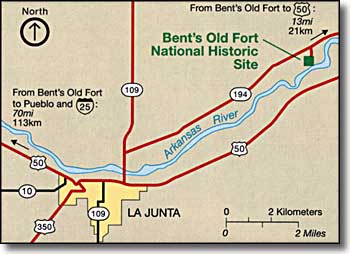 In the decades after the 1803 Louisiana Purchase, America's economic frontier expanded westward. As trappers went into the Rockies for beaver and Plains Indians showed their willingness to trade buffalo robes for American manufactured and luxury goods, the first wagons rolled between the Missouri River and Santa Fe. Bents Old Fort (although it was originally called Fort William) was built in 1832-3 by Charles and William Bent and Ceran St. Vrain, specifically to take advantage of its location on the north bank of the Arkansas River, on the Mountain Branch of the Santa Fe Trail (in those days, the Arkansas was the international border between Mexico and the United States). William Bent made his first crossing of the Trail in 1829 (in a trading train that saw his older brother Charles as the Wagon Master). It was on this trip that William first met Kit Carson and they became lifelong friends.

Sometime later that year (1829), William went trapping with a few other men. He built a picket stockade somewhere near where Pueblo is now and his group was trapping beaver for several months. During this time "Little White Man" was visited by a group of Cheyenne who hung out for a few days. When the Cheyenne left, a couple of younger braves stayed with William''s group. Suddenly a party of Comanches appeared and William had to make a quick decision: the Cheyenne and Comanche were deadly enemies. He had to decide whether to turn the two Cheyennes over to the Comanches (to be killed) or to hide them, bluff his way through and potentially save their lives... or lose everyone's life. He chose to hide the men among his baggage. The Comanche saw the Cheyenne footprints and demanded that William turn them over. William patiently explained that the Cheyenne had visited but had then moved on. His ruse was successful and there was no trouble. This incident made him a hero of the Cheyennes for the rest of his life. When he married Gray Thunder's daughter Owl Woman a few years later, the relationship was carved in concrete (Gray Thunder was one of the principal Cheyenne chiefs). The Bent's never had a problem with either the Cheyenne or the Arapaho afterward.

The Bent brothers entered into a partnership with Ceran St. Vrain in 1830. They opened company stores in Santa Fe and Taos and plied the whole length of the Trail with their goods. Their business grew rapidly, carrying goods and freight between Santa Fe and Independence, Missouri (in 1831, they made 5 round trips of the Santa Fe Trail and claimed a good portion of the $500,000 in profits made that year). It quickly became clear that a stopping place in the middle of the journey would be quite useful, so they imported Mexican laborers (men and women) and built the fort. For travelers 2 months on the Trail, it became a greatly anticipated haven, the only place between Independence and Santa Fe where they could safely refresh themselves and their livestock, repair wagons, and replenish supplies.

The fort was 137 feet by 178 feet with walls 14 feet high and 30 inches thick. The main gate 9 feet wide and 7 feet high and built with great planks of wood sheathed with iron bands. It contained some 25 rooms built on 2 levels.

Charles Bent ran the Santa Fe store, but he lived in Taos and made regular seasonal trips back to St. Louis. Ceran St. Vrain ran the Taos store. William ran the Indian and trapper trade at Bents Fort. Charles married into the prominent Jaramillo family of Taos and used his influence to smooth the way for American trade. Ceran St. Vrain served as the American consul in Santa Fe in the 1830's and (with Charles Bent's great-uncle-in-law Cornelio Vigil) was the recipient of some 4 million acres spread across south-eastern Colorado as part owner of the Vigil-St. Vrain Land Grant. William married a Cheyenne named Owl Woman and split his time between the Fort and her village. William is the one most responsible for the company's excellent reputation among the Native American tribes. And his reputation was such that in 1835, Gen. Henry Dodge came to the Fort to organize a peace council between the friendly Cheyenne and Arapaho and their old enemies, the Pawnee. The Bents were highly invested in these talks because peace on the prairies was really good for business. The tribes respected William so much that the Fort was essentially "neutral ground" and warring tribes could go there and discuss peace in safety. Over the years, several inter-tribal councils were held at Bents Fort for the same purpose.

William worked hard to keep alcohol off the trading menu and that was appreciated greatly (the tribes demanded alcohol but he refused to bring it out during the trading process: once all trading was finished, he'd leave a barrel with the chief to be opened after the traders left). He also trained and educated his traders well and because they were known to work for William, his traders were welcomed into every village they were sent to. Bent, St. Vrain & Company was a fair and very prosperous business. Before long, the company dominated the Indian trade in the southwest. So effective were the Bents as peacemakers among the Indians, in 1846 the fort was used as headquarters for the Upper Platte and Arkansas Indian Agency when that was first established.

The center of the fort, with the pelt press

That year the Texans finally provoked the American government into going to war with Mexico and the fort's strategic location on an established road made it an ideal point for launching an invasion into the northern provinces of Mexico. Under Colonel (later General) Stephen Watts Kearny, the Army of the West began its march west from Missouri and stopped at Bents Fort to prepare themselves before crossing the Arkansas and entering Mexican territory. Soldiers were quartered inside and all around the fort. All the storerooms were filled with military supplies and their multitude of grazing livestock stripped the nearby countryside bare of forage. They waited some time at Bent's Fort while new units arrived (the Mormon Battalion being one of them) and the army medical personnel separated out the sick and the lame and sent them elsewhere before moving into Mexico's northern province. By the time Kearny and company left, business (and livability) at Bents Fort was nearly destroyed.

Immediately behind the Army was a growing stream of settlers and goldseekers who came, basically, to rape and pillage the land: polluting water holes, clear-cutting all the tree cover, killing all the bison, and infecting the Native Americans with European diseases (cholera, in particular) that nearly wiped them out. By the end of 1847, the Bent & St. Vrain Co.'s carefully nurtured trade with the Plains tribes was finished, killed by what later became known by the Anglo conquerors as "Manifest Destiny." (What's really interesting here is that, for the most part, the tribes were pretty friendly with the European invaders up until the time of the heavy influx of gold-seekers. Before 1858, the tribes seldom attacked unless they were first attacked, but they would steal anything that was easy to take, especially horses.)

On the way south, Kearny sent a letter ahead to the Mexican governor in Santa Fe saying that he was coming with his troops and he was intent on conquering Nuevo Mexico for the Americans. When the Army arrived in Santa Fe, they discovered that the Mexicans had packed up and run south to Chihuahua. The Army of the West took New Mexico without firing a shot. Before they headed south to make sure the Mexicans had retreated beyond the Rio Bravo at El Paso, Charles Bent was appointed Provisional Governor of New Mexico Territory. The Army then marched down to La Mesilla (on the outskirts of today's Las Cruces) and then headed west across the desert to San Diego in order to give some substance to later American land claims when the Treaty of Guadalupe Hidalgo was finally signed in 1848.

In January, 1847, there was a bloody uprising in Taos of Hispanics and Taos Pueblo Indians. They killed a number of prominent members of the American and Mexican community in Taos, Charles Bent and Cornelio Vigil among them. A couple days later, members of the American community in Santa Fe converged on Taos and extracted bloody revenge on the rebels, capturing many of them and publicly hanging quite a few on the Plaza in Taos. There was a similar uprising in Mora at the same time and the Americans put down the rebellion there in just as bloody a manner, even shooting the women and children they found before burning the settlement to the ground. 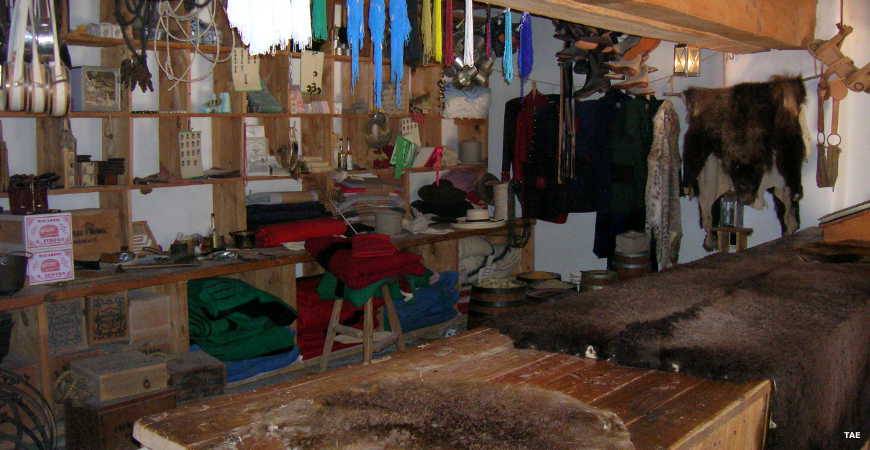 Charlotte Green, a black slave brought from St. Louis with her husband Dick and his brother Andrew, was the main cook and oversaw all the household stuff at Bents Fort. When the Taos Uprising happened, Dick was in Santa Fe dealing with business for Charles. He returned to Taos with the other Americans and was wounded badly in the fighting that took place. When he returned to Bents Fort and related his story to William, William immediately freed all the Greens. They headed east over the Santa Fe Trail in May, 1847, and settled in St. Louis. (The Bents and St. Vrain all came from slave country. Charles inherited the Greens but once they were freed, there were no more slaves associated with any of them.)

With their business at Bents Fort in ruins, 1848 saw St. Vrain trying to sell the place to the US Army. But the Army had other ideas (they built the first fort at Fort Union in 1851 and built Fort Massachusetts in the San Luis Valley a couple years later). Supposedly, William Bent then tried to burn the adobe fort in 1849 before he moved his business downstream 40 miles to Big Timbers (near present-day John Martin Reservoir), where he built Bents New Fort in 1853. What was left of Bent's Old Fort was used as a stage stop during the 1860's and up until the railroads arrived in the mid-1880's. Then the fort was almost completely abandoned.

When visiting Bents Old Fort now, what you'll see is a reconstruction of the original Fort with similar materials, based on detailed drawings, contemporary descriptions and archaeological findings. Most of the furnishings are reproductions. On the upper level is the Susan Magoffin room: normally the resident doctor's quarters but Susan arrived at the fort on her 19th birthday and suffered a miscarriage the next day. She was confined to the room during her 12-day stay in 1846. (During her stay, she saw a Cheyenne woman give birth and, half-an-hour later, watched as the woman picked up her baby and took it down to the river to wash and clean up. We wouldn't know of this story except she wrote about it in her diary and she made some comments in regards to the difference between the Cheyenne woman's mind-set and her own re: childbirth.)

The National Park Service offers tours, programs, a short film and other interpretive activities for visitors. The park is open every day of the year except Thanksgiving, Christmas and New Year's Days. Summer hours run from June 1 through August 31 with the park open from 8 am to 5:30 pm. Winter hours mean the park is open the rest of the year from 9 am to 4 pm. 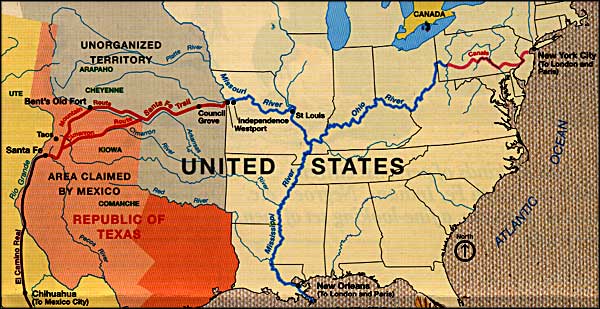