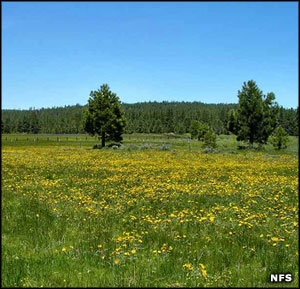 Tahoe National Forest is one of the most popular national forests in the United States with several major travel corridors across the forest offering easy access to an extensive array of campgrounds, boat ramps, hiking/biking trails and picnic areas. In winter the multiple ski areas on the forest are in full swing, along with extensive snowmobile and cross-country ski trails.

The Placer Big Trees grove on Tahoe National Forest is the northernmost naturally occurring stand of Giant Sequoias in California. This designated Botanical Special Interest Area is located about 22 miles east of Foresthill and overlooks the canyon of the Middle Fork American River. It's a small grove with maybe eight large sequoias, two of which are rated as "giant."

During the wild times following the Comstock Lode discovery in Nevada, a large portion of Tahoe National Forest was clear cut to provide timbers for the many underground silver mines that quickly populated the landscape around Virginia City, Nevada. That has led to today's forest being homogenous in terms of the relative age of much of the tree cover: it was all cut at once and all reseeded at once. There is supposed to be still some 84,000 acres of old growth on the forest, including Coast Douglas fir, white fir, Ponderosa pine, sugar pine, California black oak, California incense cedar, lodgepole pine and red fir.