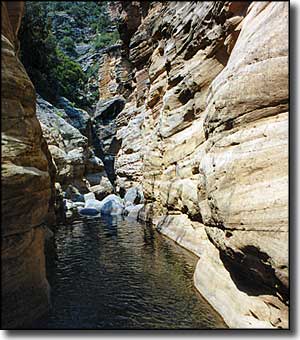 West Clear Creek Wilderness stretches up into the Mogollon Rim country for about 20 miles from the parking area at the west end of the wilderness. There is little in the way of established trails although the lower reaches of West Clear Creek do often see fishermen coming to try their luck. If someone is intent on "hiking" the length of the canyon, they need to be prepared for many areas where the only way forward is to swim/float across long, narrow pools of water, some of them more than 1/4-mile long. There are a few waterfalls to scale, too.

The upper canyon rim can be accessed via a number of Forest Service roads but there are only a couple trails that make the descent to the canyon bottom. From the parking area at Bull Pen Ranch, there is a reasonably easy route that follows the creek for about six miles before climbing the northern slope to the top of the canyon. The canyon bottom is mostly a riparian corridor filled with cottonwood, alder, sycamore, mountain mahogany, willow and native grasses as Clear Creek flows year-round. Just upslope is where the pinion-juniper woodland begins. At the top of the canyon, you'll find a forest of Ponderosa pine and Gambel oak. For wildlife you might come across mule deer, black bear, bobcat, mountain lion, beaver, river otter and other small mammals. You also need to be aware of the presence of rattlesnakes, centipedes and scorpions: don't put your hands where you can't see and be really careful at night when these guys come out to hunt. 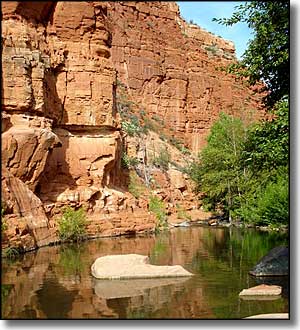 Hundreds of years ago the Salado people built many dwellings in the West Clear Creek drainage. Ruins, tools and other artifacts can be found all through the area. If you find something, enjoy it, and then put it back as you found it.

The geology exposed in the canyon reaches back some 300 million years to the Pennsylvanian Period of the Paleozoic Era. At that time Arizona was being built up of red sandstones and limey shales at the bottom of a shallow sea. 280 million years ago the Permian Period saw the landscape alternating between a terrestrial and marine environment. This is seen in the Upper Supai sandstones embedded with limestones and shales. The Supai Formation was overlaid by the eroded Hermit Shale, which, in turn, was overlaid by the Coconino Sandstone, a layer of wind-blown sand dunes. Above that is the Toroweap Formation and the Kaibab Limestone, both laid down toward the end of the Permian Period. These formations have been eroded out of most of the canyon but can still be seen along the upper reaches, just below the thick layer of cinders, ash and lava from the Quaternary Period of the Cenozoic Era. This is the volcanic material that tops the Mogollon Rim area of the Colorado Plateau.

To get there: The lower reaches of the West Clear Creek Wilderness are located about 12 miles east of Camp Verde via FRs 214 and 215 off of FR 618. The upper parts of the canyon are accessible via the Tramway and Maxwell Trails off of FRs 81 and 81E. The Tramway and Maxwell Trails are both steep but regularly maintained. The West Clear Creek Trail starts in the Bull Pen area at the end of FR 215 and heads about 6 miles up the canyon bottom before turning north up a side canyon and climbing up to Cedar Flat (at the end of FR 214). With the exception of the West Clear Creek Trail, there are no maintained trails in the canyon bottom. A journey down canyon from east to west (upper to lower) can take 6 or 7 days. In places, the canyon's steep walls rise about 1,000' above the stream. Because of the topography, rescue access is extremely difficult. You might also want to carry an air mattress or other flotation aid because there's a lot of pools, some are long, and they are liable to be quite cool to downright cold. Don't make this trip alone and make sure someone outside knows your route and schedule, just in case. 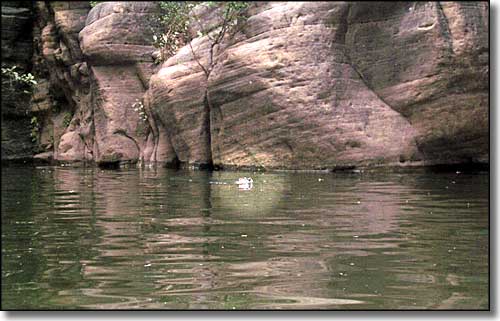 An otter in the creek 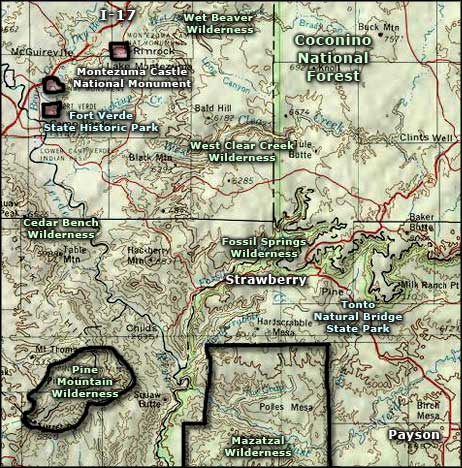