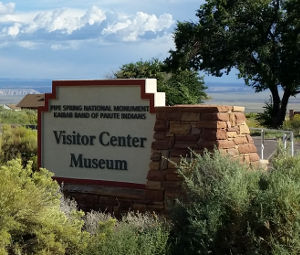 Pipe Spring National Monument is centered around Pipe Spring (of course), a perennial water source that has been in use for maybe as long as 10,000 years. Mormon explorer Jacob Hamblin, while on a mission to the Hopi people, was led to the spring in 1858. As an individual, he had an excellent reputation among the Paiutes and they were quite helpful during his expeditions. After him came a slew of Mormon ranchers, settling around the water sources on the BLM Strip and letting loose thousands of head of sheep and cattle. The problem at Pipe Spring began in 1863 when James Whitmore, a Mormon rancher, acquired the title to 160 acres around the spring and fenced it off. He built corrals and a dugout, planted a vineyard and an orchard and brought his herds of sheep and cattle. By 1864 the Navajo were raiding ranches all across the Strip, stealing stock and supplies. In 1866, Whitmore and a couple of his men went chasing after some Navajos in an effort to recover some of their stolen stock. They didn't survive the chase, and many more killings across the BLM Strip followed.

In 1868, the LDS Church (under Brigham Young) bought the property from James Whitmore's widow and Young sent Ansor P. Winsor (the LDS Bishop of Grafton, Utah) to manage the property and operate the cattle ranch as the Southern Utah Tithing Office. John Wesley Powell and his team of surveyors were working in the area in 1870-71, camping and getting their supplies at Pipe Spring. During those years Powell and Hamblin traveled around the area promoting peace and good relations between the Mormon settlers and the Indian tribes. Young and Winsor paced off the outlines of Winsor Castle in 1870, designing it so the spring was enclosed between two sandstone-block buildings in a central courtyard. The courtyard was enclosed within heavy wooden gates. Winsor Castle was soon built and the ranch prospered from 1871 to 1879. Then between the climate changing for the drier and the cattle and sheep over-grazing the land, the large tithing herd had to be moved elsewhere. From about 1877 on, Pipe Spring was also a way station along "the Honeymoon Trail," a route followed by Mormon couples on their way to be wed in the temple in St. George, UT. That was also about the same time the LDS Church established a telegraph station at Pipe Spring, the first telegraph station in Arizona Territory.

Under Winsor, the property was a way-station for folks traveling across what is now known as the Arizona BLM Strip. It was most often used to shelter polygamist wives before they were moved to properties further out in the countryside. Then the federal government passed the Edmunds-Tucker Act in 1887. Edmunds-Tucker was the third and most sweeping Congressional effort to combat the practice of polygamy: it dissolved the Corporation of the LDS Church, seizing all church-owned properties valued at $50,000 or more. The LDS Church fought that tooth and nail but by 1895 they chose to sell the ranch to private interests rather than have the ranch confiscated.

The ranch remained open to travelers and was a busy place until the federal government bought it so President Warren G. Harding could set it aside as a national monument on May 31, 1923. The Secretary of the Interior issued an order in 1933 that resolved all water conflicts around the spring by distributing the spring flow evenly among the National Park Service, the Kaibab Band of Paiute Indians and local private cattlemen.

Today, Pipe Spring National Monument is completely surrounded by the reservation of the Kaibab Band of Paiute Indians. The tribe and the National Park Service worked together and built a Visitor Center/Museum on the site where you can learn about the various peoples and cultures who have lived in this area over the millenia. There are also detailed exhibits about the Kaibab Paiute and their interactions with other cultures and tribes over the years, including the early Mormon settlers. The fort is now known as Winsor Castle and 30-minute guided tours are offered year round. The Visitor Center/Museum also offers extensive information for folks wishing to journey deeper into the Arizona BLM Strip to Grand Canyon-Parashant National Monument and the Mount Logan, Mount Trumbull and Grand Wash Cliffs Wilderness Areas.

I last visited Pipe Spring National Monument in September, 2015, traveling westward from Fredonia. Folks in the area told me it had been raining for the last two months and the area was lush, for today's BLM Strip. Tours inside Winsor Castle were happening but I opted to take the Cliff Rim Hike, a 1.1-mile loop that climbs the escarpment behind Winsor Castle and loops around the bench up there to drop back down on the other side of the castle. The ponds out front of the castle were a pleasant surprise, as were the ducks floating on them. In the area immediately around Winsor Castle there were several horse-drawn wagons (in excellent condition) on display, too.

Another view of Winsor Castle

One of the ponds in front of Winsor Castle