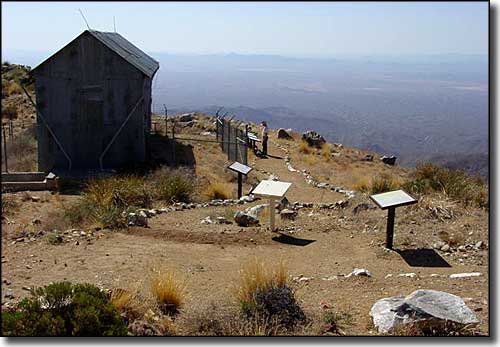 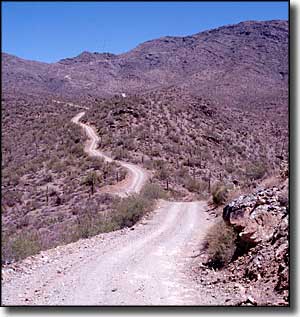 Supposedly, the 10.5-mile Harquahala Mountain Backcountry Byway is drivable by a high-clearance 4WD vehicle. For some years now that has been quite a challenge. Most folks can reach the lower part of Harquahala Mountain without much problem but beyond the kiosk in that lower parking area, the road quickly gets hard. A lot depends on how the weather has been and a lot depends on how many years ago was the last time the road saw any kind of maintenance. There's several places on this road where you're stuck between a cliff on one side and a steep drop-off on the other... and there's a severe shortage of places to turn around. Rockfall is a constant problem and this peak is high enough (5,691') to see snow in most winters. Most ATVs and dirt bikes can get to the top easy enough but I don't know about any larger vehicles.

In the 1880's, the US Army had a heliograph station at the top of Harquahala Mountain. Then the Smithsonian Institute decided to build an astrophysical solar observatory at the summit. For the most part, their staging area and mule trail headed up the hill on the north side, but this road approaches the summit from the south. The Observatory was built in 1920, then abandoned in 1925. The Smithsonian retrieved what they thought they could salvage and left the rest.

In 1975, the observatory area was placed on the National Register of Historic Places, which action allowed for some cash flow to stabilize the property and build a fence around it to protect it a bit from the vandal problem. The stabilization project also placed several interpretive panels around the site and set some decent hiking trails in place. Years later, the BLM built a parking area with an informational kiosk at the foot of the hill. The parking area also has vault toilets and several picnic tables and campfire rings.

The lower reaches of the Harquahala Mountains offer typical Sonoran desert vegetation: saguaro, ocotillo, brittlebush and other cacti. As you go up the hill you'll notice that the heavy cactus gives way to some creosotebush and mesquite as the upper mountains are too cold in the winter for most of the cactus.

This area of the Harquahala Mountains saw a lot of mining action in bygone days, gold, silver and copper action in particular. Along the road you'll see evidence of those mining activities including stone house remains, hard-rock mine shafts and various mechanical debris. And these days you might come across cattle grazing and maybe even some Desert bighorn sheep on the slopes. In the final 3/4 of a mile, the road rises 1,400 feet, so Fair Warning! But the summit is the highest point in southwestern Arizona so as long as you're okay with the breeze, you'll enjoy some of the finest 360° views in the state. There's a picnic area at the top and hiking trails that lead down to the north and along the ridgeline to the east (both directions lead straight into the designated Harquahala Mountains Wilderness Area). I highly recommend that you enjoy the summit and then get back down off the hill before it gets dark...

To get there: Take Eagle Eye Road, either north from Salome Road or south from Aguila to the dirt road beside the big BLM sign. 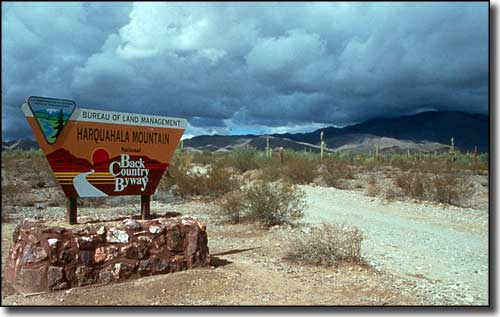 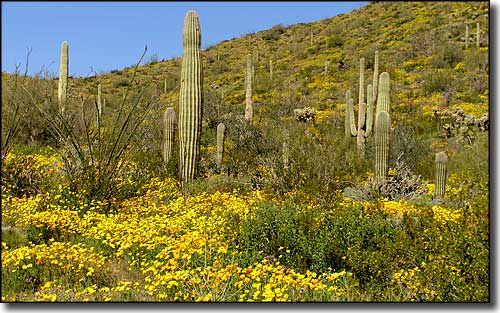 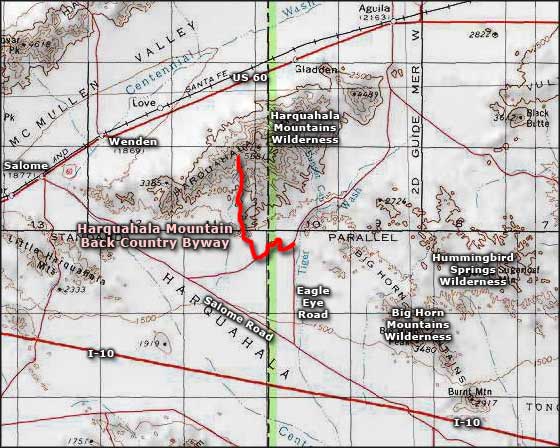