A view at the mouth of Russell Fjord 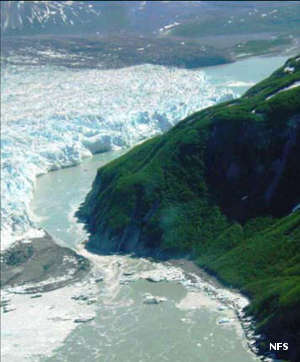 Russell Fjord Wilderness is a 348,701-acre property at the northern end of Tongass National Forest. To the northwest is Wrangell-St. Elias National Park. The wilderness begins at the upper end of Yakutat Bay.

The mouth of Russell Fjord is dominated by the Hubbard Glacier and the fjord is sometimes closed off from the sea by the glacier. When that happens, the fjord becomes a freshwater lake with all the runoff draining from the surrounding watersheds. It's happened twice in the last 40 years and is expected to permanently close the bay sometime in the near future. The Hubbard Glacier is one of the largest and most active tidewater glaciers in North America.

Russell Fjord Wilderness is located mainly between the Fairweather and Brabazon Mountains, an area of forested river valleys below alpine tundra that surrounds perpetually snow-capped peaks.The centerpieces of the wilderness are Russell Fjord and the narrow Nunatak Fjord. Both areas are heavily glaciated and both contribute greatly to the freshwater flow into Yakutat Bay.

To the north is Malaspina Glacier, the largest piedmont glacier in North America. Above the Malaspina rises Mount St. Elias, more than 18,000 feet of mountain that rises virtually from sea level. To the northeast is Mount Logan, highest point in Canada at about 19,500 feet.

The wilderness is populated with plenty of brown and black bears, grizzlies, wolves and mountain goats. Lots of smaller fur-bearing animals, too. Where the salt water goes you'll find sea lions and seals in the water and hauled out on shore. All five species of salmon spawn in the rivers that dump into Yakutat Bay and the area is well-known for the number and variety of waterfowl, seabirds and shorebirds that pass through in spring and fall.

The majority of the wilderness is extremely remote, rugged and seldom visited by humans. There is one established trail: it runs from FSR 10 west of Yakutat to a Forest Service cabin on Situk Lake, about 7 miles away. From there there is a hint of a trail leading another 1.5 miles to Mountain Lake. Wilderness camping is unrestricted and, unusual for the wilderness designation, powerboats, snowmobiles and airplanes are allowed in the wilderness area. 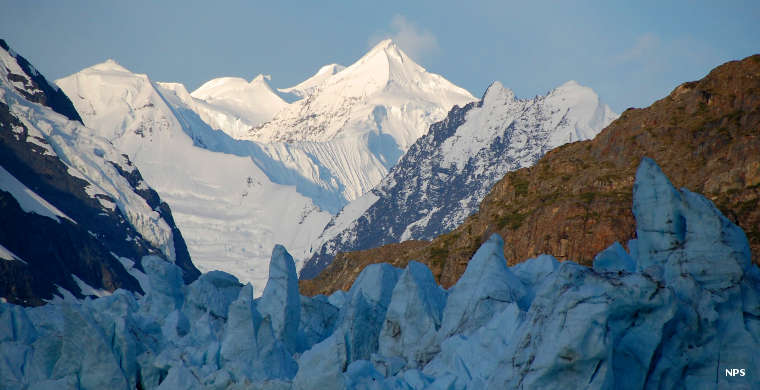 The Fairweather Range from Russell Fjord 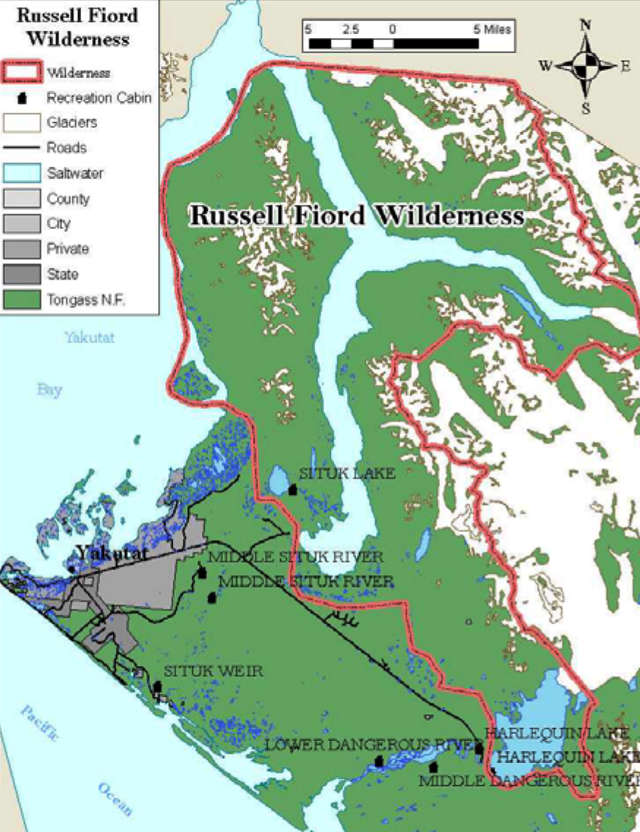