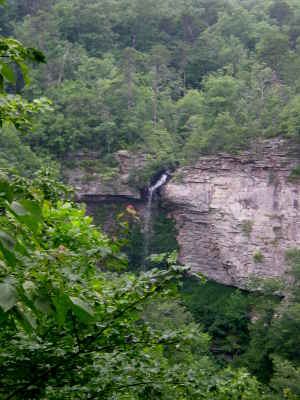 The Little River is the nation's longest mountaintop river, flowing as it does across the top of Lookout Mountain in northeastern Alabama. The 13,633-acre Little River Canyon National Preserve protects nearly all of it. This is a different place, part of the ancient Cumberland Plateau. The Little River has flowed here for eons, slowly cutting its way down into the hard mountain rock until now, there are bluffs above the water rising as much as 600'. With easy road access via the Little River Canyon Rim Parkway, that makes this a rock climber's paradise. The parkway is also known as Alabama Highway 176: a paved road with winding curves and many hills. There are overlooks (most with picnic tables) along the rim of the canyon.

Little River finds its headwaters in Georgia and flows southwest across the plateau until it empties into the Coosa River at Weiss Lake. Along the way, it passes by three significant waterfalls, Grace's High Falls (just up Bear Creek from the canyon) being Alabama's highest waterfall at 133 feet.

Reaching the bottom of the canyon can be a challenge. In the late 1960's a group of local businessmen got a permit to built a ski-lift and amusement park near Eberhard Point (upstream from the confluence of Little River and Bear Creek) but their project collapsed within a couple years. Still, they built a vehicle-access road into the canyon and hikers can still use that heavily eroded track to reach the Little River. From there, there's an unmaintained but still-defined trail running about 8 miles down the canyon to its mouth. Going upstream from there requires significant bushwhacking skills. There are also a few practiced whitewater enthusiasts who carry their canoes down the trail to the river and enjoy the ride downstream. 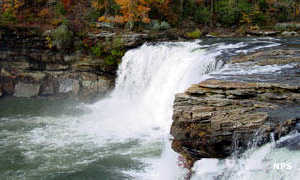 Camping is allowed only in three designated primitive sites in the back country area (north of the canyon across Highway 35): Slant Rock, Billy's Ford and Hartline Ford. DeSoto State Park (which used to count Little River Canyon National Preserve as its southernmost unit) offers several campgrounds, a lodge, restaurant and other facilities. There are informal picnic areas and some folks just come for the swimming. In addition, there are 23 miles of equestrian trails on northern part of the Preserve. Restrooms are located at the Canyon Mouth Picnic Area, Eberhart Point and Little River Falls. 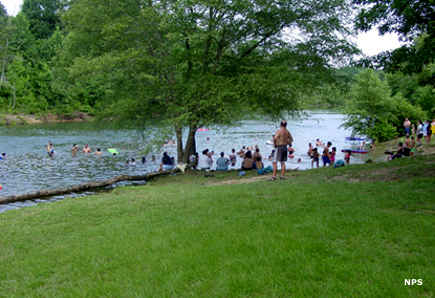 The picnic area at the mouth of Little River Canyon 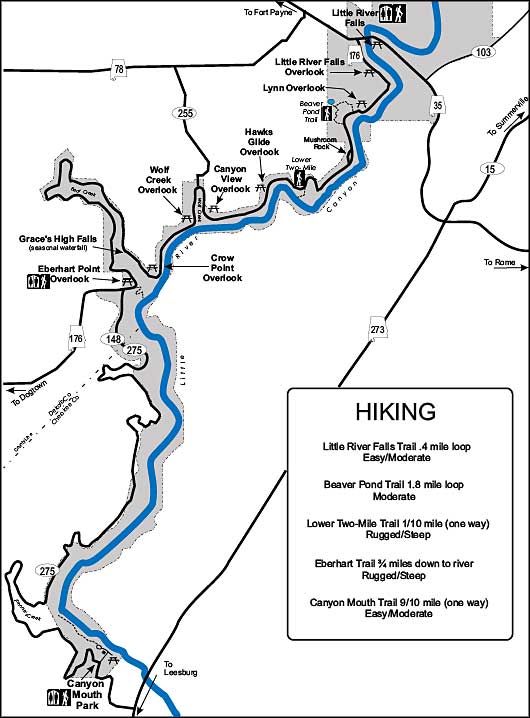 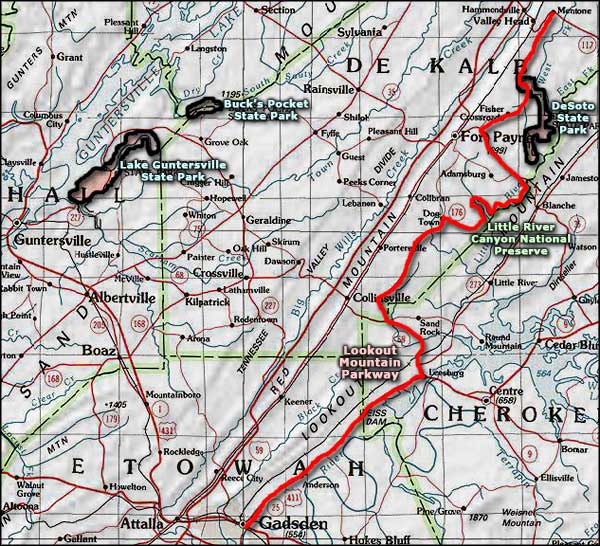