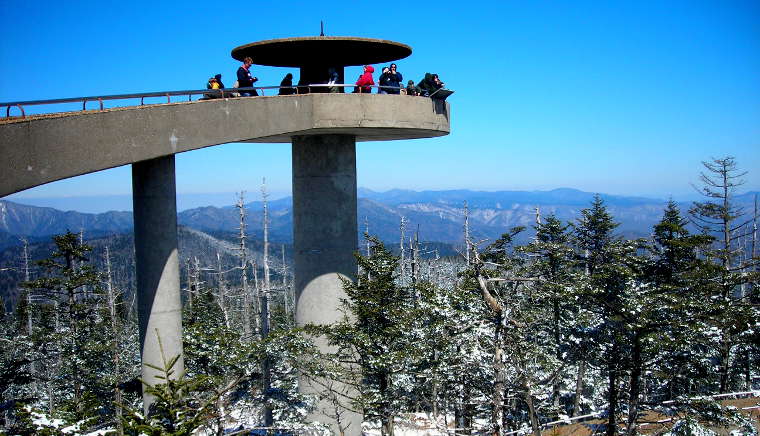 The observation tower atop Clingman's Dome 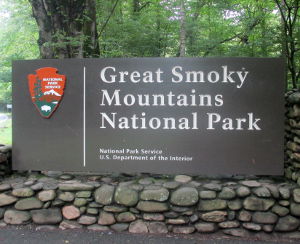 Elevations in the park range from a low of 876' at mouth of Abram's Creek to a high of 6,643 ' at the summit of Clingman's Dome. There are sixteen mountains in the park with summits higher than 6,000 feet. Precipitation in the park varies from about 55 inches per year in the valleys to 85 inches per year in the higher mountains. After parts of Alaska, Hawaii and the Pacific Northwest, this is the fourth highest average annual rainfall in the United States. About 95% of the park is forested. About 187,000 acres of the park are forested in old-growth trees that pre-date European settlement in the area. National Park Service biologists estimate there are about 10,000 species of flora and fauna living in the park.

Before European settlers began arriving in the early 1700's, this area was homeland to the Cherokee Nation. When most of the Cherokee were forced to march the Trail of Tears, a few hid out and stayed behind. Today they mostly live on the adjacent Qualla Boundary (not a "reservation" per se, but a "land trust" supervised by the Bureau of Indian Affairs).

Of the more than 850 miles of hiking trails and abandoned roadways in the park, about 70 miles are part of the Appalachian National Scenic Trail.

Unlike most national parks, there are no entry fees at Great Smoky Mountains. The region is high enough that the Newfound Gap area sees more snow days, on average, than Minneapolis, MN.

The Becky Cable House in the Cades Cove Historic District