Loess Bluffs National Wildlife Refuge is a 7,415-acre property located in northwestern Missouri, about 100 miles north of Kansas City. The area is in the southern end of the loess hills, a layer of rich soil left in place by one of the glacial retreats during the Ice Ages. The loess hills generally run north-south from south of St. Joseph, Missouri to far northern Iowa. Loess formations are found in every agriculturally rich river valley in the world. However, these particular loess hills protect some of the last remnants of Missouri's historic 15-million-acre tallgrass prairie.

Loess Bluffs NWR conains about 3,400 acres of wetlands, about 2,100 acres of grasslands, about 1,560 acres of forest and about 400 acres of croplands managed to provide food for migratory waterfowl. Spring and fall migrations can see upwards of 400,000 migrating snow geese and 100,000 other waterfowl passing through. There are more than 30 species of mammals, almost 40 species of amphibians and reptiles and more than 300 species of birds on the property. As many as 300 immature and adult bald eagles arrive in late fall and early winter.

Loess Bluffs National Wildlife Refuge is open for day-use only, from half-an-hour before sunrise to half-an-hour before sunset. There are three hiking-only trails available in the uplands area of eastern part of the refuge. There is also a 10-mile auto tour route that passes by the wetlands and grassland. The auto tour route is available for hikers, too, but is the only route available for motorized vehicles and for bicycles.

Snow geese and ducks in the air 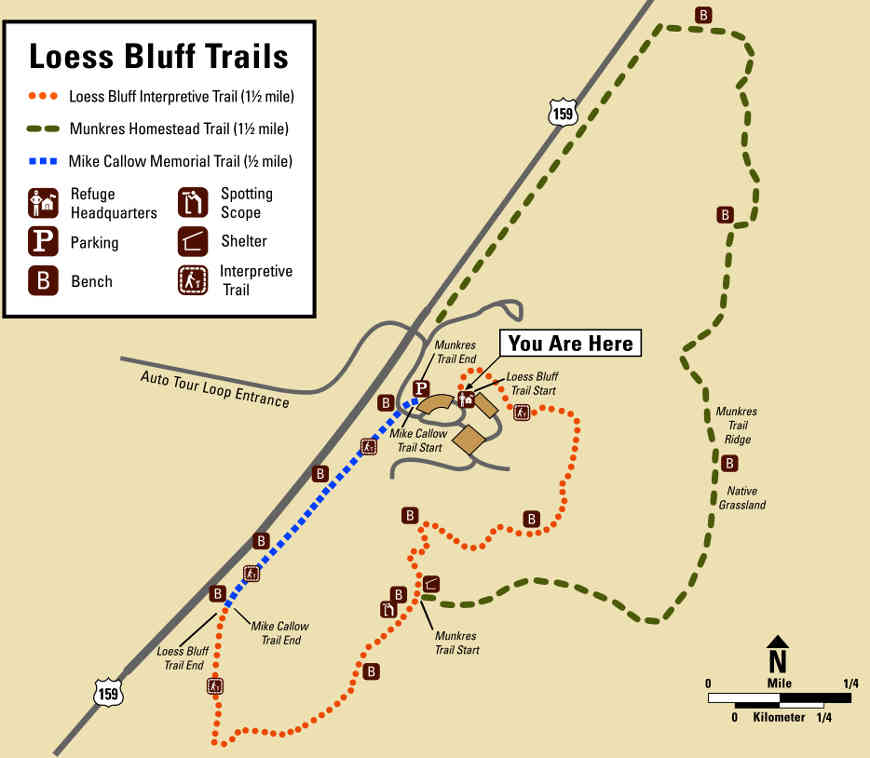