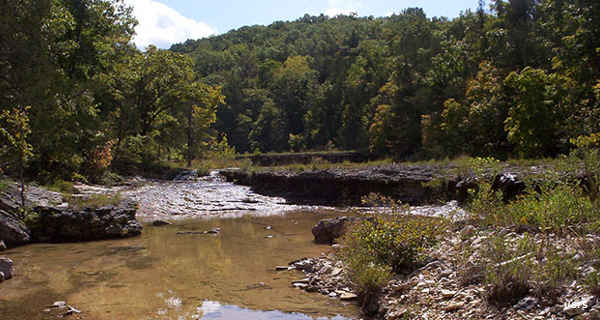 Irish Wilderness is a 16,227-acre property in the Eleven Point Ranger District of Mark Twain National Forest. The name came about because of an Irish Catholic priest in St. Louis, Father John Joseph Hogan. In the late 1850's Father Hogan came into possession of a large chunk of land in the area and began sending destitute Irish immigrant families there to begin life anew in America. His timing was horrible: within a couple years the settlement was in the No Man's Land between Union and Confederate lines and was subject to disaster from both sides and more. When the war was over, those few settlers who hadn't been killed had survived by leaving long before. Only the name remains.

After the war, the area was logged, then farmed and grazed until it could no longer support vegetation. Then it was abandoned. Once it was claimed by the government for nonpayment of back taxes, it was rolled up with a lot of other land in southern Missouri into the creation of Mark Twain National Forest. The Civilian Conservation Corps arrived in the 1930's and worked their magic in the area but left the region that is now the Irish Wilderness unroaded and free to grow wild. Today's wilderness shows their success.

The Irish is the largest wilderness area in Missouri. It's western edge is against the Eleven Point National Wild & Scenic River corridor. The White's Creek Trail runs easterly from there for about 18.6 miles to the other side of the wilderness at Camp Five Pond. Parts of the trail are level through the trees, across the glades and along the stream but there are areas where the route is simply too steep for horses. There are alternate routes but not many and not very long. White's Creek itself is a nice free-flowing stream in the spring but is generally on the dry side the rest of the year. And just because there's one major trail doesn't mean that that trail is well marked: It isn't.

The geology is Mississippian limestone, creating a rugged karst topography with exposed ridges, spires and outcroppings. There are caves on the property but most are gated to protect the endangered bats who hibernate there. There are also a few streams that disappear into the limestone and reappear as springs half-a-mile or more further down the hill.

The forest is a mix of hickory, oak, dogwood, shortleaf pine with sassafras and persimmon prevakent in the understory. There are also some river bottom hardwoods along the Eleven Point River corridor. Among the wildlife are white-tailed deer, raccoon, fox, coyote, bobcat, squirrel, copperhead, rattlesnake and eastern cottonmouth.