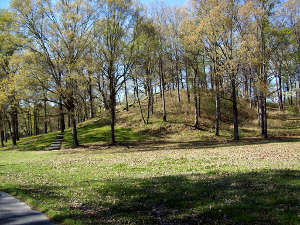 Poverty Point National Monument is actually an overlay on Poverty Point State Historic Site: the property is owned and operated by the state with some support from the National Park Service. The name "Poverty Point" comes from the surrounding plantation. The site itself is composed completely of earthworks. What's preserved is a 400-acre area in the heart of the earthworks but the total occupation area extends for about three miles along the river terrace. The primary construction is a series of six concentric, crescent ridge earthworks divided by five aisles radiating outward from the center at the river bank. Several platform mounds exist outside that largest ring and a couple small ones exist inside the smallest. Archaeologists have done extensive research at the site and feel the constructions were built up over a period of thousands of years. Lower Jackson Mound and the Ballcourt Mound were the first two mounds constructed, and they were built 4,000 (or more) years ago. Most of the other mounds were constructed between 3200 and 3800 years ago. The construction plan intentionally incorporated the older mounds into it. Prior to construction the land around the site had been leveled and a grand, flat plaza constructed.

No one knows if Poverty Point was a settlement, a trading center or ceremonial or religious center. Evidence points to the builders constructing houses on top of the earthworks while they were working, moving those houses as work progressed on the mound they were built on. Evidence has been found pointing to the construction of large circular buildings of some sort in certain areas of the plaza. There have also been ancient post holes found on top of some mounds indicating homes might have been built there. Mound A is the largest mound, built probably between 1450 and 1250 BCE over a period of less than three months. Mound D was built around 700 CE in the Late Woodland Period, about 2,000 years after Mound A was built. Mound D was built on top of one of the ring segments and the materials to construct it were taken from the surrounding surface. 19th century settlers came to the area to farm and left two pioneer gravestones on top on Mound D.

Trash mounds and middens found at Poverty Point have yielded projectile points and other stone tools fashioned from raw materials that originated in the Ohio and Tennessee River Valleys and in the Ozark and Ouachita Mountains. Soapstone for making cooking and eating vessels came from the Appalachian foothills in Georgia and Alabama. Other materials found came from places even more distant across the eastern US. All of this attests to a trade network spanning thousands of miles, the trade network of a complex and sophisticated society. What also makes this really interesting is the fact that ancient society was not agricultural in nature but hunter-gatherer. Poverty Point is the site of the largest hunter-gatherer constructions on Earth.

An element that complicates the process of dating Poverty Point is the fact the property was plowed for agricultural purposes for more than 100 years before it was protected by the state. The concentric rings of ridges are now only about three feet high whereas most of those rings when originally constructed were at least five feet high. Plowing would have had the effect of taking soil from the peaks and dropping it in the troughs. Any artifacts in that soil would have been disturbed as part of the process. John Griffin, an archaeologist with the National Park Service, first declared Poverty Point should be established as a National Monument in 1960, stating: "Poverty Point is the largest and most complex Late Archaic occupation and ceremonial site yet found in North America." Congress wouldn't get behind it back then, although Poverty Point did become a National Historic Landmark in 1962. The State of Louisiana bought a 400-acre section of the site in 1972 and opened it to the public in 1975 as the Poverty Point Commemorative Area. The state built a museum on the property to display artifacts found there, then Congress designated the site a National Monument in 1988.

Poverty Point is managed by the state and National Parks passes don't work. Poverty Point became a United Nations World Heritage Site in 2014. The state park facilities are open to the public from 9 am to 5 pm daily, except closed on Thanksgiving Day, Christmas Day and New Years Day. Poverty Point is a day-use only park. There are entry fees. 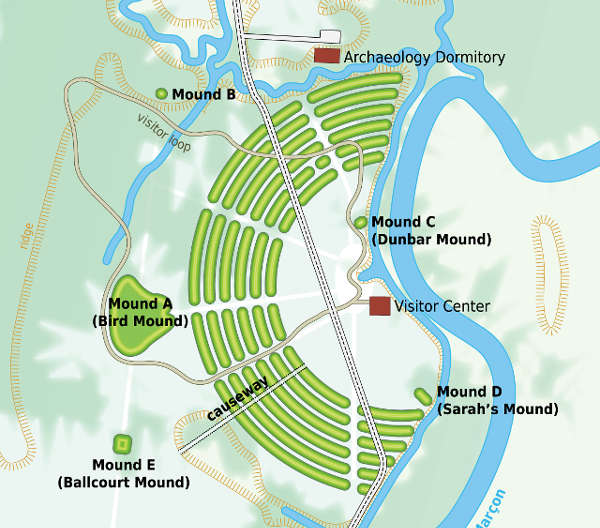