The Cane River National Heritage Area includes the city of Natchitoches and runs south and east of there for about 35 miles along Cane River Lake and Interstate 49 to Monette's Ferry. What's included in the Heritage Area: some of the finest Creole architecture and other multi-cultural sites in the area of the oldest settlements in the Louisiana Purchase area. The settlement at Natchitoches was established by the French in 1714. At that time the Red River flowed along the course of the Cane River but just upstream from the settlement was a large, natural log jam that prevented further upstream navigation. The settlement itself was established at a crossroads of Caddoan trade routes traveling east-west and north-south. The log jam was broken up in the mid-1800's (it took 40 years to complete) but when the water was free, the Red River changed its course and the Cane River came into its own.

The Cane River area is not the only Creole area in Louisiana but it is the area with the most and the most intact French, Spanish, Native American, African-American and Creole plantations, buildings, outbuildings and other structures. Natchitoches itself has a 33-block National Historic Landmark District in its downtown area with more than 100 homes and other buildings listed on the National Register of Historic Places. Also in the Heritage Area are seven National Historic Landmarks, three state historic sites and more than two dozen other properties listed on the National Register of Historic Places.

In the early days the French and Spanish competed with each other in the region, each building forts and trading posts close to each other in order to protect their interests. It wasn't long before the French settlement around Fort St. Jean Baptiste grew to become Natchitoches, the most prosperous town in the region. By the time the United States bought the Louisiana Purchase, the Cane River area was a thriving agricultural outpost producing indigo and tobacco. Cotton came along later and as the farming and production of cotton became more mechanized, cotton plantations grew and changed the face of the region. The aftermath of the Civil War changed the area again as the economy shifted from labor-intensive slavery to labor-intensive tenant farmers and sharecroppers. After World War II the farming of cotton became much more mechanized and the laborers freed from tending the cotton made an exodus to the cities.

Most of the plantation homes in the Cane River area pre-date the Greek-revival plantation homes seen in much of the South. They were mostly built before the 1850's cotton boom that financed many of the other plantations across the South. Instead, the homes are built in the Creole style, one of only six uniquely American architectural styles developed in colonial America. There are three basic types of structure in Creole architecture: single-story Creole cottages, townhouses like those found in the historical district in Natchitoches and Creole plantation homes found along the river. Most buildings were constructed of upright and angular wooden beams and posts and the gaps filled with mud, Spanish moss, deer hair or mule hair. The method of construction is said to have been imported from France or Canada or the West Indies, even though nearly identical construction techniques are found among West African and native American societies. 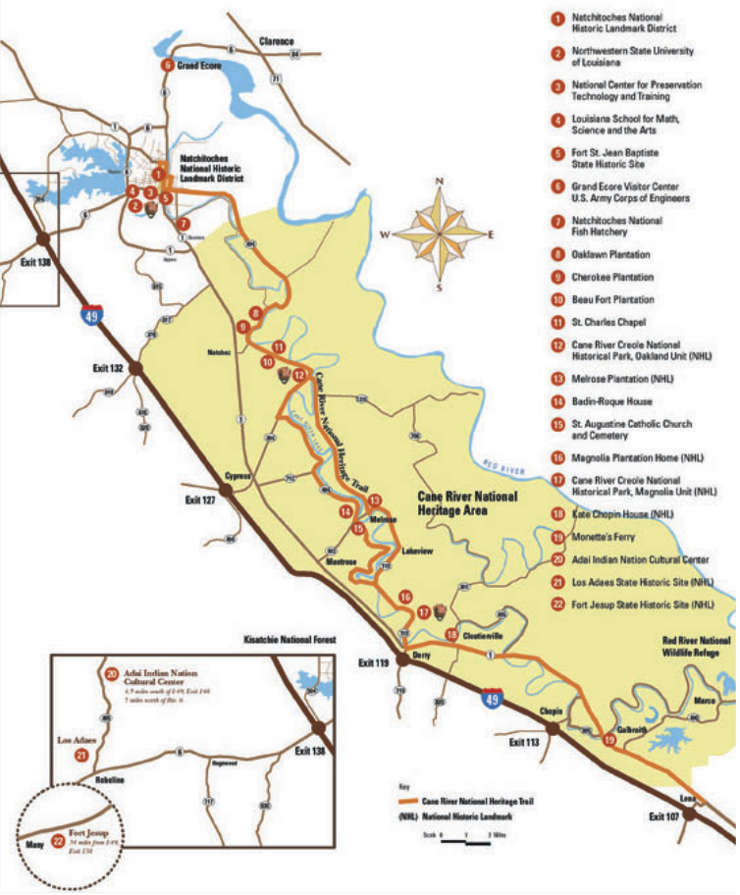