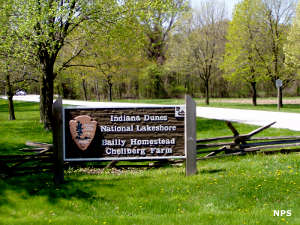 The movement to create the Indiana Dunes National Lakeshore began in 1899 but didn't reach fruition until 1966 when Congress finally authorized creation of the park. Public sentiment to create the park rose and fell over the years as the First World War, then the Great Depression, then the Second World War intervened and forced governmental focus on other things. There was also a lot of push-back from industries that were using the raw materials of the dunes in their manufacturing processes (as an example: the largest dune in the area was carted off in railroad boxcars to make glass). There was also a major effort in those days to built a "Port of Indiana" in the East Chicago-Gary area. Indiana Dunes State Park, established in 1926, was the first real toehold established by folks intent on preserving the Indiana dunes for future generations. The first glimmer of hope for establishing a National Park in the area came with the Kennedy Compromise in 1963. Kennedy was intent on establishing the Cape Cod National Seashore and using federal funds to acquire the land. That effort branched out to Indiana Dunes and shortly, that possibility became a reality. That first bill authorized a National Lakeshore that included only 8,330 acres of land but other bills in 1976, 1980, 1986 and 1992 authorized expansions of the park to its present size of more than 15,000 acres.

Several parcels of the National Lakeshore are set back from the beach, acquired because they have some intrinsic natural value the Park Service wants to preserve and protect. One of these is the Heron Rookery, once the site of many large heron nests but not any more. Others have been preserved because of their historical and/or cultural significance. One of those is the former Good Fellow Youth Camp, run by US Steel for employees' children from 1941 to 1977 when it was purchased by the NPS. Located near the geographical center of the National Lakeshore is the Bailly-Chellberg Farmstead, site of the historic Bailly Trading Post, Bailly Cemetery and the Chellberg Farm (still operating as a heritage farm under the auspices of the National Park Service).

Indiana Dunes National Lakeshore is located near the southern edge of the Michigan lobe of the Wisconsin glaciation (about 110,000 to 10,000 years ago). The glaciers in this area advanced and retreated several times before that final retreat about 10,000 years ago. That glacial action left several terminal moraines in the area, adding to the diversity of the landscape. There are geological remnants of at least four successive stages of historic Lake Michigan shorelines. This is also an area where you'll find Arctic and boreal plants living side-by-side with desert plants (especially prickly pear cactus). In addition to the more than 1400 species of plants on the property, sightings of more than 350 species of birds have been documented over the years.

There are more than 15 miles of sandy beach shoreline in the Lakeshore. The park also offers more than 45 miles of hiking trails, some accessible. Some of the dunes in the area reach a height of about 200 feet and between the dunes are extensive wetlands, important feeding and resting areas for the hordes of migratory birds that pass through in spring and fall.

The Indiana Dunes National Lakeshore Visitor Center is located in Porter, Indiana at 1215 N. Indiana Highway 49. The visitor center is open daily year round except closed Thanksgiving, Christmas and New Year's Days. Summer hours: 8 am to 6 pm, Memorial Day to Labor Day. Winter hours: 8:30 am to 4:30 pm. The West Beach Bathhouse is open from Memorial Day to Labor Day, 9 am to 30 minutes past sunset. The West Beach area is open year round, sunrise to 30 minutes past sunset. Park headquarters is open Monday through Friday (except Federal holidays) from 8 am to 4:30 pm. The Portage Lakefront and Riverwalk is open daily from sunrise to 30 minutes past sunset, year round.

Dunewood Campground offers 78 camping sites, 3 of which are accessible. The campground is open from the last Friday in April to the third Sunday in October. There are grills, picnic tables, restrooms and showers but no electrical hookups. Sites are available first-come, first served and the campground usually fills up by late Friday afternoon. 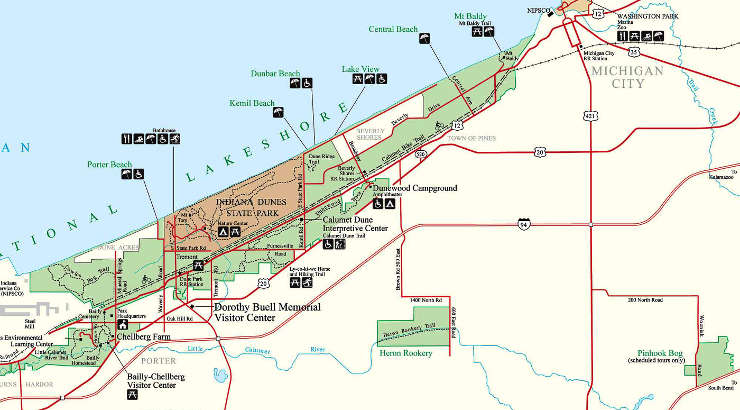 Eastern part of Indiana Dunes National Lakeshore: Click on the map to get a larger version 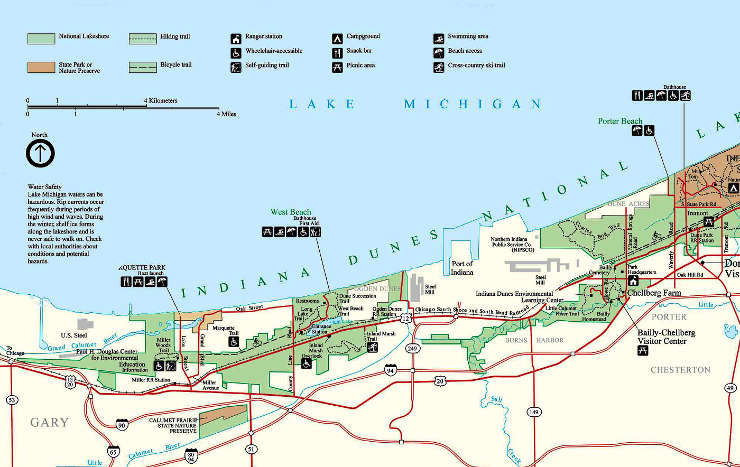