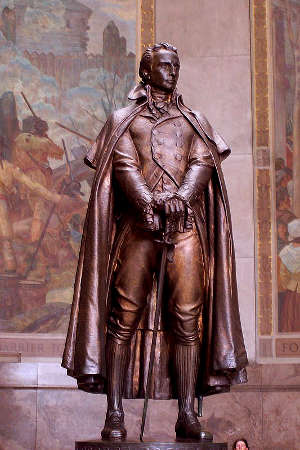 On February 25, 1779, the 170 men serving under Lieutenant Colonel George Rogers Clark took Fort Sackville in what is now Vincennes. By 10 am that morning, the British forces had marched out of the fort and surrendered to the Americans. Among those who surrendered was the British commander, Lieutenant Governor (of the Northwest Territories) Henry Hamilton. The confrontation had started a couple days before but at no time were the British or American troops shooting at each other. Clark and his men were able to convince the British that they didn't have a chance and if they didn't quickly virtually unconditionally surrender, their fates could be horrible. In taking Fort Sackville and holding it for the remainder of the Revolutionary War, Clark solidified the American claim to the Northwest Territories and the British Crown ceded those properties in the 1783 treaty that ended that war. Those Territories were almost as large a land area as the original thirteen colonies.

The Classical Memorial built here to honor Clark was authorized under President Calvin Coolidge and finally dedicated by President Franklin D. Roosevelt in 1936. At that time, the property was an Indiana State Park. Indiana transferred the site to the National Park Service in 1966. Johns Angel's statue of Francis Vigo (an Italian-American who assisted George Rogers Clark) and Albin Polasek's copper statue of Father Pierre Gibault were added to the park in 1934. The Lincoln Memorial Bridge was built about the same time and was designed to complement the Memorial, right down to the full-length reliefs of Native American chiefs that adorn the pillars marking the Indiana side of the bridge. No one knows the exact location of Fort Sackville these days but best estimates put it between the George Rogers Clark Memorial and Lincoln Memorial Bridge. George's younger brother was William Clark, of Lewis & Clark fame.