Minidoka National Historic Site commemorates the Minidoka War Relocation Center, a camp that operated from 1942 to 1945 specifically for the purpose of interning Japanese-American citizens during World War II. More than 13,000 detainees from Oregon, Washington and Alaska passed through Minidoka, but the population never exceeded 9,500 at any one time. The site was listed on the National Register of Historic Places in 1979 and became an official unit of the National Park Service in 2001. However, there are no visitor facilities or services available on the site. There is information available at an exhibit in the Visitor Center at Hagerman Fossil Beds National Monument. At the Minidoka site, there are only the remains of the entry guard station and its waiting room. There is also a rock garden inside the area that was once fenced. There is a Relocation Center Display at the nearby Jerome County Museum and one of the original barracks buildings has been moved to the Idaho Farm and Ranch Museum southeast of Jerome and restored to its original "splendor." There is also a small marker next to the remains of the guard station and an interpretive sign at the nearby intersection of Hunt Road and Highway 25.

Minidoka National Historic Site is open year-round during daylight hours only. Entry is free. Many of the buildings and features that were part of the center in the 1940's are now on private property. The boundaries are not well marked and you might want to be careful of trespassing.

To get there: exit Interstate 84 at US Highway 93 and go north 5 miles to Idaho Highway 25. Turn and go east about 9.5 miles to Hunt Road. Go east on Hunt Road about 2.2 miles to a small parking area on the right. 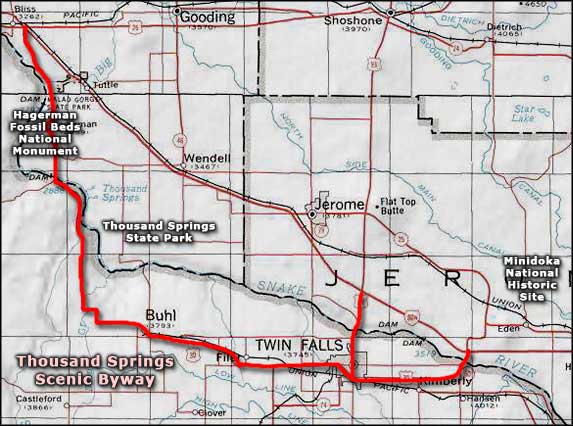