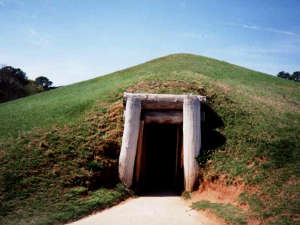 Ocmulgee National Monument is a 701-acre property that preserves and protects constructions left behind by Native Americans from more than 1,000 years ago. Some of the artifacts found on the property point to human use of the area as much as 17,000 years ago. The principal elements still available to see are several ceremonial mounds, a burial mound and some defensive trenches. The constructions indicate a civilization that possessed detailed knowledge of the soil, the ability to organize and direct many laborers and the application of highly skilled engineering techniques.

The City of Macon evolved from a settlement that began just outside the walls of Fort Benjamin Hawkin, built by the US Government in 1806. Today, the city wraps nearly the entire national monument, only the Lamar Mounds and Village Site are outside the city (about three miles downstream on the Ocmulgee River).

The park offers about 5.5 miles of hiking trails, some leading to the top of a couple of the ceremonial mounds. In the visitor center museum are displays of artifacts dated back to the last Ice Age. Near the visitor center is the Earth Lodge, a reconstruction of a ceremonial earth lodge excavated on the property by archaeologists and dated to be about 1,000 years old. Most of the mounds appear to be products of the Southeastern Ceremonial Complex, part of the general Mississippian Culture that built mounds all across eastern North America. Right around the Earth Lodge there were several flat-topped mounds, a burial mound and a collection of homes. Artifacts found there have been dated from 900 to 1100 CE, the height of the Mississippian influence in the area. About 200 years after the decline of the Mississippians, the Lamar Culture came into full bloom. Combining elements of the Mississippian culture with elements of the older Woodland Mound Builder culture the Lamar built a settlement on top of the ruins of the former Mississippian town. Three miles downstream on the Ocmulgee River, they also built the settlement we know as "Lamar." The village at Lamar contained two temple mounds and was surrounded by a stockade. When Hernando de Soto came through in 1540, it was the Lamar people he encountered. As with every other tribe de Soto and his men encountered, disaster in the form of devastating disease followed.

By the time the British arrived, the area was inhabited by the Muskogee Creek. Colonists from South Carolina built a trading post on (what is now) Ocmulgee National Monument in 1690. As trade grew, the Creek village next door grew. Then came a war with the colonists in 1715 and in being defeated, the Muskogee Creek started to be pushed out of the area. When naturalist William Bartram visited Ocmulgee in the 1770's, he wrote of "the wonderful remains of the power and grandeur of the ancients in this part of America." By 1825, the State of Georgia was using local militia to round up members of the tribe and transport them to Indian Territory over the Trail of Tears.

Ocmulgee National Monument is open from 9 am to 5 pm every day of the year except Christmas and New Year's Days. Except for special events, there are no fees involved in visiting Ocmulgee National Monument. Containing the only spiral mound in America, rangers lead scheduled tours of the Lamar Unit when the water level of the Ocmulgee River is low enough. Call ahead to know the schedule and reserve your place. 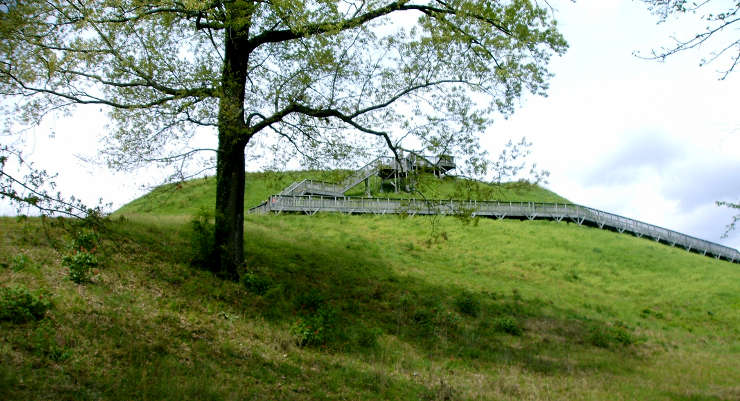 Another view of the large ceremonial mound at Ocmulgee National Monument 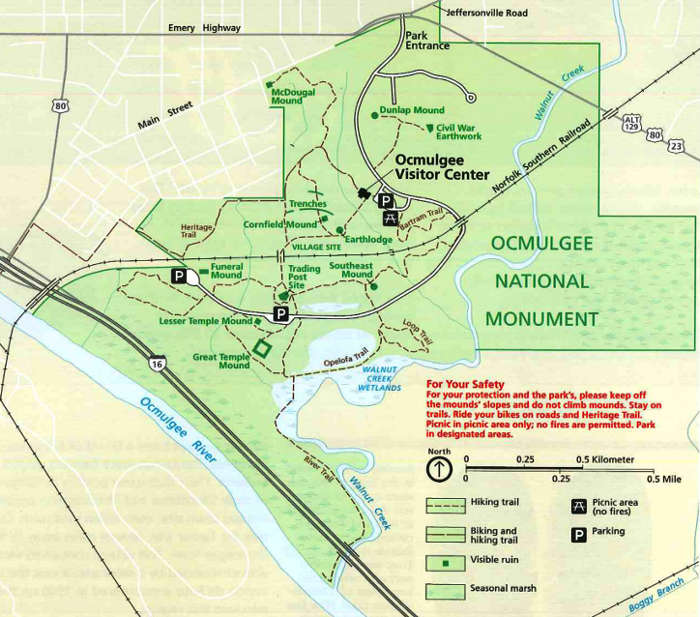