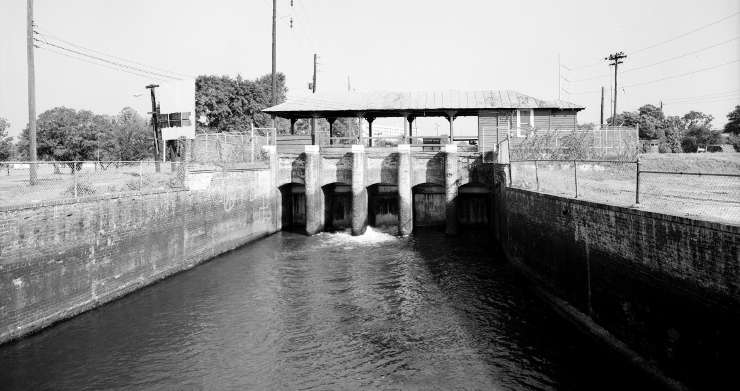 A historic lock on the Augusta Canal 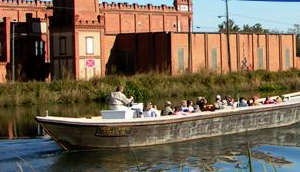 A tour boat on the Augusta Canal

Augusta Canal was begun in 1845 and opened for business in 1847. It was a seven-mile-long industrial canal with several objectives: to provide drinking water for the city, to harness the power of the Savannah river for mills and factories and to provide an easy route for the transportation of goods in the area. By the time the Civil War began, Augusta was one of the few Southern cities with any kind of manufacturing base. That led Confederate Colonel George Rains to build the Confederate Powderworks in Augusta.

Twenty-eight buildings stretching out for two miles along the Augusta Canal made up the Powderworks, and these were the only buildings actually constructed by the government of the Confederate States of America. However, that was enough to establish Augusta as a major materiel production and supply center in the South and caused other manufacturers to build more factories nearby. Despite being a primary center of manufacturing, Augusta was not a target in Sherman's march to the Sea and ended the war in significantly better shape than most other Southern cities. The manufacturing boom picked up after the war and the canal was widened in 1875.

In the 1890's, Augusta replaced its aging water pumping structure on the canal with a new one that is still in use by the city today. Then the city turned to developing hydroelectric facilities and by 1892, there were electric streetcars running on streets lit by electric lights, the first Southern city to have both amenities. 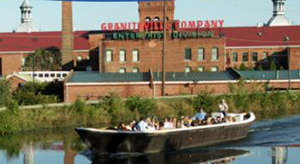 The Savannah River had flooding problems in the 1920's and 1930's that caused the Federal Works Progress Administration to send workers into the area to straighten the canal, build a new spillway and make other repairs and improvements. By mid-century, the factories started closing and the canal area came into neglect. City officials began thinking about draining the canal and building a new highway on top of it in the 1960's. It didn't happen, then a state park was proposed for the area in the 1970's and that didn't happen either. In 1989 the state created the Augusta Canal Authority and that body still has jurisdiction over the canal area.

The Historic Augusta Canal and Industrial District was placed on the National Register of Historic Places in 1977 and became a designated National Heritage Area in 1998. Today the canal is the centerpiece of the city with a seven-mile-long recreational trail along the towpath of the canal. Some of the factories have been converted to loft apartments and upscale offices. The Interpretive Center for the Augusta Canal is in the converted Enterprise Mill and other renovation/refurb projects are in the works. The Intrerpretive Center offers a museum detailing the history of the canal, the mills, the lives of the workers, the development of hydro power and the decline of manufacturing in the area. Boat tours of the canal can be booked at the Interpretive Center.

The Augusta Canal Discovery Center is generally open Mondays through Saturdays from 9:30 am to 5 pm, and from 1 pm to 5 pm on Sundays. Heritage Boat tours leave the Center Mondays through saturdays at 10 and 11:30 am and again at 3 pm. There is a boat tour on Sundays at 3 pm. The "Civil War Canal Tour" departs daily at 1:30 pm.