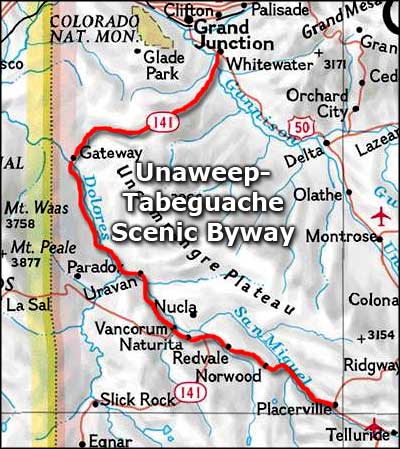 Unaweep Canyon cuts through the red sandstone of the Uncompahgre Plateau all the way to Precambrian geology. Hundreds of millions of years of the geologic record is exposed, including fossils of dinosaurs and early amphibians. In spite of the abandoned and closed uranium and copper mines in the area, what is really offered is sheer scenic wonder: thousand foot high striated cliffs, raging streams and unbounded skies.

So far, I've only been able to drive this Scenic Byway from Naturita to Placerville. In getting to Naturita and driving this route, I hadn't realized how big western Colorado's canyon country is. Just the short section I drove: from Naturita up out of the canyon to Norwood and then down into the canyon again to Placerville was enough to whet my appetite for more.

My too short story: While the townsite of Naturita is pretty lush, heading southeast out of town and up Naturita Canyon on the Unaweep-Tabeguache Scenic Byway is going into dry country. Once you reach the end of the canyon and head out over the flat park area where Norwood is, the countryside gets pretty green again. This is another big farming and cattle and horse ranch area, limited by the walls of the river canyons that interlace the area. Lots of big views.

European history in this area didn't legally begin until 1881 when the US Government forced the Weminuche Utes back onto the Ute Mountain Ute Reservation. However, part of the problems that forced the reduction in lands previously granted to the Utes took place in this area. There was a large wave of mineral prospectors who came through with no respect for the Ute boundaries. Then came a wave of farmers and ranchers who saw a lot of gorgeous countryside perfect for fulfilling their dreams on, but it was part of the Ute Reservation. While it was usually the European invaders who started the shooting, in the end the Utes were pushed back onto the least desirable lands of their original homelands and the better-armed invaders grabbed the rest, modifying the law in their favor as they did so.

Most of the roads we use today in that area of Colorado west of the plains follow old freight wagon routes established in the gold mining days. Those routes followed the original prospectors trails, which followed old Ute hunting and traveling trails. The road I followed from Naturita to Placerville is one of those old Ute routes. The prospectors and freighters built it up in their journeys between Telluride and early gold strikes down the San Miguel River Valley to the northwest. During World War II the road was built up even more as the US Government pushed for more radium, vanadium and uranium mining between Uravan and Vancorum (northwest of Naturita). The uranium market collapsed in the 1950's and the feds shut down the last uranium ore milling facility in 1983. This has been primarily a tourist road since then.

Heading east out of Norwood on the Unaweep-Tabeguache Scenic Byway is to drive across the center of the flat mesa. Then all of a sudden, you come to the drop into the San Miguel River Valley. It''s a long way down, and steep, too. As I was out here early in the morning, it got dark at the bottom of the canyon.

The next 13 miles are along the bottom of the canyon, beside the San Miguel River with high-rising red sandstone walls on two sides. There's lots of fishing places through here but the camping, I don't know. In the canyon this is all BLM land and most of the side roads I turned in to were barricaded. There were a couple of developed campgrounds, though, and they seemed to be busy still (late September). Now and then I'd be able to get down to the river and it looked like the fishing in here should be excellent.

The Unaweep-Tabeguache Scenic Byway ends at the intersection with the San Juan Skyway at Placerville. 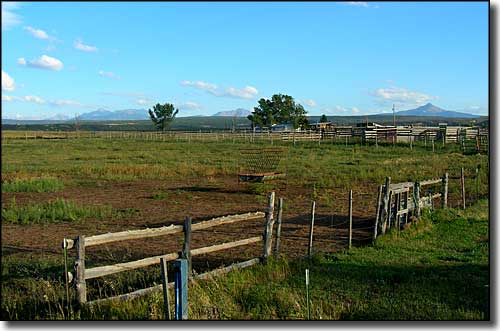 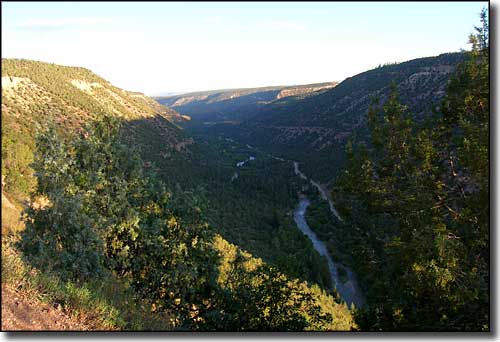 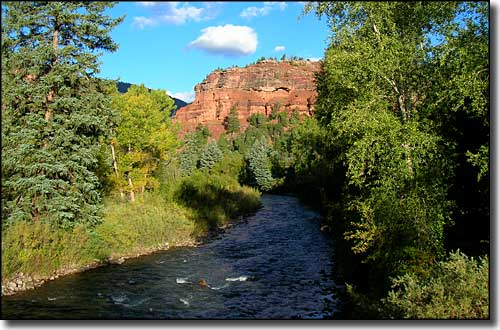