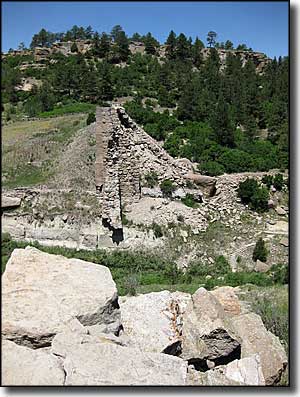 On August 3, 1933, the Castlewood Dam on Cherry Creek burst, sending a 15-foot wall of water flooding down through the canyon and into the streets of Denver. You can still see remnants of the ill-fated dam and the historic homestead if you go for a hike in Castlewood Canyon State Park. There are several hiking trails through this section of the ecologically unique Black Forest ranging from an easy 1/2 mile up to a moderate 4 miles. These trails wind along through the canyon beside Cherry Creek and up onto the rim past some great views of Pikes Peak and the Front Range, and past the natural Pikes Peak Amphitheatre and the Bridge Canyon Overlook gazebo. Along the way there is also access to some great technical rock climbing.

Castlewood Canyon State Park encompasses 2,303 acres with elevations ranging from about 6,200' to about 6,600', and offers picnic areas near both entrances, but this state park is for day use only: the gates are locked promptly at sunset.