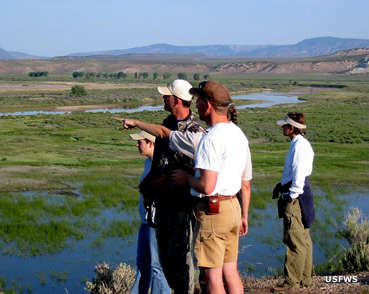 At the heart of the 13,455 acres of Browns Park National Wildlife Refuge is the Green River. Construction of the Flaming Gorge Dam upstream forced the federal government to provide suitable acreage for the fish, wildlife and migratory birds displaced by the Flaming Gorge Project and Browns Park is one of those places. Hundreds of species are dependent on this property for their survival in this area, among them the threatened Ute's ladies tresses orchid, loggerhead shrike, bald eagle and the endangered Colorado pikeminnow.

Originally, Browns Park National Wildlife Refuge was managed with a priority on waterfowl but that has changed over the years. Today, management focuses on preserving and enhancing a range of habitats varying from riparian to wetland to grassland to upland. In wandering around on the property you might come across moose, elk, mule deer, river otter, beaver, osprey, songbirds, waterfowl, black-tailed jackrabbits, coyote, bobcat, gopher snake and Woodhouse's toad. In all there are 68 species of mammals, 15 species of reptiles and amphibians and at least 223 species of birds have been recorded on the property.

Most of Browns Park NWR is maintained as wilderness and general wilderness rules are in effect. However, there is an 8-mile auto tour route that is generally passable by most passenger vehicles (as long as the road is dry). There are other dirt roads that are usable only by 4WD with high clearance but there's no guarantees. Most roads are marked as to whether they are open or not and sometimes seasonal closures just shut the roads down. There are a number of hiking trails on the refuge and visitors can also enjoy the two campgrounds (stay limit: 14 days) and the fishing pier and hunting blind near Hog Lake.

The refuge is open from sunrise to sunset every day of the year. After sunset, public activities are limited to the Crook and Swinging Bridge Campgrounds only. The headquarters office and visitor center are open Monday through Friday from 7:30 am to 4 pm, except for Federal holidays. Together with Ouray National Wildlife Refuge and the Colorado River Wildlife Management Area, Browns Park is managed as part of the Lower Green River Refuge Complex.

To get there: the nearest town with any kind of supplies is 92 miles away. It's recommended that you come to Browns Park with extra clothes, food and water. Maybe even an extra spare tire. State Road 318 from Maybell on the Colorado side is paved all the way (about 56 miles). Coming south from Rock Springs, the road is paved to the Colorado line, then it's dirt (County Road 10) for 22 miles. When you reach Colorado 318, go west about 20 miles and follow the signs. If you're coming in from Utah I don't know if you are brave or foolhardy: that's a dirt BLM road that doesn't see pavement over the last 25 miles or so. (When I last visited Browns Park, I went in from Maybell and out through Utah: wild BLM road, well-marked but challenging in spots. And beautiful but dry countryside.) And I don't care who your cell phone provider is, the thing most likely became a brick long before you got to Browns Park... 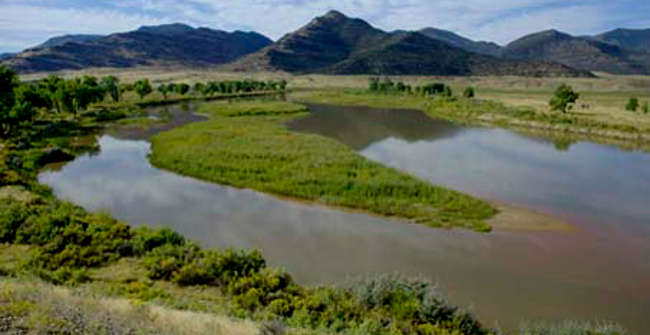 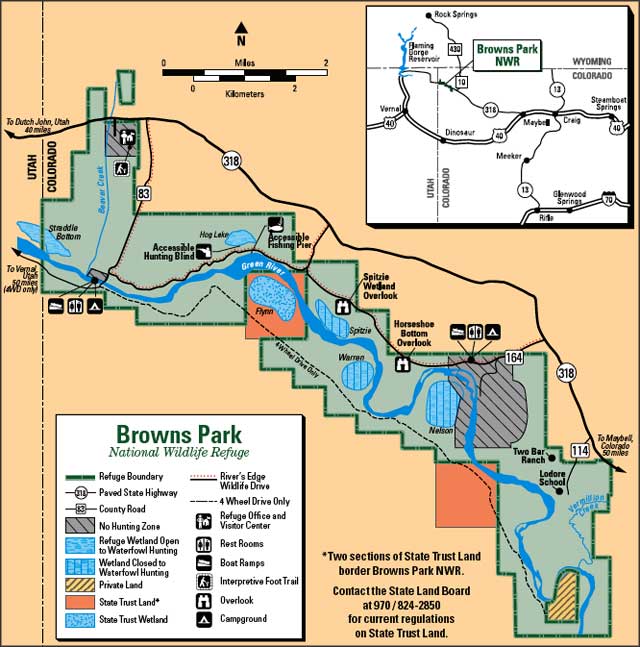