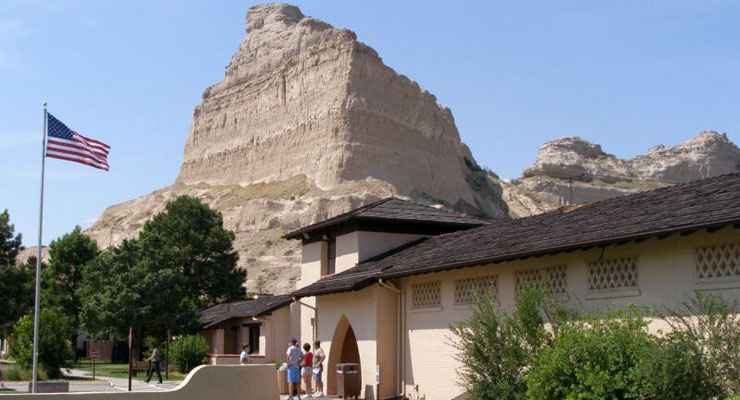 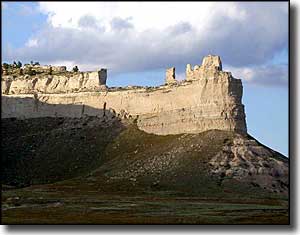 Scotts Bluff National Monument contains Scotts Bluff, a prominent landmark on the south side of the North Platte River. The bluff was notable as a major landmark for folks traveling the Emigrant Trail (another name for the trunk route that was comprised of the Oregon Trail, the California Trail, the Mormon Pioneer Trail and the Pony Express Trail). This route has been incorporated into the Western Trails Scenic and Historic Byway.

The first group of non-natives to discover the bluffs were returning to the East from a trip to establish Fort Astoria on the Columbia River in Oregon. They were led by Robert Stuart and had made their discovery of South Pass only a couple weeks before (essentially, their return route from Oregon would become the main route of the Oregon Trail 28 years later). However, the War of 1812 intervened and the route wasn't rediscovered until 1823.

Scotts Bluff, the most prominent of the five rock formations that make up the whole, was named for Hiram Scott, a fur trader who died near here in 1828. During the 1830's, many fur trappers, missionaries and military expeditions passed through this area of Nebraska. The first crossing of the Oregon Trail happened in 1841 and for 28 years, thousands of emigrants passed by this portal to the American West. The trail itself passed between two large cliffs in a cut named Mitchell Pass. In the early 1850's, the US Army Corps of Engineers arrived and built a smoother road up to and through Mitchell Pass. The trail saw plenty of wagons, livestock and emigrants until the transcontinental railroad was completed in 1869.

The town of Gering was founded in 1887, at the base of the bluff. Scottsbluff, the town, was founded across the Platte River in 1900. Scotts Bluff National Monument was established in 1919, incorporating the main Scotts Bluff and several other nearby bluffs into the 3,000-acre property. The Visitor Center and Oregon Trail Museum were built at the base of the bluffs in the 1930's by the Civilian Conservation Corps. The CCC also drilled three tunnels and built a road through them leading to the summit of Scotts Bluff.

Scotts Bluff National Monument is open every day of the year except Thanksgiving, Christmas and New Year's Day. From Memorial Day weekend through the third week in August, the Visitor Center and Oregon Trail Museum are open from 8 am to 7 pm. In the off-season, the hours are 8 am to 5 pm. The Summit Road in summer is open from 8 am to 6:30 pm, in the off-season from 8 am to 4:30 pm. The hiking trails are open every day from sunrise to sunset. Admission fees: $3 each for hikers, bicyclists and motorcyclists, $5 for vehicles, $40 for commercial vans, $100 for commercial buses. Everything except the commercial tickets are valid for seven days from date of purchase. 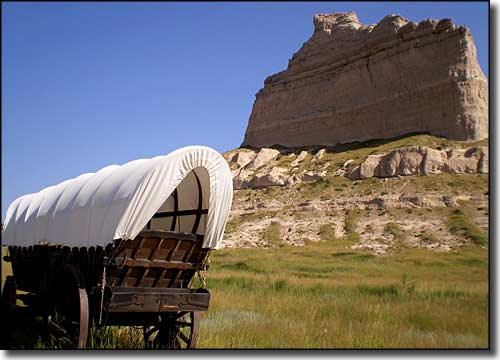 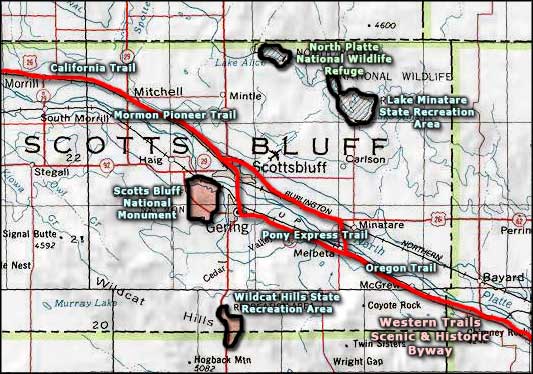