An easy stretch of the Niobrara River 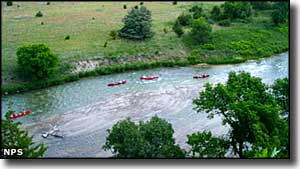 76 miles in two separate stretches along the Niobrara River were set aside with a National Scenic River designation in 1991. Part of the declaration goes into several "outstandingly remarkable values" that were to be preserved and protected with the river itself. These were: Scenery, Fish and Wildlife, High Water Quality, Fossil Resources and Recreation. Backpacker magazine designated the Niobrara as one of America's 10 best canoeing rivers.

Along the route are numerous waterfalls, dropping into the river from surrounding cliffs and branch canyon walls. Smith Falls drops 63 feet into a side canyon (making it the highest waterfall in Nebraska), then runs for several yards to the river. The river itself offers several short sections of Class I and II rapids, although several places further downstream require a portage around the rapids. The 26-mile run from Fort Niobrara National Wildlife Refuge to Rocky Ford offers truly excellent opportunities for kayaking, canoeing, tubing and fishing. And as you float through, you might want to keep your eyes scanning the sandstone cliffs for fossils...

The best access to this 26-mile stretch of the river is on Nebraska Highway 12, northeast of Valentine (follow the signs to the Fort Niobrara National Wildlife Refuge put-in). There is other public access at Smith Falls State Park and at the Middle Niobrara Natural Resource District's Brewer Bridge landing. The rest of the National Scenic River area can be paddled but there are private property access problems.

One thing to look out for: about 400 bison make their home on the lands of the Fort Niobrara National Wildlife Refuge which the river passes through for several miles. You might also see beaver, mink, mule deer and coyote coming to drink from the cool, clear water. Fishermen do well fishing for brown trout, rainbow trout and channel catfish. There are also more than 250 species of birds who visit this river regularly.

On its 535-mile journey from eastern Wyoming to its confluence with the Missouri River, the Niobrara River cuts through the Ash Hollow, Valentine, Rosebud and Pierre geological formations. These particular formations include the fossils of very early mammalian species, precursors to today's horse, beaver, rhinoceros and mastodon, and other fossils of the ancient ancestors of today's turtles, fish and alligators. Most of the waterfalls that occur along the river's route are where water flows over the edge of the erosion resistant Rosebud formation. There are more than 90 waterfalls along the western-most part of the Niobrara, some dropping directly into the river, others dropping into tributaries in side canyons. The surface in this part of Nebraska is sandhills: one of the largest areas of grass-stabilized sand dunes in the world.

Most people visit the Niobrara National Scenic River between mid-May and mid-October. Primary season for floating the river is June, July and August. On a normal sunny weekend, you might see between one and two thousand people on the river...

The rapids below the Rocky Ford portage 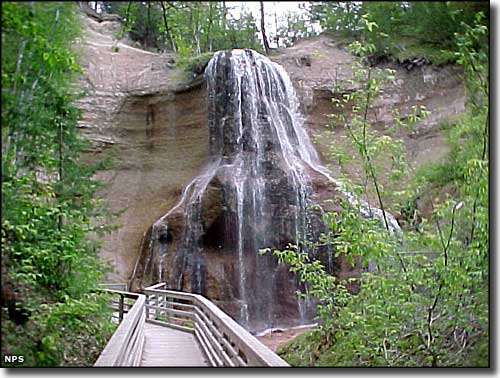