The Red Rocks of Sedona are in Coconino National Forest 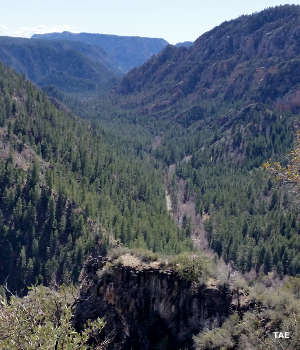 The Peaks District is that area mostly north of Flagstaff: the Volcanic Highlands-Kachina Peaks area. The San Francisco Volcanic Field and the highest point in Arizona are here.

The Mormon Lake District spans from the southern reaches of the Peaks District south to where Upper and Lower Mary Lakes meet, still on the Mogollon Plateau and north of the Rim. Mormon Lake is the largest natural lake in Arizona and this area is where most of the wild elk in the state hang out.

The Mogollon Rim District is that area where the Colorado Plateau drops up to 2,000' down into the Desert Canyon Country of central Arizona. This is an area of rugged countryside and huge views, where the vegetation makes the change from evergreen forests to cactus and ocotillo.

The Red Rock District is the southwestern part of Coconino National Forest, that area in central Arizona below the Mogollon Rim around Sedona and Oak Creek. This area is classed as a "high impact recreational area" and the Forest Service has instituted a "pass" program for users of this area. It is permissible for folks to stop and stretch or take a couple of photos, but if you stop in any one place for more than 15 minutes save yourself the problem: pay the $5 fee for the daily pass (longer term passes are available, too).

Coconino National Forest contains some of the most varied and sought-after countryside in Arizona: from the highest point to some of the lowest points. The vegetation varies from high alpine tundra through aspen and spruce to Ponderosa to pinon and cedar to sagebrush and creosote bush to cactus and ocotillo. From the Arizona Snowbowl to Sedona's Red Rock Country, there's a bit of almost everything here.

Scattered through the Forest you'll also come across a number of archaeological sites: some protected as National Monuments, State Parks, etc., some not. Federal and State laws are in place to try to preserve and prevent the disturbance of these historical and cultural sites, hopefully saving them for future generations to enjoy. You'll also come across old homesteads, stage stops, mine sites, railroad beds, logging camps, cow camps and other remains from more modern visitors to this countryside. For that matter, there's even an old road (now part of the trail system) that leads to the top of the Kachina Peaks (folks used to be able to drive their Model T's up there). 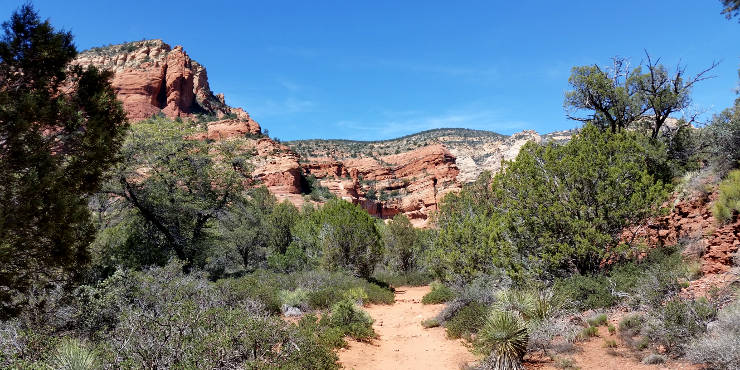 Below is an alphabetical listing of the developed campgrounds on Coconino National Forest. Most campsites in these campgrounds (but not the group sites) are designed to accommodate up to 8 people with one vehicle. Some sites have room for a second vehicle, but an extra vehicle charge may apply. If you find dead or downed wood around your campsite, it is legal to cut and burn that in your campfire, but do not pack that wood up and take it out of the Forest with you (you need a firewood-gathering permit for that and those usually apply only in special areas).

If you prefer primitive camping to the developed kind, you can camp almost anywhere on Coconino National Forest except where "No Camping" is posted. However, there are still certain guidelines to be followed:

The Red Rocks District prohibits primitive camping, dispersed camping, "Camping on your Own," anywhere within the "pink-salmon" colored area on this map. If you want to camp in this area, you must be in a designated campground area.

Bell Rock, at the edge of Munds Mountain Wilderness

Contained below is a list of some of the trails available on the Coconino National Forest, broken down by ranger district. This is not an exhaustive list, just a list of some of the more popular trails for hiking, horseback riding and mountain biking. Some are segments of much longer trails, like the General Crook Trail and the Arizona Trail. Some are combinations of trails that work together as loops. Some of these trails either are fully in Wilderness or cross Wilderness, so Wilderness Rules and Regulations apply to those sections of the trails (particularly the part about no mechanized vehicles including mountain bikes allowed). There's enough here to keep someone busy for more than few days...

The Mogollon Rim, from the top of Oak Creek Canyon
Small icons courtesy of the US Forest Service
Photos courtesy of TheArmchairExplorer, CCA-by-SA 4.0 License