In the San Pedro Parks Wilderness

The San Pedro Parks Wilderness is 41,132 acres of great beauty located at an average elevation of 10,000' in the western Jemez Mountains of northern New Mexico. This is an area of meadows and large grassy parks dotted with high, rolling mountaintops. The area tends to be wet and has many trout-filled streams to show for it. The forest is mostly stands of mixed conifers and Engelmann spruce alternating with smaller stands of aspen. The meadows and parks are filled with sedge, rush, oat grass, and bluegrass sprinkled very liberally with multitudes of wildflowers.

San Gregorio Lake is the main body of water in the Parks. Various streams cut through the meadows and mountains supporting the native Rio Grande Cutthroat trout population. Fishing and hiking in the Parks is very popular in the summer with cross-country skiing and snowshoeing taking over when the snow flies. San Pedro Parks Wilderness is located in the southern portion of the Coyote Ranger District and the northern portion of the Cuba Ranger District.

There are 9 major trails in the San Pedro Parks Wilderness, 4 of them are part of the mesh that comprises the Continental Divide National Scenic Trail. The CDNST crosses the Wilderness on its way from Carson National Forest to Cuba, NM. There are some excellent camping areas close to good water scattered through the Wilderness. This area is home to a good population of deer, elk, grouse and black bear. Snowfall starts adding up in November and can stay well into May (snowfall accounts for maybe 3/4 of the annual 35" of precipitation). May and June tend to be dry but July and August are monsoon season with frequent heavy thundershowers. Summer days will see temperatures into the high 70's but nights can be near freezing. 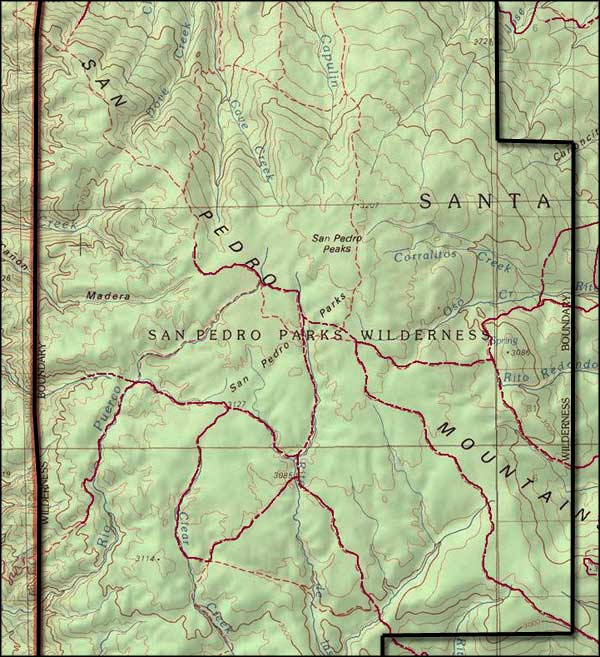