Bisti-DeNaZin Wilderness is a remote desolate area also known as the Bisti Badlands. This is an area of ancient ocean bottom that lay buried and undisturbed until the end of the last ice age, about 10,000 years ago. When the glaciers were advancing, they scraped the surface materials away. As they melted and retreated, a 1,400' thickness (the Fruitland Formation) of underlying layers of shale, coal, mudstone and jumbled sandstone were exposed to the elements and this steeply eroded badlands that we see today began to be created. This is an ever-changing environment with some of the most fantastic and unusual scenery found in the southwestern states. Most of the eastern part of the Bisti-DeNaZin Wilderness is exposed Kirtland Shale: eroded, multi-hued smooth rock.

With only about 8" of precipitation in this Wilderness every year, the mazes of fantastic hoodoos on this 38,305 acres have been a long time in the making. At an average elevation of 6,300', this area is usually baked by the sun until the monsoon season arrives in July and August. That's when most of the annual precipitation arrives. In the rain, this normally hard surface turns into a slippery, crumbling something that is really hard to move around on.

The lack of animal life in these badlands testifies to the unusually harsh environment. The "trails" are constantly shifting as the countryside erodes and changes shape every year. That same annual erosion can easily expose new fossils from the dinosaur days when the environment was radically different from today's. When hiking here carry a compass (or GPS device), a map and lots of water (because you won't find any along the way). Also be aware that three private parcels of Navajo land are enclosed within the Wilderness. Horseback and backpack are allowed but campfires are not. And if you get lost, well... you're liable to be the only person out here for a while (actually, Bisti, on the western side of the Wilderness, sees about 10,000 people per year while DeNaZin, on the eastern side, sees about 1,000 people per year).

Bisti-DeNaZin Wilderness is open year round with no fees, but no amenities either. This is true desert wilderness. Whatever you need, you better bring with you. This is also a Pack it in, Pack it out area.

To get to Bisti, get on NM 371 at either Farmington and go south for 36.5 miles from the San Juan River crossing, or go north from Crownpoint for 46 miles to just past the crest of the hill after the Don Gleason Bridge over DeNaZin Wash. From north or south this will bring you to the non-county-maintained Road 7297 (aka Navajo Nation Road 7000). Turn east on that and go about 2 miles to the Bisti parking area.

To get to DeNaZin, turn west off US 550 at the Huerfano Trading Post and take CR 7500 to the parking area. In bad weather, CR 7500 is impassable.

As this area is designated wilderness, there are special rules:
> No motorized or mechanized vehicles (including mountain bikes) allowed.
> No campfires, no collecting petrified wood or fossils, no climbing on the geologic features allowed.
> No groups of more than 8 people allowed.
> No trespassing on tribal lands.
> Grazing, scientific research and commercial guides need permits. 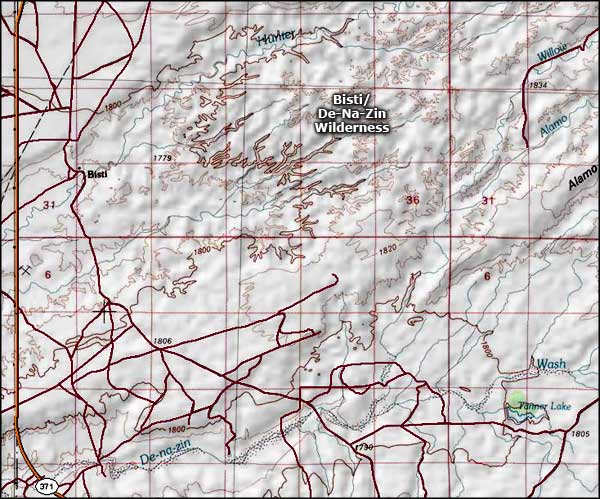