Grand Bay National Wildlife Refuge is slated to grow to some 32,000 acres in size, straddling the Mississippi/Alabama state line against the Gulf of Mexico. Presently, the 10,188-acre refuge partially overlays the Grand Bay National Estuarine Research Reserve. Together, the properties protect some 18,000 acres of this valuable habitat. Grand Bay National Wildlife Refuge was established in 1992 under the auspices of the Emergency Wetlands Resources Act of 1986. Grand Bay was designated specifically to preserve and protect one of the largest undisturbed pine savanna ecosystems left in the Gulf Coastal Plains region. Access to the interior portions of Grand Bay NWR is limited, and that limited access is available almost exclusively on the Mississippi side and even then, access is possible only by boat.

Most of Grand Bay NWR is a mosaic of pine savannas interspersed with pond cypress stands, frequently flooded bottomland hardwood forest, and poorly drained evergreen bays. As you cross the land heading south, that graduates to estuarine salt marshes. Elevations are so low the whole area is often flooded. Among the resident wildlife are raccoon, squirrel, white-tailed deer, beaver, coyote and wild turkey. You might also see bald eagle, gopher tortoise, red-cockaded woodpecker and brown pelican. About 16% of Mississippi's total waterfowl population spends the winter in the marshes along the southern edge of Grand Bay NWR. They hang out there because the fishing for red drum, speckled trout, Atlantic croaker, flounder and mullet is excellent.

Grand Bay National Wildlife Refuge is located about 20 miles west of Mobile, Alabama, about 7 miles east of Pascagoula, Mississippi. The easiest way to get there: get off Interstate 10 at exit 75 (the Franklin Creek exit) and go south to US Highway 90. Cross US 90 to Pecan Road and go about 1 mile to the very busy Bayou Heron Road railroad crossing. Cross the tracks and stay to the right. Another mile should bring you to the refuge office. Grand Bay is open to the public from dawn to dusk every day. The refuge trails, roads and waterways are open for public use but unpaved roads will be closed in wet conditions to protect the roads from vehicular damage. 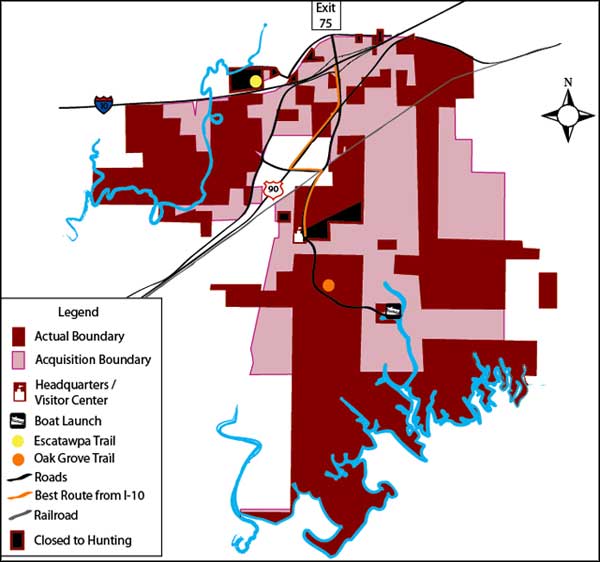