US Fish & Wildlife acquired Sunkhaze Meadows in 1988 to preserve and protect the second largest peat bog in the State of Maine. The meadow is crossed by Sunkhaze Stream and its six tributaries, making a veritable wetland wonderland surrounded by a rich and diverse upland. There are five bog domes on the property, areas of thick layers rich in live and decomposing peat moss. Because the primary water input is rainwater and rainwater contains almost no nutritional "supplements" for a plant community, only those kinds of plants that can efficiently capture what little nutrients do exist can survive. That means large amounts of peat moss mixed with baked-apple berry, cranberry, sheep laurel, leatherleaf, black crowberry, dwarf huckleberry, cotton grass, pitcher plant and stunted black spruce.

The Benton Unit is a mix of small riparian habitats, grasslands and a mix of young softwood and hardwood forest. The Sandy Stream Unit is a mix of former cultivated fields, floodplain forest and upland shrub. Among the three units the refuge provides habitat for at least three invertebrates, two mollusks, three plants and seven birds considered either threatened or endangered by the State of Maine.

The refuge is open from half-an-hour before sunrise to half-an-hour after sunset every day of the year. Hunting and fishing are allowed subject to state regulations and seasons. 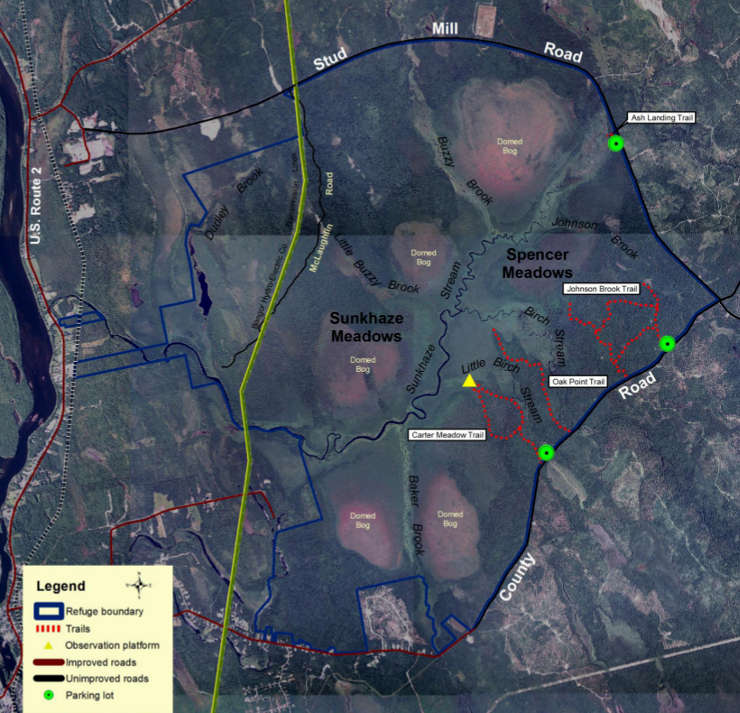