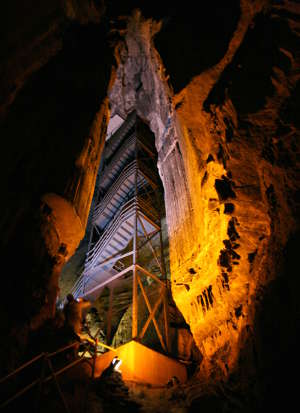 The cave system developed over millenia in the thick layer of Mississippian-age limestone that underlies virtually everything in the Mississippi River Valley. In the area of Mammoth Cave that limestone is overlain by a thick layer of sandstone caprock, a layer which makes the underlying cave system very stable. That sandstone is relatively impervious to water penetration except in the areas of vertical cracks. Those vertical cracks are the only way surface water can descend to the limestone layer and continue in the creation of the cave. That means the upper levels of the cave system are quite dry and have no stalactites or stalagmites growing. It's only when you get down to the interface of the Girkin Formation and the Ste. Genevieve Limestone that the "real" cave begins. There are also areas within the park where that sandstone layer has been eroded away and the limestone layers meet the surface.

Sections of Mammoth Cave were used by Native Americans several thousand years ago. Archaeologists excavating Native American sites inside the cave have been able to establish a timeline during the Late Archaic and early Woodland periods based on the food being consumed at the time: the late Archaic period was a time of hunter-gatherers while the early Woodland period saw the transition to a more agrarian and sedentary culture. Many years later the Euro-Americans arrived and homesteaded most of the area. The Historic Entrance to Mammoth Cave was discovered around 1798 but for the first fifteen years, the only activity in the cave was in pursuit of saltpeter, a necessary element for the making of gunpowder. With the end of the War of 1812 the market for saltpeter collapsed. The cave then became a minor tourist attraction whose fame grew through the 19th century until in the early 1900's, the "Kentucky Cave War" broke out. The Cave War involved shady operators making false claims about other caves nearby and in many cases, changing the road signs to send would-be Mammoth Cave visitors to other destinations. Eventually, Mammoth Cave National Park was authorized by Congress and private citizens formed the Mammoth Cave National Park Association. Donation money was used to buy a few parcels of land in the target area but the primary tool used to "acquire" land was eminent domain: thousands of people lost their land to eminent domain and were forced to relocate. Then there was a problem with who owned the land as it was illegal for the National Park Service to fund renovations or new construction on land owned by the private association. Somehow it was worked out so that a maximum of four CCC camps were built on the future National Park land and the workers set about building most of the infrastructure at the park that we see today.

In the winter (beginning of November to the middle of March), the visitor center is open from 8:30 am to 4:30 pm. The rest of the year those hours expand to 8 am to 6 pm. Access to the park and most of its surface amenities is free, it's the cave tours, camping and picnic shelter reservations that cost money. 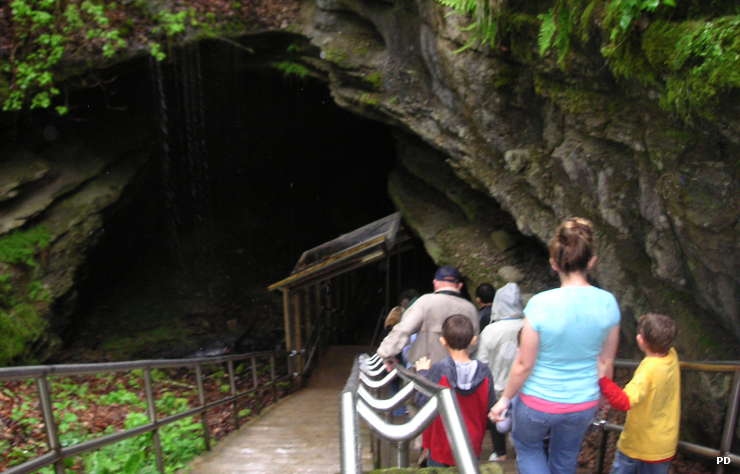 Heading into the original entrance to Mammoth Cave 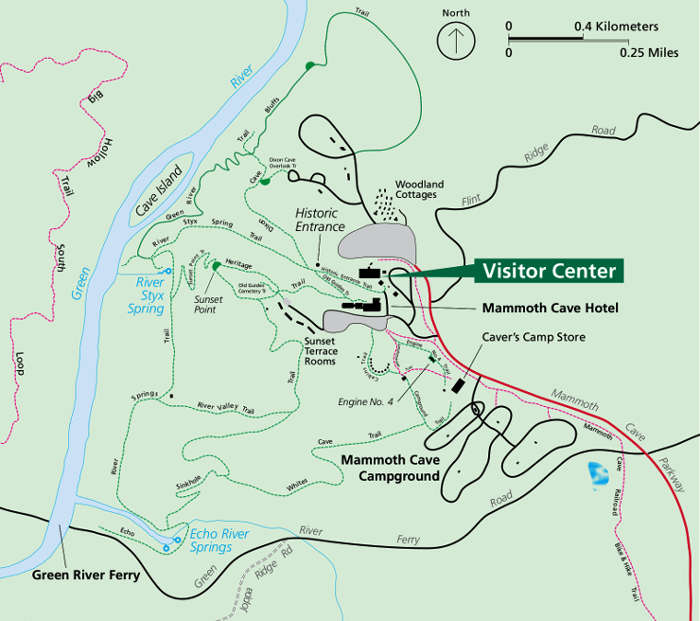