Half Moon in Clifty Wilderness

This is an intricate canyon system where you'll find rock shelters, high sandstone cliffs and more than 100 natural sandstone arches. The Red River Gorge has become a major draw for rock climbers in eastern Kentucky with difficulties ranging from 5.2 (2) to 5.14c (8c+) in the Yosemite Decimal System.

On the 12,646 acres of Clifty Wilderness you'll find at least 15 rare, sensitive or endangered plant species among the more than 170 species of moss and 750 species of flowering plants. The Red River bisects the Clifty Wilderness, that 9-mile section of the river being designated as Wild & Scenic. Folks do raft the river in this area, usually from late December to late May when there is enough water flow to provide reasonably safe Class II and III rapids.

This is designated wilderness: all land travel is by foot or horseback only, all water travel is non-motorized. Backpacking, hiking and primitive camping are allowed everywhere, just be careful of the cliffs. 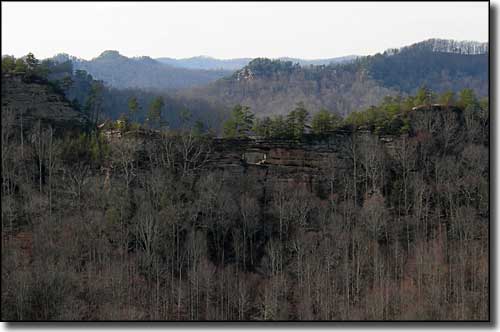