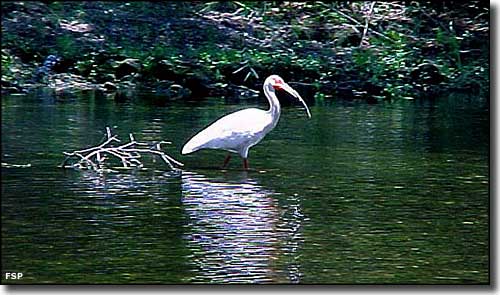 A white ibis in Paynes Creek 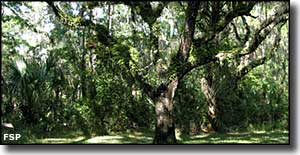 After the Second Seminole War ended in 1842, a series of trading posts were built along the north and west edges of the Seminole Reservation. In early 1849, a trading post was built for Dempsey Whiddon and Captain George Payne on the Charlo-popka-hatchee-chee (Little Trout Eating Creek in the Seminole language) near what is now Bowling Green, Florida. It wasn't a bad spot but it was a bad time. As usual in these matters, white settlers had been ignoring the terms of the treaty that ended the war and were continually encroaching on Seminole land. The aggravation came to a head and five renegade Seminoles killed Payne and Whiddon on July 17, 1849, then they burned the store and everything in it to the ground.

When news got out, the white trespassers who caused the problem in the first place all ran for the protection of a military fort and screamed for the military to take revenge on the Seminoles so that they could return to "their" homes in peace and safety.

On October 26, 1849, Fort Chokonickla was established very near the site of the burned trading post. Shortly, the name of the nearby creek was changed to the name it is known by today: Paynes Creek. The problem with the fort, though, is it was built near a large swamp, a swamp filled with malaria-carrying mosquitoes. Within a few months, the malaria problem was so bad the fort's doctor recommended the Army abandon the site and that was done, less than nine months after the fort was occupied. The Seminoles didn't want another war and never fired a single shot, the Army was vanquished by the mosquitoes.

Today, visitors can enjoy kayaking, canoeing and fishing on Paynes Creek and the nearby Peace River. The 410-acre park also offers natural areas with established hiking trails and a picnic area with a pavilion. The visitor center doubles as a museum depicting the lives of pioneers and the Seminole Indians during the 1800's. On the property are the Fort Chokonickla site, the Payne-Whiddon Trading Post site and the Monument erected in honor of Captain Payne and Dempsey Whiddon.

Paynes Creek Historical State Park is open for day use only from 8 am to sunset, every day of the year. The visitor center is open daily from 9 am to 5 pm. To get there: Go to Bowling Green on US Highway 17, turn east on Main Street and follow the signs to Lake Branch Road and the park. 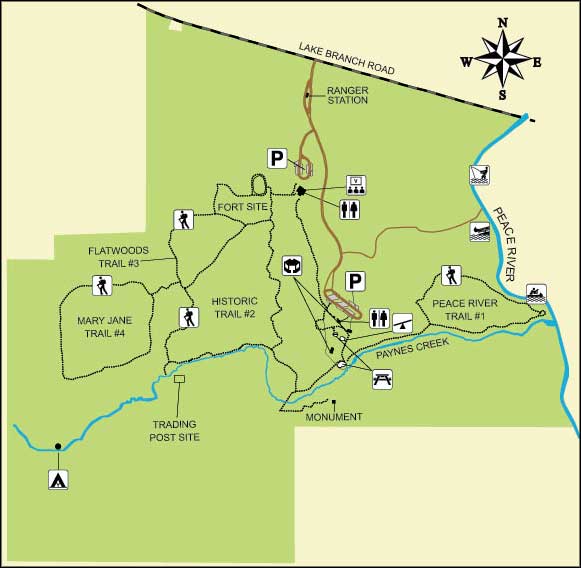