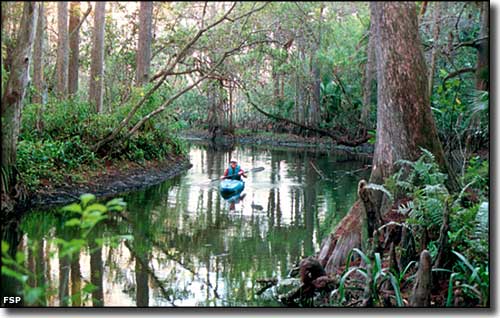 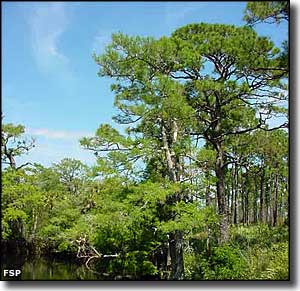 Jonathan Dickinson State Park is crossed by Florida's first federally designated Wild and Scenic River: the Loxahatchee River. There are 13 natural vegetation communities represented on the property including pine flatwoods, sand pine scrub, river swamps and mangrove swamps. The park offers trails for boating, canoeing and kayaking in addition to numerous off-road hiking, biking and equestrian trails. Also on the property is the Elsa Kimbell Environmental Education and Research Center with exhibits and displays detailing the nature and history of the park. The Elsa Kimbell Center is open from 9 am to 5 pm daily.

Mountain bikers will find a couple miles of paved trails along the route of the old Dixie Highway while the Camp Murphy Off-Road Bicycle Trail System offers nine miles of trails with ratings from beginner to "black diamond-experts only."

The park has a newly rebuilt boat ramp on the Loxahatchee River and the river empties itself into the Intracoastal Waterway and Atlantic Ocean only a few miles away. The lower part of the river is often filled with manatees so "idle speed" limits are in force at all times. The upper Loxahatchee flows beneath a canopy of centuries-old cypress trees while the lower Loxahatchee is essentially a mangrove-lined estuary filled with bird life. To explore, you can rent canoes, kayaks and motorboats at the park's concession.

Equestrians will find eight miles of equestrian trails (as long as they have proof of a recent negative Coggins test for their horses on their person). There is also a five-site equestrian campground available offering water, electric, picnic tables and barbecue grills.

The Florida National Scenic Trail traverses Jonathan Dickinson State Park north/south and there are two primitive backpack camps along the route. Each has a pitcher pump nearby (treat the water before using it) but you'll want to bring your own cook stove as collecting firewood in the park is not allowed. Jonathan Dickinson State Park offers three other marked and maintained hiking trails, two of which start from trailheads in the main picnic/concession stand area.

The primary picnic area is on the shore of the Loxahatchee and offers dozens of picnic tables and grills in addition to the four picnic pavilions. The children's playground and the general river swimming area are both close by, as is a modern restroom with an outdoor shower.

Pine Grove Campground is near the ranger station on the east side of the park and offers 90 sites, all with electric, water, cooking grill and picnic table. River Campground offers 45 sites near the Loxahatchee River, also offering water, electric, cooking grills and picnic tables. Both campgrounds have central restroom/shower facilities and each has its own RV dump station. Maximum RV length: 45 feet.

Also near the river are 12 rustic cabins for rent. Each cabin can accommodate up to six people with a bedroom, bathroom, kitchen, dining area and living area. Everything is supplied except food, bed and bath linens and personal stuff. Each cabin also has an outdoor fire ring and picnic table.

Trapper Nelson, the famous "Wildman of the Loxahatchee" made his home on what is now park property. He was a trapper and fur trader most of his adult life but when fame caught up to him, he had the foresight to morph himself and his home into a tourist attraction ("Trapper's Zoo and Jungle Gardens"). Then he was killed in 1968 and his murder is still not solved. His camp is open to the public from 9:30 am to 4:30 pm, Thursday through Monday but is only accessible by boat. 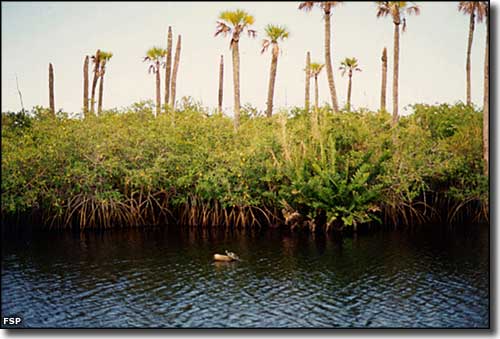 Palms rise above the mangrove forest 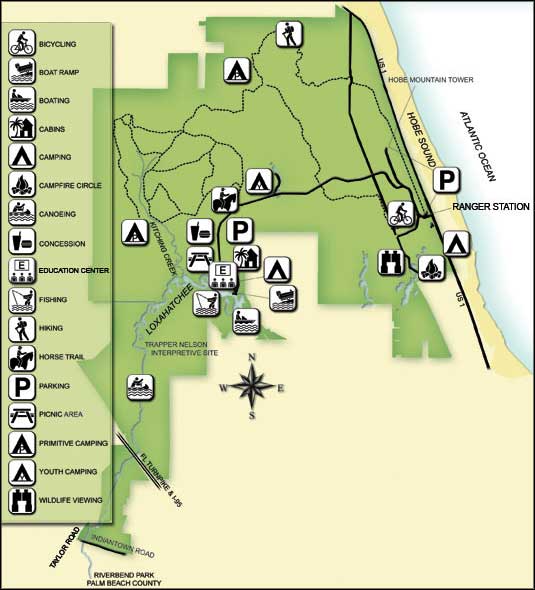