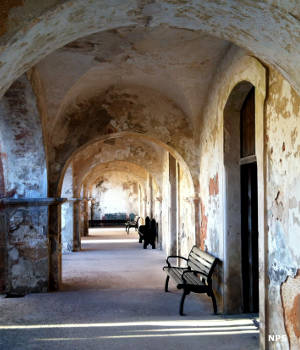 San Juan National Historic Site is a 75-acre property that preserves and protects some of the earliest Spanish constructions in the New World. One of them, Castillo San Cristobal, was the largest Spanish military installation in the Western Hemisphere, built to protect the city of San Juan from land attack. When finished in 1783 it enclosed about 27 acres of land, virtually the entire Old City of San Juan.

Among other sections of the National Historic Site are several formidable forts guarding the harbor from sea approach. The city had been founded in 1521 and the first fortifications built in 1533. As a center for Spanish trade for several centuries, San Juan was attacked several times by major European forces but the city was never really sacked until the Dutch invaded by land in 1625. When the Spanish reasserted control over the area orders were issued to construct fortifications to protect against another land-side attack but it was 140 years before that construction began.