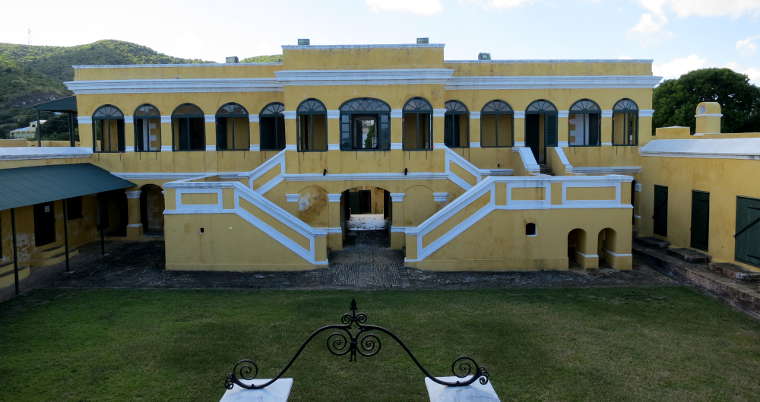 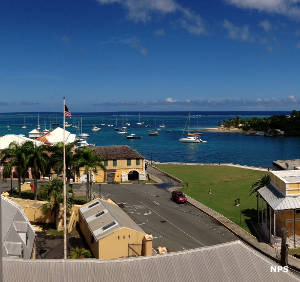 The seven-acre Christiansted National Historic Site was first dedicated in 1952 as the Virgin Islands National Historic Site but was rechristened with the present name in 1961. Contained within the seven acres are several buildings of historical significance in the history of the Virgin Islands as Christiansted was the seat of government of the Danish West Indies from 1733 to 1917 (when the islands were sold to the United States).

From 1734 to 1755, the Danish West Indies and Guinea Company (a royal monopoly chartered primarily for trading in slaves) virtually crushed the economic life out of the colonists. Then the Danish crown bought the company in 1754 and the situation improved quickly. The years from 1760 to 1820 are known as "The Golden Age of St. Croix," a direct result of Danish Free Trade laws and the island's strategic position in the "Triangular Trade" (shipping sugar, rum and other products to European markets to be sold and the ships reloaded with manufactured goods for trade in West Africa for slaves taken to St. Croix...) The island's economy was tied to the fortunes of sugar in the world markets and that changed during the Napoleonic wars when sugar beets came into production. Then came the inevitable financial depression in the 1820's as sugar beet technology spread. Then came the emancipation of the slaves in 1848 and a long series of hurricanes and environmental disasters that Christiansted never recovered from. But the profits made between 1760 and 1820 are said to have been "legendary."

Today's National Historic Site was set aside as an initiative by local people to preserve and protect the historic structures and grounds and to interpret the economy and way of life that had existed under Danish rule. The Danes first claimed land in the New World in 1672 when they claimed the island of St. Thomas. They included St. John in 1717 but neither island gave them a large enough expanse of arable land to make the effort worthwhile. Then in 1733 the company bought St. Croix from the French and, after unsuccessfully putting down a slave rebellion on St. John, surveyed most of the island into 150-acre parcels perfect for the growing of sugar and similar tropical crops. Within a few years the population topped 10,000 (9,000 of them African slaves) and dozens of sugar factories were in operation. By 1850 more than 115,000 African slaves had come ashore at Christiansted's main wharf. The economy wasn't just about slaves either as there were almost as many Free Blacks as there were free whites, and in many cases blacks and whites practiced the same professions side-by-side. Christiansted was a true cultural melting pot where shared values of professionalism, skills and morality bound individuals of different race, ethnicity and social stature together.