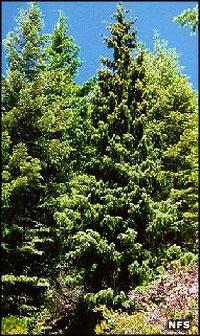 Red Buttes Wilderness is a 20,796-acre property straddling the state line between California and Oregon. About 17,366 acres are in California, about 3,430 acres in Oregon. The wilderness is also shared between the Klamath and Rogue River-Siskiyou National Forests. Included in the wilderness is the crest of the Siskiyou Mountains between the Klamath and Rogue River drainages. The name is derived from the reddish-orange color of the Red Buttes themselves, that color being caused by high iron and magnesium content in the exposed rock.

Elevations vary from about 2,800 feet in the bottom of Butte Fork Canyon to 6,740 feet on the summit of the eastern Red Butte. The wilderness area is essentially 13 miles long and 6 miles wide and contains the headwaters of the Illinois River. Most waterways on Red Buttes Wilderness are part of the Rogue River watershed.

Most of the rock in the Siskiyou Mountains is former ocean bottom (meaning: sedimentary) several hundred million years old. Over time, the sediments have been exposed to pressure and heat and have metamorphosed into a complex variety of rocks: quartzite, gneiss, schist and white marble. The Siskiyou basins were also sculpted by small glaciers during the last Ice Age and now contain several lakes and large meadows in U-shaped valleys.

The higher slopes of the wilderness are forested in Shasta red fir, white fir, mountain hemlock and knobcone pine, the lower elevations in sugar pine, ponderosa pine, incense cedar and Douglas fir. Also on the wilderness are western white pine, Jeffrey pine and Brewer spruce. Some species of trees and plants are endemic to the region and found nowhere else on Earth.

Among the large mammals on the property you might see blacktail deer, black bear, ringtail cats, bobcats, coyotes and mountain lions. This is another area in northern California that has a long history of Bigfoot sightings...

Red Buttes Wilderness officially became wilderness in 1984. Before that, humans began impacting the area as early as the Siskiyou Mountains Gold Rush in the early 1850's. Prospecting and small-scale mining continued into the 1920's and the Forest Service built a few trails and cabins in the area in the 1930's. The federal government built a narrow mining road from the Klamath River to the chromite deposits on the southern slope of the Red Buttes during World War II.

Summers tend to be dry and there is precious little water available in some areas. Winters usually see the area buried in snow. The northern slopes see more waterflow and hold more small tarns than the southern side of the mountain crest. Azalea Lake is the largest lake on the property at about 20 acres and is located in the western half of the California portion. It's probably the most popular destination in the wilderness and trails from there lead to almost everywhere else.

Red Buttes Wilderness offers several established hiking trails but maintenance has been spotty for years. The Bigfoot Trail passes through the wilderness on an amalgamation of trails that are hardly ever used. About 35 miles of the Pacific Crest Trail skirts Red Buttes Wilderness, passing close to Lilypad Lake at the foot of the Red Buttes themselves. Trail 957 runs east-west across the wilderness for about eight miles, following the flow of the Butte Fork of the Applegate River and passing through one of the largest old-growth stands of mixed-evergreen forest in the area. Just a few miles north of the wilderness is Oregon Caves National Monument.