The Presidio of San Francisco

An aerial view of the Presidio of San Francisco

The Presidio of San Francisco has a long and colorful history in the annals of California and the United States. The location was chosen by Juan Bautista de Anza on March 28, 1776 but the first actual fort wasn't constructed until September 1776. By 1783, the garrison at the Presidio had grown to 33 men.

The Spanish government never really supported the Presidio and when Mexico gained independence in 1821, support for the fort fell even more. An earthquake in 1827 caused extensive damage to some buildings at the fort and in 1835, the majority of the Presidio garrison moved to Sonoma, leaving only a few men behind to watch as the buildings crumbled further.

During the Bear Flag Revolt in 1846, Lt. John C. Fremont and a few men sailed across the Golden Gate and took the Presidio without a shot. They proceeded to spike the cannons there and make them unusable in a conflict. Shortly after that, the US Army occupied the Presidio and it soon became the primary military installation on the Pacific Coast, participating in several major wars and acting as the command center for most operations on the Pacific Rim.

Soldiers stationed at the Presidio also played pivotal roles in the aftermath of the 1906 San Francisco earthquake, establishing communications, distributing supplies, offering medical treatment and providing shelter, water, food and sanitation. For several months after the earthquake, thousands of citizens lived in tent cities on the Presidio.

In 1994, the military mission was ended, the base deactivated and turned over to the National Park Service. In 1996 the Presidio Trust was formed as a US Government Corporation and was charged with operating the property in conjunction with the National Park Service and making the park financially self-sufficient by fiscal year 2013. The Trust began immediate preparations for rehabilitation (many areas had to be completely decontaminated before public use could be allowed) and was able to rent enough property to private and public entities to attain that financial self-sufficiency in 2006. However, in the drive to maximize income at the expense of preserving the integrity of the National Historic Landmark District, a real visitor center has yet to be built. However, the Letterman Hospital was demolished and the Letterman Digital Arts Center was built to replace it. The LDAC is now home to LucasArts, Industrial Light and Magic, Lucas Learning, Ltd., Lucas Online and the George Lucas Educational Foundation. Fort Scott is now home to the National Center for Service and Innovative Leadership, an institution that offers programs in leadership development, research and convening to help purpose-driven leaders achieve greater impact in their communities as they work together to address shared social challenges.

About 20% of the property (primarily the coastal bluffs and beach areas) is managed by the National Park Service as part of the Golden Gate National Recreation Area. On the edge of the Presidio against San Francisco Bay is the Visitor Center of the Farallones Marine Sanctuary.

The Presidio Visitor Center is temporarily located in Building 105 on Montgomery Street at the corner of Lincoln Blvd. The Visitor Center is open Thursday to Sunday, 10 am to 4 pm. Park entrance and all National Park Service programs at the Presidio are offered free of charge. Group camping, commercial filming, weddings, fairs and races all need permits: contact the Presidio Trust at 415-561-5300 or the Special Park Uses Group at 415-561-4300. 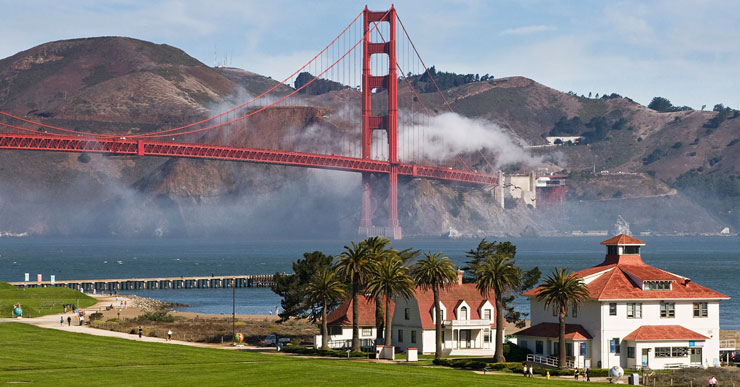