The peninsula is a land of wild coastal beaches and headlands, uplands, estuaries... The northernmost part of the peninsula is maintained as a reserve for Tule elk. Commercial farming has been allowed on parts of the Seashore and some areas are managed in cooperation with other conservation authorities. The National Park Service, though, puts up the signs and tries to manage the volume of human impact on the area. The Seashore staff also manage bits and pieces of other nearby property in its role as a unit of the Golden Gate National Recreation Area.

The Point Reyes Lighthouse is a favorite gathering place for whale watchers in mid-January and mid-March while the gray whale are migrating south and north just offshore. On Drakes Bay is the 5,965-acre Drakes Bay Historic and Archaeological District containing fifteen historic and prehistoric Native American sites, Sebastiao Soromenho's ship wrecked on the peninsula in 1595, and Nova Albion, the campsite made by Francis Drake during his visit to Point Reyes in 1579. Near the District visitor center is the recreated Coast Miwok village named Kule Loklo. The remains of more than 120 Coast Miwok Indian villages have been found within the boundaries of Point Reyes National Seashore but the Miwoks are essentially gone from the area now.

33,373 acres of Point Reyes National Seashore is also designated as the Phillip Burton Wilderness, named in honor of the Congressman who helped create the Golden Gate National Recreation Area and was instrumental in getting the 1984 California Wilderness Act passed. The wilderness is a roadless area set back from the beach. There are more than 100 miles of established trails in the wilderness, leading to places where you can watch the Tule elk grazing or watch the kangaroo rats running among the dune grasses, and a lot in between.

The trail system at Point Reyes is extensive and well-developed. Some trails travel through fern-laden canyons, others stretch out along the sandy beaches, at least one climbs to the summit of Mt. Wittenberg (1,407 feet), highest point in the park. North and South Beaches are often wind-swept and usually heavily pounded by the waves (I remember the noise being deafening before I even cleared the last dune onto the sand).

Entry to Point Reyes National Seashore is free. The park is open daily from sunrise to midnight. The Bear Valley Visitor Center is open weekdays from 10 am to 5 pm, weekends and holidays from 9 am to 5 pm. The Lighthouse Visitor Center is open Fridays through Mondays, 10 am to 4:30 pm. Overnight camping requires possession of a permit. Camping fees depend on how many people in your group. When visitation to the Point Reyes Lighthouse is heavy (from late December to mid-April), visitors might be required to ride the shuttle bus from Drakes Beach to the Lighthouse and Chimney Rock areas ($5 per person, round trip, subject to change). 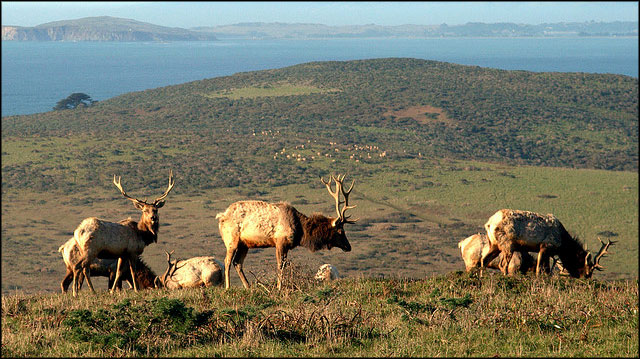