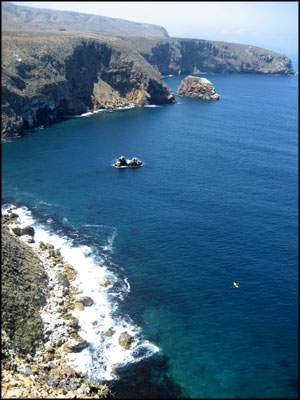 Before the remainder of the indigenous human population was removed in the early 1800's and replaced with sheep and cattle ranches, the islands were also home to sea otters, bald eagles and numerous other species that didn't long survive the newcomers arrival. Now that most of the islands are in the control of the National Park Service and several environmental conservation organizations, the islands are beginning to return to that original state of pristine paradise.

The five islands of the park itself are San Miguel (9,325 acres), Santa Rosa (52,794 acres), Anacapa (699 acres), Santa Barbara (639 acres) and Santa Cruz (60,645 acres, of which 76% is owned by the Nature Conservancy and the rest by the National Park Service). There are three other major islands to the south, offshore from the Malibu-Los Angeles area.

The Channel Islands have a long maritime history that includes numerous shipwrecks that testify to the hazards posed by the islands to mariners attempting to navigate the narrow channel. The Coast Guard built a lighthouse on Anacapa Island in 1932 and that facility is still in operation. President Franklin D. Roosevelt established the Channel Islands National Monument in 1938, covering only Santa Barbara and Anacapa Islands. That Monument was later enlarged to include a one-mile buffer offshore of the islands that brought the kelp beds and sea life in those areas under federal protection. When Channel Islands National Park was established by President Ronald Reagan in 1980, the park grew to include Anacapa, Santa Rosa, Santa Cruz, San Miguel and Santa Barbara Islands and large areas immediately offshore (up to 6 nautical miles offshore). Technically, that offshore section of the park is the Channel Islands National Marine Sanctuary and is under the jurisdiction of the National Oceanic and Atmospheric Administration.

The Channel Islands of California show evidence of human habitation going back more than 12,000 years. A site on Santa Rosa Island has yielded human remains that bone protein analysis and radiocarbon dating indicate were deposited about 13,000 years ago. At that time, the four northern islands were still a single island and with the planet still gripped in the Ice Ages, the global climate was much cooler than it is now. The presence of those human remains also indicate that those ancient people traveled by watercraft and gives credence to the theory that some of the people who migrated eastward from Asia back then traveled by sea and not just via the Bering Land Bridge. Other archaeological digging and testing has found that pygmy mammoths were probably still living on Santa Rosa Island at that time, too. Other sites on San Miguel Island indicate a continuous occupation of that area since about 10,000 years ago.

The Native American Chumash have an oral history that indicates they have been living in the northern Channel Islands since the end of the last major Ice Age, about 10,000 years ago. When Europeans first set foot on the islands, they discovered a people that had integrated the resources of land and sea into everything they did... and they displayed a deep wealth of knowledge, culture and religious symbolism. However, the indigenous people were no match for the European diseases, weaponry and greed: by the early 19th century, the Chumash and Tongva had been removed to missions on the mainland, the larger islands had been developed into vast sheep ranches and the channel waters were being aggressively harvested for their fish and marine mammals. These days, you have to look hard among the historic ranch complexes and military installations to find the remains of ancient Chumash villages. On the other hand, the Chumash also lived along the mainland coast from the San Luis Obispo area south to the Malibu area and, with the exception of the Channel Islands, still inhabit those territories and more. The Southern Channel Islands were inhabited by the Tongva people, who also lived on the mainland in the area around what is now Los Angeles.

The first Europeans to visit the Channel Islands were part of the Cabrillo expedition in 1542-3. Juan Rodriguez Cabrillo was surprised by the friendliness of the Chumash that he met but diseases left behind after the Europeans left soon began to decimate the local population.

As more and more European settlers arrived in the area and began to exploit the marine resources, the native food sources became depleted. By the early 1820's the last Chumash on the Channel Islands had been removed, most of them going to the missions at Santa Ynez, Santa Barbara and San Buenaventura. The missions were heavily dependent on native labor to maintain their economies and that contributed further to the destruction of Chumash society. With changes brought about by Mexican independence, the missions were secularized and the remaining Chumash descended further into poverty. By the time of the California Gold Rush, the Chumash had been marginalized and were moving toward extinction. However, there are about 5,000 Chumash alive today, although the reservation in Santa Ynez represents the only federally recognized band.

After the Mexicans achieved independence, the Mexican government began sending settlers to California to solidify their claim to the area. At times, they tried sending convicted prisoners to live in separate colonies. One such colony was on the northern end of Santa Cruz Island and the area is known today by the name "Prisoner's Harbor." The story of the colony is rather bizarre and the colony didn't last long... and it seems to have been the final attempt by the Mexican government to set up a penal colony in Alto California.

In the mid-1860's, a contingent of Chinese fishermen arrived on the islands and began to develop an abalone fishing industry. Chinese from San Diego had been fishing the abalone in the area for several years already but with fishermen on-site, the industry really took off... which was a bit strange as some non-Chinese reckoned eating abalone meat was similar to "eating shoe leather." But there was a small market for abalone meat in San Francisco, a slightly larger market in Hawaii and a huge market in China. Then the 1870's saw a market develop for abalone shell products and shortly, the earnings for shell products far outstripped the earnings from abalone meat. That led to a near-total depletion of abalone in California coastal waters by about 1900 and that led to governmental bans on the fishing of abalone. 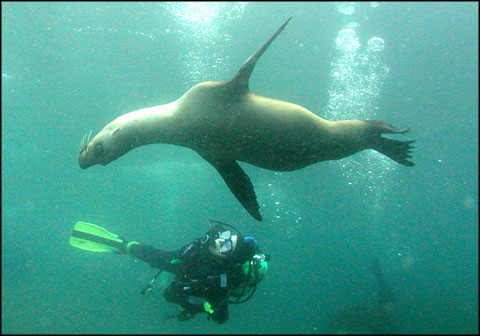 An islet off San Miguel Island is now home to a breeding colony of the California Common Murre. The species had been a regular for many years but disappeared from the area around 1912, most likely because their eggs were being over-harvested by humans on the island.

Northern fur seals returned to San Miguel Island in the 1960's after being hunted out of the area in the early 1900s. The first seals found on the beaches had flipper tags identifying them as having been part of the colony found on the Pribilof Islands in the Bering Sea. The San Miguel colony today numbers around 10,000 individuals.

Santa Rosa Island is home to an endangered variant of the Torrey Pine. Estimates suggest there may be only about 1,000 trees of the subspecies still living. Santa Rosa Island is also home to endangered populations of island fox, munchkin dudleya and spotted skunk and has one of three known populations of Hoffman's rockcress. A rare lichen was discovered on the island in 2007 and when described in 2009, was named Caloplaca obamae (after President Barack Obama).

Santa Barbara Island is home to a large sea lion rookery and several seabird nesting colonies. It is also home to the largest breeding colony of the threatened Xantus Murrelet. The seabird is considered threatened because so much of its breeding occurs on such a small and isolated island.

The islands are also home to a unique subspecies of deer mouse, a subspecies that tends to grow to be about 1/3 larger than mainland deer mice. At the same time, the population of deer mice on the islands is known to harbor the often-fatal hantavirus.

The park is open year round but the primary visitor center in Ventura is open 8:30 am to 5 pm daily except for Thanksgiving Day and Christmas Day. The outdoor visitor center in Santa Barbara is open 10 am to 5 pm daily, also except for Thanksgiving and Christmas Days. There are no entrance fees to visit the park but if you should want to camp overnight, there's a $15 per night/per site reservation fee (subject to change).

Private boats are allowed to land and disembark on all areas of the park except that area of Santa Cruz Island owned (and operated) by the Nature Conservancy. To go there you'll need to apply for a permit. To hike beyond the immediate area of the ranger station on San Miguel Island, private boaters must be escorted by a ranger and have a hiking reservation and permit. Call 805-658-5711 before leaving the mainland to make arrangements. To camp anywhere in the park (except on the Nature Conservancy property where camping is not allowed) means making advanced reservations via either 877-444-6777 or National Recreation Reservation Service. Once on the islands, all travel is by foot... 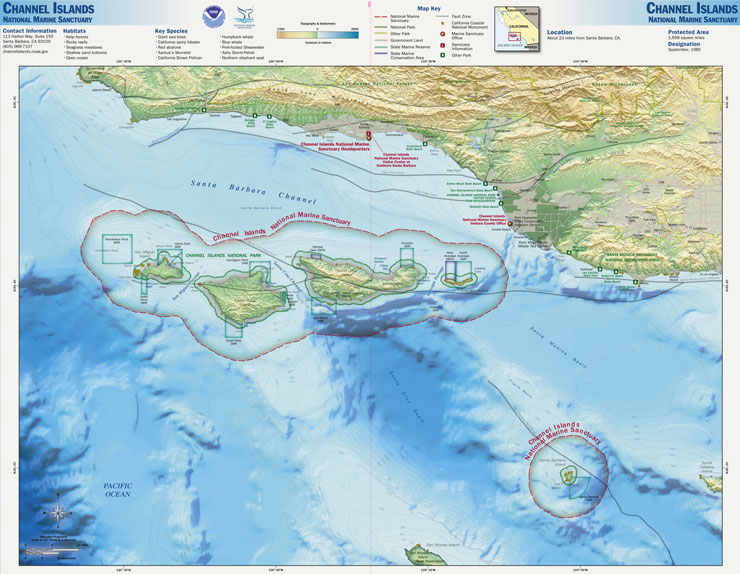