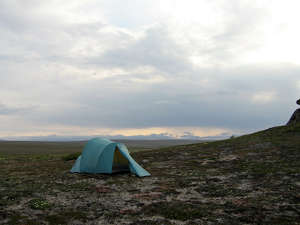 The Bering Land Bridge National Preserve is located on a remote section of the Seward Peninsula in western Alaska. During the last great Ice Age so much water on the planet was tied up in ice that sea levels dropped enough to open a wide land bridge between what is now the Seward Peninsula and Asia. Speculation said that thousands of Asians traveled across that land bridge and migrated south into the Americas to father those folks we now call "Native Americans." So many cultural, genetic and linguistic elements pointed to the truth of that speculation, then came the discovery of artifacts that, when carbon-dated, traced back to that era. Some of the oldest of those artifacts were discovered here, where we now have one of the most remote and inaccessible National Park Service properties: there's no roads, no trails, almost no modern amenities of any sort. For that matter, anything that travels on wheels might damage the tundra and is therefore banned from the property. In the summer you can come to visit by air, water or on foot. In the winter you can come via air, snowmobile or dog sled. Some of the lakes are large enough to land a float plane and there is an unimproved dirt airstrip at Serpentine Hot Springs. However you get there, with an average of less than 2,000 visitors per year you'd have a good chance of having the entire 2,697,391-acre property to yourself. That said, Native Alaskans do use the natural resources of the preserve in the same ways they have for at least 11,000 years.

The most visited place on the property is probably the Serpentine Hot Springs, because of the hot water and because of the holistic and spiritual significance of that area. There is a modern bunkhouse on the site and the valley is surrounded by some beautiful granite tors. Located at the crossroad of the Asiatic-North America flyway, the area also often sees some rare migratory birds from Asia mixed among the 170+ species that regularly appear.

Another area with a reasonable level of visitation is the Trail Creek Caves: 12 caves where bone fragments and stone tools left by ancient hunters were found in the 1940's. Some of the artifacts dated to 8,500+ years ago. Another area of interest is Devil Mountain Lakes: a series of large, most likely volcanic craters dating back to 21,000 years ago during the Pleistocene Ice Age. The craters were probably formed when lava pushed up into the permafrost and caused massive underground steam explosions. The technical term is "maar lake" and these are the largest maar lakes on Earth.

Visitors to Bering Land Bridge National Preserve need to be well-experienced in the vagaries of existence in the wilderness wonderland of tundra where it can (and often does) rain or snow on any day in the summer... winter is a whole other proposition. The wind can howl, the sun can be up or down 24 hours a day, the wildlife can be thick and dangerous (caribou, moose, black and grizzly bear, gray and Arctic wolves, red fox...) and forget firewood. 911 response times (from satellite phones, cell phones don't work) are measured in days.

The bunkhouse at Serpentine Hot Springs