The Castle Mountains rise above the Mojave Desert 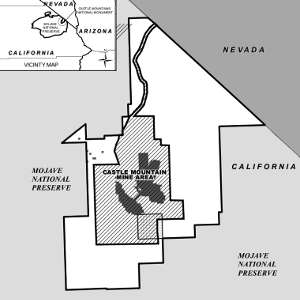 Castle Mountains National Monument protects about 20,920 acres of Mojave Deseet and mountains in southern California. The property is bounded on three sides by the Mojave National Preserve, the fourth boundary being aganst the Nevada state line. The National Monument came into being when President Barack Obama signed the Executive Order creating it on February 12, 2016.

Surrounded by the National Monument is the 8,340-acre Castle Mountain Mine Area. Inside that is an open pit gold mine, a project owned by the Canadian company Newcastle Gold Ltd. Their permit to mine ends in 2025 but between now and then they are allowed to remove almost 10 million tons of material from the hole, although the low price of gold caused them to stop mining in 2001. The language of the Executive Order states that after the mining and reclamation are completed, or after 10 years if no more mining occurs, the Federal land in the mine area reverts to the National Park Service.

The landscape is formed of early Proterozoic gneiss and foliated granites overlain with deep volcanic deposits. The Castle Mountains rise from the wide valley floor to a height of 5,543' at the summit of Hart Peak. The surface is rated as a high quality desert habitat featuring some of the finest Joshua tree forest in the Mojave along with pinyon pine and juniper woodlands in the higher elevations. There are also at least 28 species of native desert grasses on the property, about half of which are classed as rare. There are resident populations of desert bighorn sheep and other fauna on the property.

Cultural resources found on the property reflect many years of historic and pre-historic use by humans.

To get there: there are several unnamed/unmarked dirt roads in Lanfair Valley in Mojave National Preserve that reach Castle Mountains. There is also a road off of Nevada State Road 164 (Walking Box Ranch Road) that approaches the National Monument from the northeast. To reach the property you'll want a high-clearance vehicle, preferably with 4-wheel drive. The maps you see using GPS devices are notoriously inaccurate in the area, you'd be much better off with a good printed map...

Castle Mountains National Monument is open 24/7/365 but you won't find any services on the property. The visitor centers and campgrounds are at Mojave National Preserve. 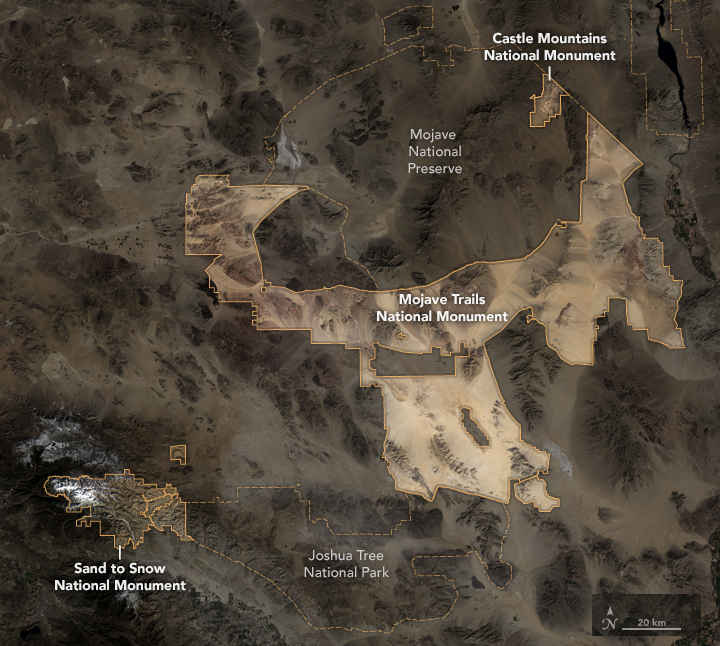