When it was first opened in 1927, Central High School was deemed to be "The Most Beautiful High School in America" by the American Institute of Architects. Little did they know that 30 years later, the school would play a prominent role in the desegregation of public schools in America.

For the first 30 years of its existence, Central was an all-white institution. That legacy was about to crack after the landmark Brown v. Board of Education decision made by the US Supreme Court on May 17, 1954. There was massive defiance of the Federal court rulings in the southern states after that decision was handed down so a year later the Supreme Court added "with all deliberate speed" to the first desegregation order. It still took a while for the implementation of those decisions to kick in but in the fall of 1957, nine African-American students in Little Rock insisted on their rights as American citizens to attend classes at Central High in Little Rock and forced a critical situation.

The controversy in Little Rock was an outgrowth of Arkansas Governor Orville Faubus direct questioning of the sanctity and authority of the federal court system in regard to the rulings delivered in Brown v. Board of Education of Topeka. Faubus went further in that he ordered the Arkansas National Guard to prohibit any African-American students from entering Central High School. Three weeks later, Federal Judge Ronald Davies ordered the troops removed as they were not being used to preserve law and order. The governor removed the Guardsmen and the Little Rock Police Department replaced them. A couple days later, those same police escorted nine African-American students into Central High, then shortly escorted them back out again "for their own safety."

The violent white mob at Little Rock Central High School that day compelled President Dwight D. Eisenhower to deploy federal troops in the city and the school the next day in support of the civil rights of those nine African-American students. He also had the Arkansas National Guard placed under federal orders. The day after (September 25, 1957), the "Little Rock Nine" were escorted into the school by federal troops and enjoyed their first full day of classes. Shortly, the Federal government was successful in getting the point across and in 1958, Ernest Green became the first African-American graduate of Central High School. Martin Luther King, Jr. hammered the point home further by attending that graduation ceremony as a guest of the Green family.

That wasn't the end of the problem, though, as segregationist forces rallied and did everything in their power to stop the integration of the Little Rock school system. Their shenanigans kept the Little Rock High Schools closed through the school year of 1958-59 as they formed legal committees and fought back and forth in the courts and in the streets to stop desegregation. In the end, they lost a close election and three openly segregationist members of the school board were removed from office and replaced by three moderates. On August 12, 1959, a segregationist rally at the state capitol was told by Governor Faubus that it was a "dark day" in history but they should not give up the fight. The segregationists then marched to Central High School where they were confronted by Little Rock police and firemen who broke up the mob. Twenty-one people were arrested. That put an end to the major disturbances in Little Rock...

In 1998, President William Jefferson Clinton signed legislation designating the school and the visitor center across the street as a National Historic Site. As of 2013, Central High is the only operating high school in the country to receive such a designation. 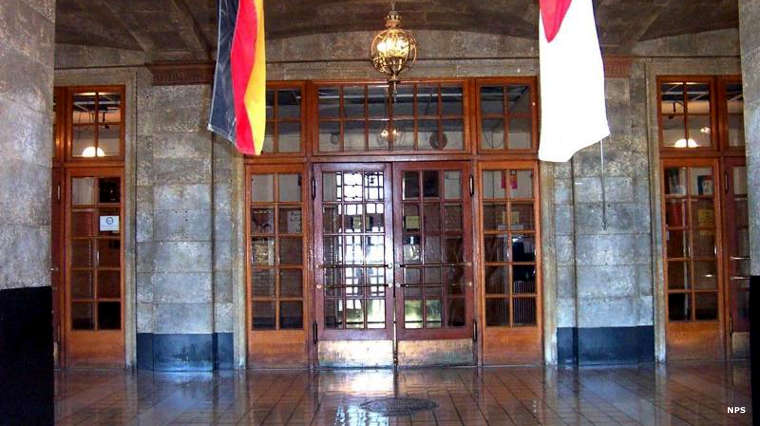