The view at Apache Pass 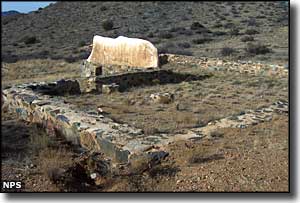 Fort Bowie was established in 1862 after a contingent of California Volunteers headed for the battle fronts of the Civil War ran into a war party of Chiricahua Apaches in Apache Pass. There had been a state of war between the American invaders and the Chiricahuas for a while already and that didn't finally end until Geronimo and his people surrendered in 1886. This was a good site for the fort because of the proximity to Apache Spring, a perennial water source in these otherwise dry mountains. Apache Pass is also on the dividing line between the Dos Cabezas Mountains to the north and the Chiricahua Mountains to the south. The Butterfield Overland Stage Company built a stone station on the east side of Apache Pass in 1858 and it was in operation until Congress ended the Butterfield mail-delivery contract in 1861.

The Chiricahua Apaches under Cochise had been camping in Apache Pass in the winter and spring for years. Then in January 1861, a local rancher accused them of raiding his ranch. The Army sent Lieutenant George Bascom and 54 men to confront Cochise. Bascom blew the whole thing out of proportion and hostages were taken on both sides. Then both sides killed their hostages. Cochise was so insulted in the whole affair that he began a war against the US immediately. About 5,000 deaths and eleven years later, Cochise was convinced to surrender to General Howard. He did that and the Chiricahuas were granted a reservation containing significant land in the Chiricahua and Dos Cabezas Mountains, including the area of Apache Pass.

Over the next couple years, Cochise would sometimes visit the Post Traders office at Fort Bowie and talk, trade and drink beer with the soldiers. Then he died in 1874 and two years later, the reservation grant was rescinded by Congress. That led to a war with Geronimo in charge of the Chiricahuas. That war didn't end until 1886 and when the shooting finally stopped, the Chiricahuas were collected up and shipped to places in Alabama and Florida. A few years later they were allowed to return to their homeland but significant amounts of it had already been homesteaded. With the local frontier essentially pacified, Fort Bowie was finally abandoned in 1894.

Fort Bowie National Historic Site was established in 1972 on about 1,000 acres around the ruins of the old fort and stretching west to the site of an old wagon train massacre.

There are hiking trails in the park but no hunting or camping are allowed. Metal detectors and digging tools are also banned.

To get there: Go southeast from Willcox on State Road 186 for 20 miles. At Apache Pass Road turn onto the gravel road and go about 8 miles. That will put you at the parking lot for the Fort Bowie Trailhead. From there it's a three-mile round-trip hike to the Fort Bowie ruins.

Fort Bowie National Historic Site is open from sunrise to sunset every day of the year. The visitor center is open from 8 am to 4:30 pm daily except for Thanksgiving and Christmas Days. Peak visitation season is March to May. There are no entrance or user fees involved. 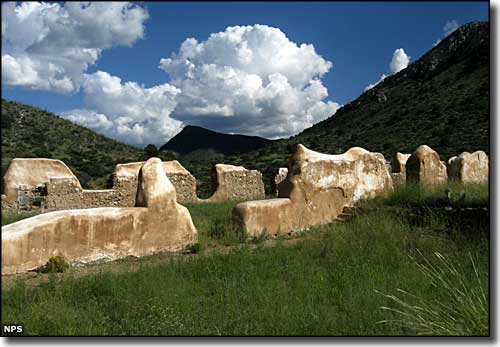 Remains of the cavalry barracks at Fort Bowie 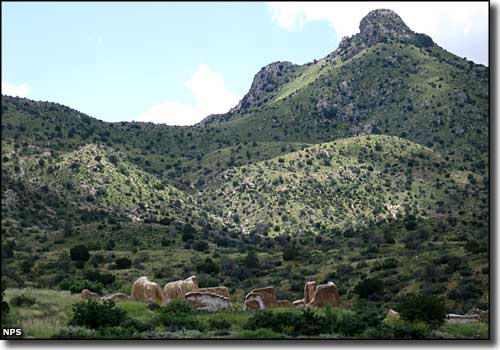