From the Desert to Tall Pines Scenic Road

Looking down on Roosevelt Lake, from the Desert to Tall Pines Scenic Road

Just above the Honey Creek Divide is where you'll find access to Sierra Ancha Wilderness on the east and Salome Wilderness on the west. Both areas are characterized by sheer cliff walls, fast-flowing streams in slot canyons with many high waterfalls and more than a few ancient ruins. The side road leading to Aztec Peak is signed and easy to drive for the first couple miles but you want to be careful with it: all of a sudden it gets really narrow and hugs the cliff face as it rises through a series of hairpin turns to its terminus just below the upper peak. At 7,694', Aztec Peak is the highest point in the Sierra Anchas. The fire watchtower on top of the peak gives some incredible, 100-mile views. Sierra Ancha Wilderness wraps around Aztec Peak on the east and south, dropping away into the deep canyons below. Nearby is Workman Creek Falls and there's an easy half-mile trail leading to a viewpoint of it.

If you decide instead to venture into Salome Wilderness, there's a signed road giving access to the upper end of The Jugs: a slot canyon that drops deep into the heart of the wilderness and eventually leads out onto the level areas around Roosevelt Lake. It's one of those places where half your hike will be in the water and returning the way you came is almost impossible.

A bit further north on From the Desert to Tall Pines Scenic Road is the Sierra Ancha Experimental Station, a research facility where scientists and forest rangers work to improve the viability of the forest and the large numbers of wildlife that live there. Which reminds me, this area has more deer, bear, mountain lion and other big game than virtually any other area in Arizona. 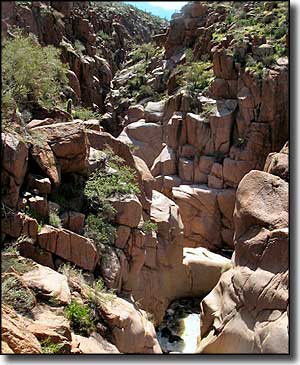 Once you get north of McFadden Peak, you start coming into cattle country. The area around Young was home to the Pleasant Valley feud back in the late 1880's. That was a feud between two families: the Grahams and the Tewksburys. The fighting started because of bad blood between the two but the main excuse was the on-going western range war between cattle ranchers and sheep herders. Between 1887 and 1892 at least 19 people were killed. There may have been others involved but those 19 were definitely attributed to the feud. The final victim died in 1892, gunned down in the street in Tempe, where he'd moved to get away from the fighting. But some of the folks involved in the Pleasant Valley war were hired guns who were also involved in the Johnson County War in Wyoming (which was between big cattle ranchers and small homesteaders).

North of Young, the road starts to rise again, heading up and over the Naegelin Rim (so-named for a local rancher who was smart enough to keep himself and his family outside the Pleasant Valley feud). Once on top of Naegelin Rim, the road levels out and makes an easy run through the open Ponderosa forest to the pavement at State Road 260. In the Naegelin Rim area are several dirt forest roads that give access to the upper reaches of Hellsgate Wilderness to the west. Hellsgate is another of those deeply cut areas in the Mogollon Rim where once you commit to following a route, you're committed to following it all the way out the other side. When I was a teenager, I went camping with some friends at Christopher Creek (just north of Hellsgate Wilderness). One day we decided to travel a bit down the creek, going from water hole to water hole into what we thought was a short box canyon. We were seriously wrong and almost didn't make it back out. That was back in the days before there was an official wilderness declaration in this area but if we'd seen the signs the Forest Service usually puts up at wilderness boundaries, we might have been saved a lot of trouble. 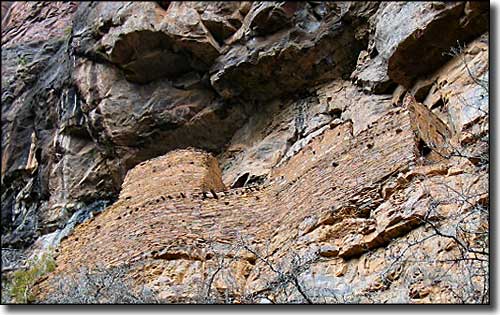