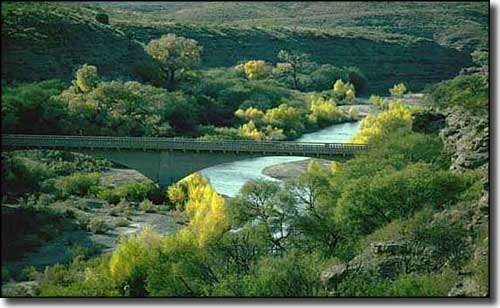 Crossing the Gila River on the Black Hills Backcountry Byway 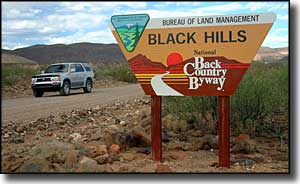 The Black Hills Backcountry Byway is a 21-mile drive through desert emptiness in southeastern Arizona. Perhaps I shouldn't say "emptiness," all that desert scrub-filled landscape is bisected by the riparian zone along the Gila River. And it's right next to that bridge over the Gila that the Gila Box Riparian National Conservation Area begins. But this is a dirt/gravel road that asks for visitors to bring a high-clearance vehicle with them. If it's dry you don't need 4WD but if it's wet... sometimes no amount of 4WD helps. If you chose to explore any of the single track roads that lead off into the countryside, you'll definitely want high-clearance 4WD.

Sections of the route are curvy and winding, and drop-offs on one side with cliffs on the other are the norm in the volcanic uplands of the Guthrie Peak area. There usually isn't much for traffic but you know, if there is traffic, you'll find it at the worst possible place on the road...

The Mogollon people lived in this area 1,000 years ago. More recently this has been the homeland of the Western and Chiricahua Apache. In his search for the Seven Cities of Cibola, Francisco Coronado led his men through these hills in 1540. The next recorded European explorer in this area was a mountain man named James Ohio Pattie, who came to trap beaver along the Gila in the 1820's. In late 1846, early 1847, Kit Carson guided General Stephen Watts Kearny and some of his Army of the West through these hills on their way to California. Ranchers and farmers dribbled into the area in the early 1870's, then a large copper deposit was found at Clifton. It wasn't until 1914 that construction on an actual, usable road between Clifton and Safford was begun. What's left of that road is now the Black Hills Back Country Byway. Using prison labor, it took six years to build the road. The impetus for building the road was to get agricultural produce from the farms around Safford to the many miners working at Clifton and Morenci.

The Black Hills are at the northern end of the Peloncillo Mountains. The Peloncillo's are of volcanic origin, thrust up through layers of sandstone so that now there are eroded deposits of sand and gravel above the lower bajadas and below the upper lava outcroppings. Eight miles of the route (six miles at the north end, two miles at the south end) are through this geological zone of gravel and sand. That thirteen miles of road in the middle are up on the lava flows surrounding Guthrie Peak. And I say "lava flows" where the ground is actually a multi-colored mix of gray-brown and dark gray lava with light gray (sometimes tinted yellow or red) ash deposits.

The lower elevations are Chihuahuan desert with typical creosote bush shrubbery and nocturnal reptiles and mammals (kangaroo rats, lizards, roadrunners, diamondback rattlesnakes). Once you get above that sand and gravel, you enter a zone of desert grassland. In that grassland you might find coyotes and Gambel's quail. This is also where most of the kestrels and red-tailed hawks hang out. In the highest areas of the byway you'll be in a community of oak, pinon pine and juniper. The underbrush here is very thick, although this is where you'll find the mule deer and javelina hiding out. The only place where you'll find willows, bulrushes, cattails, sycamores or cottonwoods is in those strips of vegetation along both side of the Gila River, and sometimes flooding on the Gila can wipe all that out, too.

Near its southern end, the Black Hills Backcountry Byway crosses part of the Black Hills Rockhound Area, an official collection site where many fine fire agates have been found. Camping and picnicking are allowed along the Byway and several developed sites are available. About midway on the route is the Canyon Overlook Picnic Area with shaded ramadas that look out over the Gila River Canyon. Perched on a cliff above the Gila River crossing is the Owl Creek Campground, part of the Gila Box Riparian National Conservation Area. The campground offers 7 campsites with picnic tables, shade ramadas and cooking grills. Restrooms are nearby in the camping area. Fees are $5 per night per site. Just down the hill beside the bridge is a favorite launch site for folks rafting the Gila River through the RNCA. Rafters need to pay a $3 fee per person before embarking on the river, and it would be good if they didn't spend more than 5 days making their run downstream. 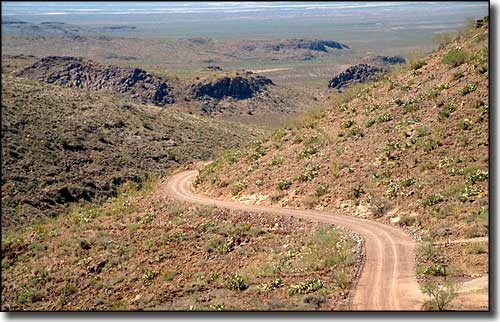 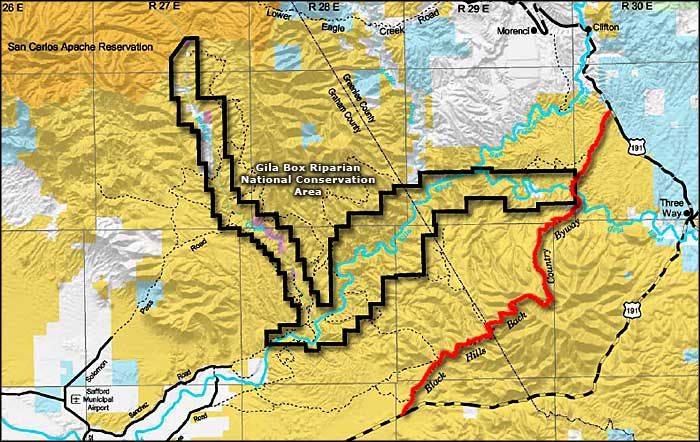