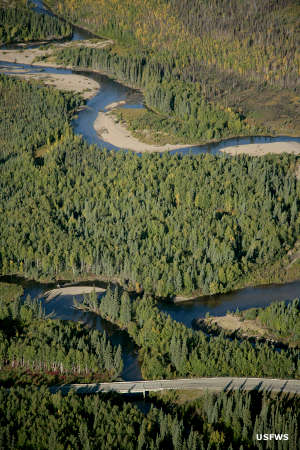 Koyukuk National Wildlife Refuge is a 3.5 million acre property in northwestern Alaska. The southern boundary is parallel to the Yukon River, the northern boundary is in the Purcell Mountains and the foothills of the Brooks Range. The heart of the property is the floodplain centered around the meandering Koyukuk River. This is an area rich in wetlands, excellent for the raising of moose and waterfowl (in season).

The rivers here support sheefish, arctic grayling, Dolly Varden, northern pike and three species of salmon. The northern pike are so well fed they often grow to record size. In the wetlands around the rivers, summer will find hundreds of thousands of migratory waterfowl nesting, feeding and raising their young. The summers tend to be short and lush with very long days, so the waters support plentiful water plants and hordes of protein-rich, blood-sucking insects... hint, hint.

The Koyukuk River is a major tributary of the Yukon River, the last major tributary emptying into the river before the Yukon itself empties into the Bering Sea. This is in the huge roadless area of northwest Alaska, where most travel is done by air or boat. Access to the Refuge usually means flying into Galena from either Fairbanks or Anchorage, then chartering either a small plane or a boat to reach the property (most moose hunters travel by boat, it's a lot easier to get their game back out that way). Local folks mostly travel by boat in the summer and snow machine in the winter.

The Koyukon Athabascans have lived in this area for centuries and still have six main villages on and around the refuge: Galena, Nulato, Koyukuk, Kaltag, Huslia and Hughes. Around these villages there are significant amounts of private property to be aware of. There are other private parcels spread throughout the refuge, especially around mining operations. Because the Koyukuk NWR has become so popular in recent years with commercially guided fishing and hunting outfits, land use and game controversies are heating up. 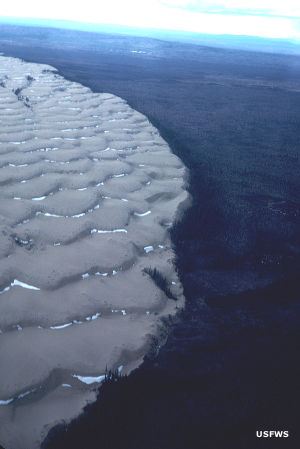 The Koyukuk Wilderness is a 400,000-acre designation covering what is probably the most productive moose habitat in all of Alaska. Moose are large ungulates who require a lot of food, enough to require large amounts of space capable of growing that food. Koyukuk Wilderness has so much of that moose lunch that in good years, the property can sometimes support as many as ten moose per square mile, although present stats say there are generally five (or more) moose per square mile. The Three-Day Slough area is where you'll find the moose.

The Galena Mountain Caribou Herd, a non-migratory group, live on the refuge year round. There are only about 300 of them and their range doesn't really overlap that of the resident moose population. The migratory Western Arctic Caribou Herd, a group that numbers as many as 450,000 individuals, often move into the northern areas of the Koyukuk Wilderness in winter, looking for lichens and forbes under the snow.

Koyukuk also supports the usual population of wolves, lynx, red fox, river otters, beavers, martens, minks, muskrats, grizzly bears and black bears. Something to be aware of is the deeper bodies of water here don't freeze solid in winter, nor do the newly formed inside banks of the river channels. That means the permafrost isn't ubiquitous. It also means the waterways tend to be lined more with willows, alders, cottonwoods and white spruce, with black spruce growing further back from the banks. It's among the black spruce that you'll usually find the usual bogs, grass lakes and tundra.

An interesting landform found on the Koyukuk Wilderness is the Nogabahara Sand Dunes, sands that blew in and were deposited here after the glaciers receded at the end of the last ice age. The sand dunes support a unique and very fragile ecosystem with most plant species (grasses, sedges, willows and herbs) growing in the sheltered basins between the individual ridges. There are also some areas of dwarf birch, alder, white spruce, crowberry and blueberry. Some theories posit this area as having been a glacier-free shrub-steppe ecosystem during the last ice age. Deposition of sand is still happening, the dunes are still moving, and some of them reach as much as 200 feet high and 300 feet long. The dunes are in one of the more inaccessible areas of the Koyukuk National Wildlife Refuge and cover an area of about 16,000 acres.

Koyukuk NWR is administered as part of the Koyukuk/Nowitna NWR Complex. 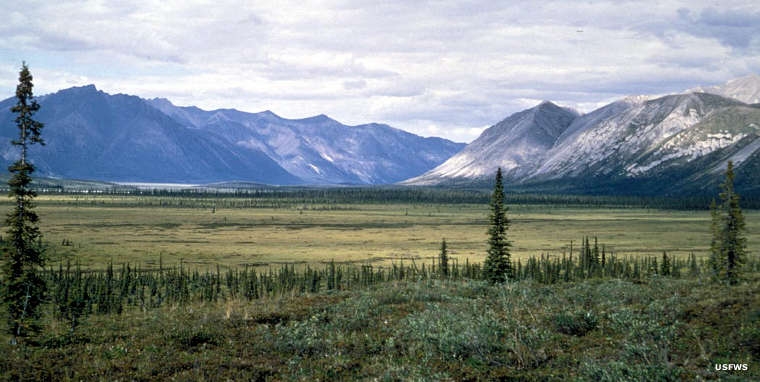 A placer mine operation on Koyukuk NWR 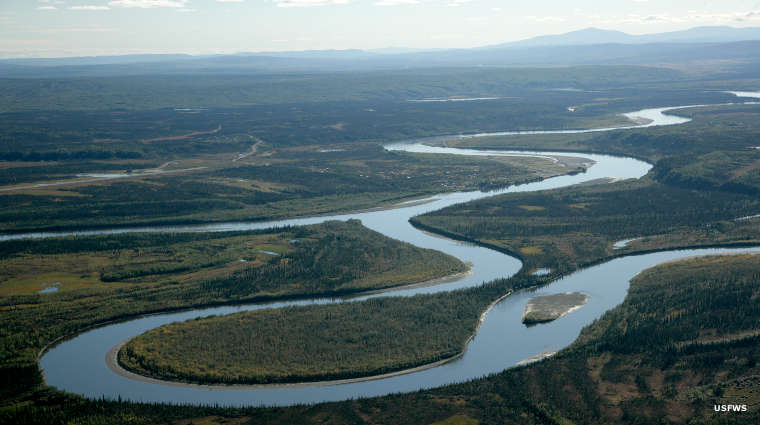 Confluence of the Alatna and Koyukuk Rivers 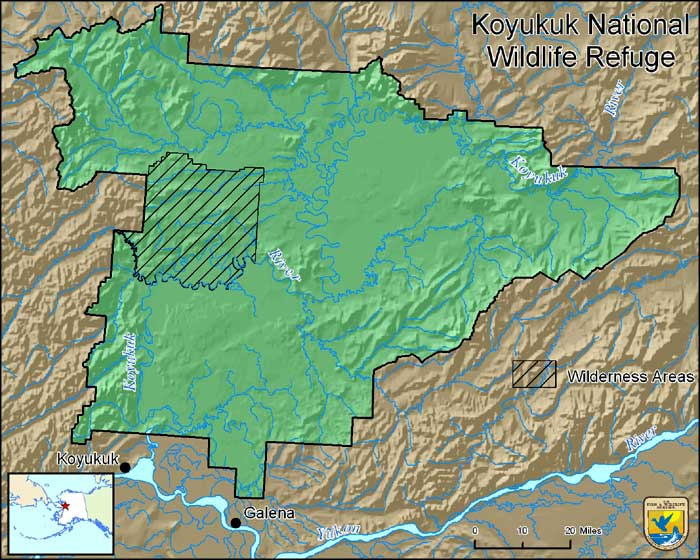