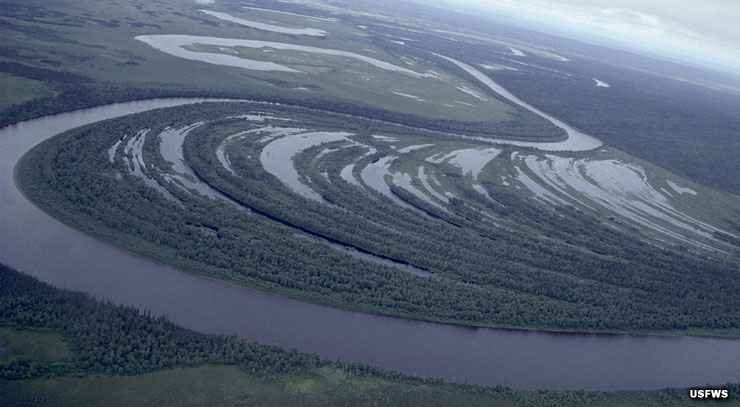 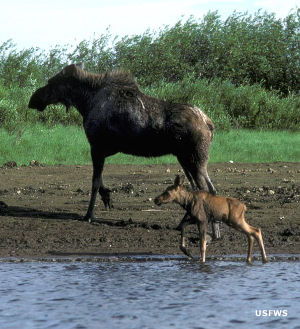 As the fifth largest refuge in the National Wildlife Refuge system, Innoko National Wildlife Refuge contains some 3,850,481 acres of land split into two sections. The northern section is adjacent to the Yukon River and contains about 751,000 acres of wetlands and rolling hills. The main section is a bit further south in western Alaska and contains within its boundaries the 1,240,000 acres of the Innoko Wilderness Area.

Innoko NWR is basically composed of two habitat types: about half is rolling hills covered with white spruce, balsam poplar, white birch and aspen (typical boreal forest). The other half is wet meadows, sedge and horsetail marshes and larch/black spruce muskeg interspersed with numerous ponds and lakes. Nowhere is the property even 1,000 feet above seal level. The NWR is located in the transition zone between the treeless tundra of the Yukon-Kuskokwim Delta area and the forested taiga of central Alaska.

This kind of habitat is a huge draw for hundreds of thousands of migratory waterfowl. It's estimated that more than 130 species of birds use the property for resting, nesting, feeding and/or raising their young every year. At snowmelt time, the Innoko River and all its tributaries frequently flood, fertilizing a lot of that wetlands habitat. The flooding also helps to maintain the rich sandbar/willow habitat that makes the moose population here keep growing. You'll also find black bear, grizzly bear, gray wolf, red fox, beaver, mink, pine marten, wolverine, coyote, lynx and river otter on this property. The Beaver Mountain Caribou Herd often comes to Innoko NWR in the winter when the snow on the uplands gets too deep.

The Innoko National Wildlife Refuge is not accessible by car. Most visitors come in in float-equipped aircraft during the spring, summer and fall. The NWR is so remote that access by boat isn't practical, although some folks fly in with inflatable watercraft and folding kayaks. McGrath is the usual transition point and there are several charter operators there that can help if you wish to make the trip.

The 1,240,000 acres of the Innoko Wilderness are located in the southeastern part of the Innoko National Wildlife Refuge. The wilderness is bounded on the west by the Innoko River and includes portions of the Big and Litte Yetna and Iditarod Rivers. This is an area so rich in wetlands that more than 20,000 beavers live here, making this the most densely beaver-populated area in Alaska. Those wetlands also attract a lot of moose, muskrat, river otter and black bear.

Once upon a time (back in the very early 1900's), there was a gold rush in this area. And as usual with gold rushes, there was a blast of people coming in and then leaving again within a few years. But sometimes, history intrudes on the old places and here, it comes back again every year in the form of the Iditarod National Historic Trail Dog Sled Race.

As portions of that famous (and now designated National Historic) Trail cross through the Innoko Wilderness, the US Fish & Wildlife Service has recommended establishing a 100-foot-wide-or-wider administrative corridor along the primary historic trail route to facilitate management of the trail. Further, the Iditarod National Historic Trail Comprehensive Management Plan also identified Dishkakat, Dikeman and Shermeier's Halfway Road House as sites requiring priority management. The sites at Simels and Dishna were identified as needing secondary management, while fourteen other sites along the trail qualified for minimum management. Most of these sites have been surveyed for their archaeological and historical value and lists of the remaining man-made structures at these sites have been submitted for listing in the National Register of Historic Places. Among the various plans on the table are proposed actions that include the surveying of the historic trail, re-marking the historic trail with tripods of some sort and the possibility of building trail shelters along the route. At the present time, the Iditarod Sled Dog Race is shunted onto trails just outside the wilderness area's southern boundary (in odd-numbered years) and outside the eastern boundary (in even-numbered years). 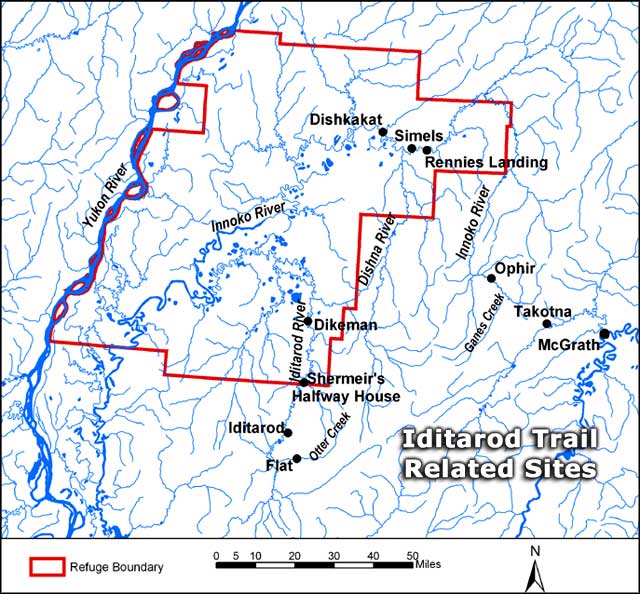 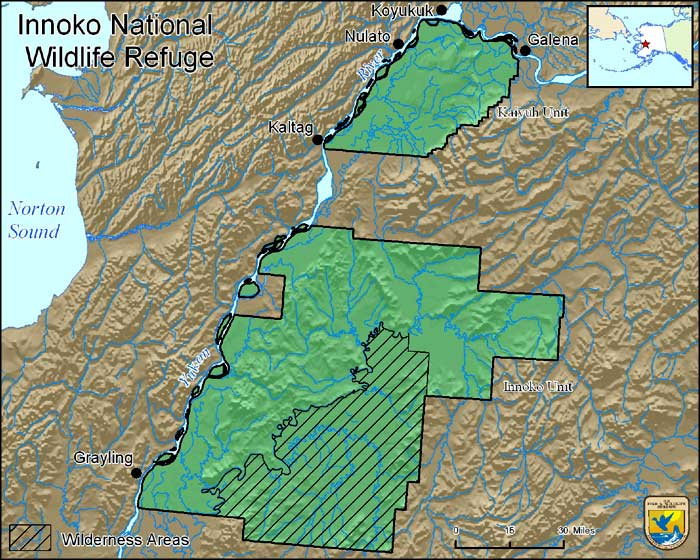