The view of Denali from Wonder Lake 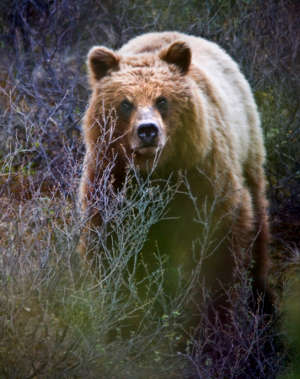 After much fumbling around about the name, Denali National Park and Preserve came into official being with the Alaska National Interest Lands Conservation Act, signed into law by President Jimmy Carter in 1980. The National Park contains more than 6 million acres but only some 4,724,735 are federally owned. The National Preserve is similar: 1,334,200 acres of which only 1,304,132 acres are federally owned. With the declaration of the park as "Denali" also came a designation of 2,146,580 acres within the park as official wilderness.

The property is a large mix of habitats ranging from deciduous taiga and heavy forest in the lower elevations through vast areas of tundra to areas wholly of rock, snow and hard glacier. Coupled with that range of habitat is a large range of birds and mammals: black bear, grizzly bear, gray wolf, Dall sheep, caribou, beaver, marten, fox, wolverine, lynx, marmot, pika, ground squirrel and snowshoe hare. In the glacier-fed streams and lakes are ten species of fish, trout, arctic grayling and salmon prominent among them. Among the many species of migratory birds you might see Arctic warblers, wheatears, pine grosbeaks, waxwings, owls, gyrfalcon, Ptarmigans, tundra swan and golden eagles.

Treeline at Denali tends to run around 2,500 feet in elevation so most of the park is treeless. In the treed areas you'll most likely find spruces and willows but with all the permafrost in the ground, they tend to grow at a distance from the mountains. This is the Alaska Range: the mineral content of the soil and the general lack of soil discourage anything but the most hardy of alpine tundra and wildflowers from growing. But you will find blueberries, mosses, ferns, grasses, goldenrod, bluebell, lupine, fireweed and gentian (to name a few of the more than 450 species of plants on the property). The south slopes of the range are wetter, receiving a lot of moisture from the Gulf of Alaska. But that moisture doesn't make it to the north slopes of the range. That general air flow also tends to keep the southern slopes warmer, the northern slopes much colder.

There is only one road in the park and that runs 91 miles from the junction with the George Parks Highway to the mining camp at Kantishna. Only the very beginning of the road is paved and only the first 15 miles are available to citizens in their private vehicles. Beyond that point, all vehicular travel is accomplished through the medium of concessionary buses. There's good about that: sections of the one-lane gravel road run along the edge of sheer cliffs with no guard rails...

As for Denali itself: 20,320 feet high at the top. That's a vertical relief of more than 18,000 feet, highest vertical relief on the planet. As the Alaska Range was pushed up by the continuing convergence of the Pacific and North American tectonic plates, Denali is still growing at about 1 mm per year.

There are six campgrounds on the park, some for RVs only, some just for tents. In season they will probably all be easier to deal with if you make reservations well in advance. The RV sites seem to run from $22 to $28 per night, depending on the size of the RV. The tent sites all pay a single $4 fee for the reservation, then from $9 to $16 per night. Back country camping is available but don't make any plans yet: you'd be better to wait until you're face-to-face with a ranger to do that. The park is about the size of Vermont and there are only a handful of established trails... and most of those are very close to the park's entrance.

View along the Denali Road